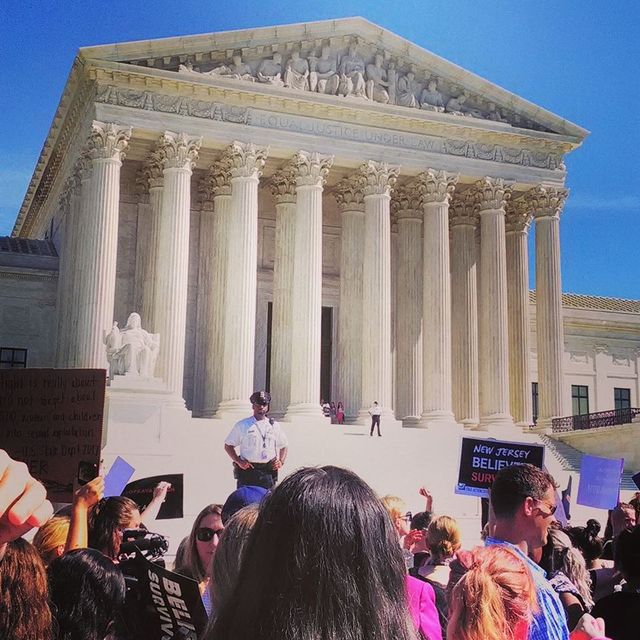 In the weeks leading up to Brett Kavanaugh’s confirmation vote, hundreds of individuals took to Washington, D.C. to protest and visit the offices of senators like Susan Collins and Lisa Murkowski. BUST caught up with one of them, longtime activist and creative Mari Gustafson, to chat about her experiences getting arrested twice during the D.C. protests—and how we can keep fighting.

“I’d been on national calls with the Center for Popular Democracy and the Women’s March to find out which days they really wanted people to travel to D.C. to make the most impact,” Gustafson tells BUST. “The first day I went down [from New York] was the Monday before Christine Blasey Ford spoke, just to amplify her message. On the Thursday that she spoke, we decided not to protest, because we wanted the lead in the news to be her testimony.”

That Monday, protestors tried to bird-dog senators, a strategy that includes persistently asking pointed questions about how a senator will vote. Anyone is also allowed into the offices where, as Gustafson explains, you can read a statement and share your opinions for as long as you want to. The senators aren’t necessarily there, but will sometimes appear if you’re lucky—and either way, you have an opportunity to speak to their staff.

Gustafson and her fellow protestors arrived at the offices with a plan. “We wanted men to be arrested with us in solidarity—we started with men recounting their Me Too stories, and for one of them, it was the first time he’d ever told it. We focused on the men just as a call to action for them to start speaking in unison with their sisters,” she says. “We desperately need male allies to speak with us, and we wanted that arrest to show that men were with us.”

Though Kavanaugh’s ultimate confirmation onto the Supreme Court was a blow to women everywhere, Gustafson was quick to clarify that sexual assault and rape culture can affect—and spare—people of all genders. “There are women out there who are the good Republican women,” she tells BUST. “Those women have no idea why we’re so upset. Kellyanne Conway has no idea why I’m so upset, and why I didn’t call the cops when I was sexually assaulted twenty years ago; she doesn’t understand why there is no evidence.”

Gustafson and around 120 other people were arrested that first day, and brought to a place called the Shed, where they waited several hours to be released. When Gustafson returned to D.C., though, she was one of nearly 300 who were detained. “The second arrest was the Thursday before the vote,” she says. “We really wanted to see if we could influence people before the vote, and wanted to go to the steps of the Capitol, but the police blocked off our access, so at the last second we decided to go to the Senate offices and we got arrested there. When they arrest that volume of people, they don’t even take you to the Shed—they take you to the park. You just sit in the park for three hours. The experience was really surreal.” 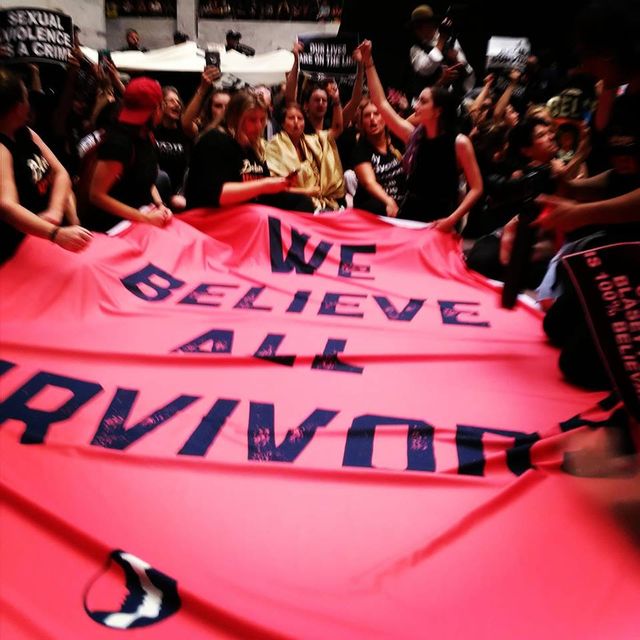 Gustafson has been through all of this before, though. An advocate with direct action group Gays Against Guns (GAG) New York, she devotes much of her time to fighting for justice and safety, and spent time in jail last year for protesting with GAG after the Las Vegas shooting.

“I was raised in western Colorado, which has extreme gun culture. I’ve had a gun pointed at me by a family member; I’ve had to hide in a place of work because a gunman was trying to get in. I’ve lost four friends,” Gustafson says. It was after the 2016 Pulse shooting in Orlando that she first heard about GAG, and immediately got involved. With her background in art and fashion, Gustafson was able to help the group create spray-painted t-shirts, which they ultimately brought to Pride.

“It was all this spray-painted craziness that we had created together, and then there was a procession of 49 people, all holding signs to represent those who had died, led by a gigantic disco ball on a pole,” she says. “Everyone was dressed in all white, and that image made it to the front of The New York Times the very next day. I thought, okay, if I can help make history, then I should keep this up. America needs to fucking see this shit. So I felt like I actually did something, that I did contribute, that something good came out of my creativity.”

If you’re looking to get involved—no matter whether or not you’re willing and able to get arrested—Gustafson is full of advice. “The most important work is on the local level. And you know, the Democratic Party, are they my favorite party? They’re not. But they’re certainly going to help you out a lot more than the Republican Party,” she shares. “Just try to find like-minded people, and definitely follow the Women’s March. It’s a trustworthy organization, and I think that they’ve done a lot. There are Women’s March chapters all over the country, and if there isn’t one in your small town, you can maybe travel to the capital of your state. You can write letters to your congresspeople, you can go out and knock on doors.”

The most important part, though, is reaching people—something Gustafson knows how to do. “Maybe someone will see me in the media and say, ‘she’s like me.’ I want people to identify with me, and maybe that will get to that woman in Kansas, that woman in Colorado, that woman elsewhere in the country,” she says. “Not everybody has to get arrested. I don’t even encourage that. But there’s always some way, even if it’s just talking to your neighbor about politics and why you feel the way you do. Every little bit helps.”

In Egypt, Women Are Being Jailed for Sharing their #MeToo Stories

Tags: Mari Gustafson , Gays Against Guns , protesting , activism , Gays against Guns, , Mari Gustafson , protesting , activism , Kavanaugh
Support Feminist Media!
During these troubling political times, independent feminist media is more vital than ever. If our bold, uncensored reporting on women’s issues is important to you, please consider making a donation of $5, $25, $50, or whatever you can afford, to protect and sustain BUST.com.
Thanks so much—we can’t spell BUST without U.