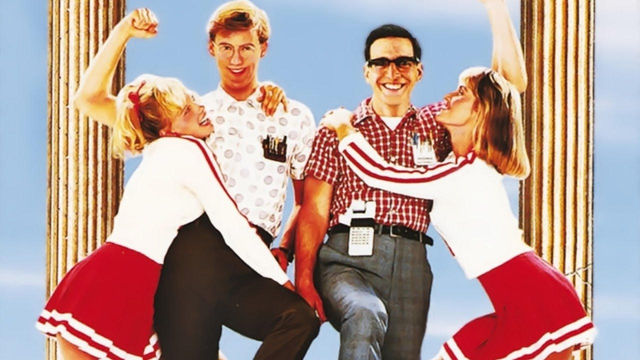 The year is 1986, and I am around eight years old. I am sitting in my living room in Brooklyn watching Revenge of the Nerds with rapt attention. My mother is not around; perhaps she is passed out or out of the apartment altogether as she often was due to her retreat into the depths of her heroin addiction. I am alone watching this movie on a mainstream (non-cable) station during prime-time hours on a weeknight. Yet even among those who have the privilege of being raised with more present parents, it seems that almost all my peers are also watching this film because it would be widely discussed at school the following day.

Over the next couple of hours, I watch mesmerized as the male characters on the screen raid a women’s sorority to steal their underwear and, while doing so, secretly set up surveillance cameras. They then sit around their own fraternity eating popcorn while watching women undress and shower, completely unaware they are being spied on. Even at my young age, I wonder whether that is legal because it somehow seems wrong although the tone of the scene tries to convince me that it isn’t. These women were bitches after all, and this was them receiving their just desserts. Since this isn’t on cable, the nudity is cut out, though there are still scenes aplenty with scantily clad women. The message it sends me is that certain real body parts are too shameful to be fully exposed on TV but that what the fictional men (that is, the heroes) are doing to those body parts — ironically disembodied from the very people to whom they belong — is not.

The final act of the film culminates in an actual consummation. Lewis, the main protagonist and nerd, dons a Darth Vader costume during the Greek Homecoming Festival — having stolen the one his jock rival had worn earlier— and, pretending to be said jock rival, has sex with his cheerleader girlfriend. I shift uncomfortably on my couch, intrigued at the idea of sex but feeling icky at the thought of being tricked into having it with someone other than who I think it to be. And yet, when Lewis unmasks himself after the sex is over, the woman’s surprise (and what seems a quick flicker of displeasure at being swindled into having sex with him against her will) is immediately replaced with delight. Her irritated gasp of “You’re that nerd!” is followed a second later by a sexy smile and the purring proclamation, “You were wonderful!” She falls madly in love with him in minutes, undeterred by his deception. Her newfound feelings for him also aren’t spoiled somehow by the fact that he has had topless snapshots of her imposed on hundreds of pie tins at the same festival to be leered at by countless patrons right as Lewis was having intercourse with her. Her infatuation with him after sex hinges on him being a great lay. So great that it doesn’t matter that she didn’t really consent to it beforehand. I wonder: If he hadn’t been so great, how would it have played out? Would it simply have been another revenge twist we’re supposed to accept as justified and laugh off?

I didn’t have the words all those years ago to define what I saw on television, which, again, gave me a distinct impression of sleaziness even though I was only a child. But I do now: It was rape.

That was the first time I saw that film, but I also caught snatches of it repeatedly over the next few years, often aired on weekend afternoons just a few hours after my morning cartoons wrapped up. I have watched it so many times, the scenes that startled me at first dulled with repetition. I became desensitized to and even grew bored of them. There were also lots of other movies like Revenge of the Nerds during the 1980s. So many, in fact, that all these years later, I have a hard time telling them apart. They were so common that they were their own canon. These movies had paper-thin plots and were mostly a mishmash of scenes revolving around trying to get women’s clothing off — mostly through trickery — and perhaps bedding them — again, through trickery.

There was the Porky’s series, in which the VHS cover of the film has a picture of a man’s eye staring through a peephole, surreptitiously watching a naked woman in the shower. I don’t remember if it was a Porky’s sequel or one of its many knockoffs, but I vividly remember a scene in one movie where a man purposefully uncorks a bottle of shaken-up champagne and soaks a woman’s jumper outfit, playing it off as an accident. She strips it off for him to wash for her, leaving her in only a bra and panties. When he later says or does something that angers or insults her (and if I recall correctly, I believe it’s related to him “losing” or “ruining” her jumper), she goes to the closet to get her coat and leave — but, surprise! — someone is in there with a camera to take a picture of her in her underwear. She’s fuming, and we’re supposed to laugh at her expense and cheer on the boys for the naughty photo they can now jerk off to or blackmail her with later on. After all, she refused this man’s advances, so this is her comeuppance.

There is also the Scott Baio flick Zapped!, the entire premise of which is a teen who develops telekinesis and uses it solely to strip women against their will. The cover of that VHS is Scott Baio and Willie Aames (who plays his best friend in this film as he did for years on the sitcom Charles in Charge), watching from a window as a woman is floated up and her skirt is raised high to reveal her ass. We do not see her face, only the bottom half of her.

These movies taught me that I didn’t really know what I wanted; the boys and men did. 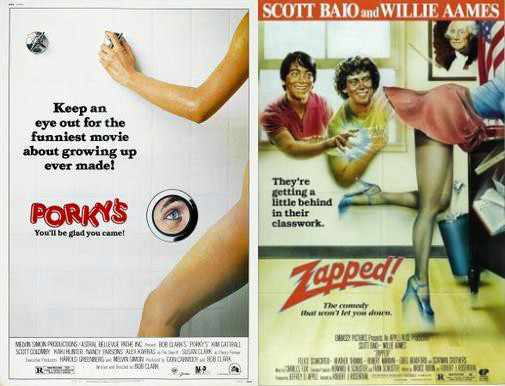 In the late years of the decade, I developed my first real celebrity crushes on the two Coreys — Haim and Feldman — and I voraciously devoured their movies, watching them so many times I could repeat their lines by heart. These films were not the raunch-fests of those I describe above. And yet: There is a scene in 1988’s License to Drive when the inebriated female character (played by a young Heather Graham) that Haim’s protagonist pursues throughout the film, puts her head in the lap of his best friend, played by Feldman. Feldman’s character then unlaces the top of Graham’s dress and begins snapping photos of her breasts. Don’t ask me why a large flash camera is somehow conveniently on hand in the backseat of the car where they both are, but again, it’s played for laughs. Unlike in the other films, this female is not portrayed as a bitch nor the act as one of revenge; what makes her deserving of this treatment is her simple incapacitation due to alcohol consumption.

By the time License to Drive was released, I was already in the midst of puberty — I now had breasts and had had my first period. I was still figuring out myself in regards to my sexual identity and desires. But pop culture taught me that if I had a burgeoning romantic interest in boys (which I definitely did), I should make myself vulnerable to them and accept their advances regardless of what (or who) I actually wanted. In fact, these movies taught me that I didn’t really know what I wanted; the boys and men did, and they were supposed to make such decisions for me. And if I acted in a way they didn’t like or rejected them, it was justified for them to do whatever they wished to get back at me, whether that be taking pictures of me in states of undress or having sex with me without my express approval or even awareness.

It is no wonder why I eventually became a target of vicious harassment and pranks of the boys I dared to spurn in my middle school years who were weaned on the same pop culture fare I was and learned the same lessons. Because of this, I shrunk from dating for much of my teen years. The risks were too great, and I craved freedom from these expectations. Still, my education was more of an indoctrination. I struggled to separate myself from the stereotypes and the so-called norms branded into me by television and movies, yet I still often found myself thinking certain things were okay that I now know were not.

Many men who, like Brett Kavanaugh, came of age in the 1980s are now climbing up or fully claiming the upper levels of power in this country. In many ways, the behavior alluded to in Kavanaugh’s high school yearbook and calendar both exposes and embodies the lack of ethics and generally warped sexual standards that defined the era that marked his adolescence and young adulthood. His alleged sexual misconduct in high school and college is a reflection and byproduct of the decade, but it also existed well before.

But it is actually bodily autonomy that is at the core of my concern and, more specifically, the still-shaky concept of it when it comes to women. In the 1980s, the dominant message woven into the very fabric of our culture was that women weren’t entitled to it. And we’re still feeling the consequences of that message today like a bitter legacy. We continue to pay the price for it in a society that elects men who brag about committing sexual assault to the White House and confirms those who are credibly accused of it to sit on our nation’s highest court, deciding cases that will determine women’s rights to be in charge of decisions regarding their own bodies for decades to come.

Until we start to understand and call out rape culture for what it was and very much still is, in all its supposedly innocuous forms, we will never succeed in creating an atmosphere where women have access to an equal playing field — whether that be in the bedroom, the academic or professional arenas, or anywhere for that matter. Rather, we will perpetuate a pattern where a woman’s word is still usually treated as suspect and wrong and thereby contribute to the indoctrination of another generation into rape culture.

This post originally appeared on Medium and is reprinted here with permission. Read Laura Kiesel's other Medium essays, "The Kavanaugh Case Illustrates Exactly Why Survivors Don’t Come Forward," "Kavanaugh’s Confirmation And #MeToo At A Crossroads: Why This Moment Matters."

Top photo: Revenge of the Nerds

Rape Culture Is Very Real; We Are Not Hysterical

Laura Kiesel is a freelance writer whose bylines have appeared in Politico, The Atlantic, The Guardian, Salon, Vice, Self, Vox, and many other outlets. She covers economics, feminism, the environment and health. Find her at Medium at and on Twitter at @SurvivalWriter.

Tags: pop culture , rape culture , Revenge of the Nerds , License to Drive , 1980s
Support Feminist Media! During these troubling political times, independent feminist media is more vital than ever. If our bold, uncensored reporting on women’s issues is important to you, please consider making a donation of $5, $25, $50, or whatever you can afford, to protect and sustain BUST.com. Thanks so much—we can’t spell BUST without U.