Ruth Bader Ginsburg Looks Nauseous During Brett Kavanaugh’s Swearing In Ceremony, And The Internet Is Like, "SAME." In the chaos of this week, with the confirmation of Brett Kavanaugh to the Supreme Court (a let-down to survivors everywhere), it was hard to feel heard and seen. Anyone who has been following the sexual assault allegations against Kavanaugh by Dr. Christine Blasey Ford, Deborah Ramirez, and Julie Swetnick knows that this has been a trying and triggering time, rife with disappointment and sadness.

Kavanaugh's swearing-in ceremony was a particularly torturous moment; not only was this really happening, but the smiling faces in the audience remind us of how trivial a woman’s word and safety is in the United States.

Amidst the collective cognitive dissonance many experienced watching this event unfold, there was one face in the crowd who seemed to capture a very shared feeling. Ruth Bader Ginsburg, an Associate Justice on the Supreme Court, caught our attention and won our hearts giving serious looks during the confirmation, sparking a frenzy of sympathetic memes.

While Ginsburg couldn’t express herself verbally due to professionalism, she sure as hell let us know how she felt by serving face. With her body language drawn inwards, her shoulders hunched, and her expression grimaced in almost resigned disapproval, it’s practically a challenge to look at her without thinking, “I feel you honey.” 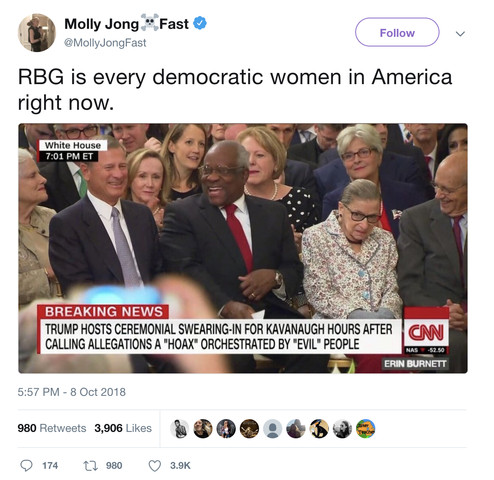 Ginsburg is known for being liberal, and as a strong woman with a long history in politics, it’s not too difficult to imagine what’s going through her head.

When the President is stacked with multiple sexual assault accusations  and a history of attacking marginal communities and women, the fact that Kavanaugh’s career continued on untarnished is more of a shell shock than a surprise. That said, it still elicits intense feelings of anger, powerlessness, fear, frustration, and the urge to kinda throw-up in our mouth. Thankfully, Gainsburg captured this collective nausea and allowed us to feel seen, if for one moment, in these scary times. 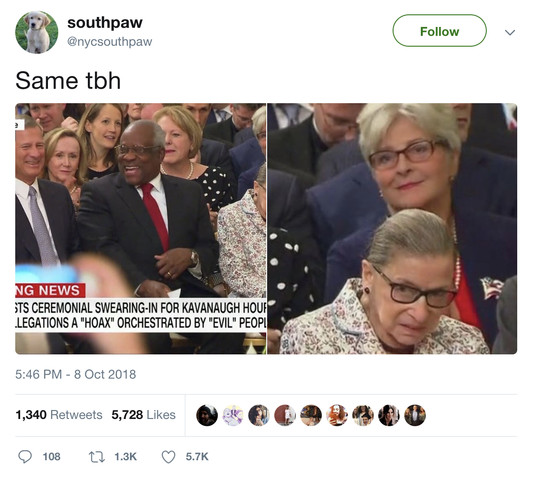 Tags: Ruth Bader Ginsburg , Brett Kavanaugh , Donald Trump , Politics , Memes , Ruth Bader Ginsburg
Support Feminist Media!
During these troubling political times, independent feminist media is more vital than ever. If our bold, uncensored reporting on women’s issues is important to you, please consider making a donation of $5, $25, $50, or whatever you can afford, to protect and sustain BUST.com.
Thanks so much—we can’t spell BUST without U.