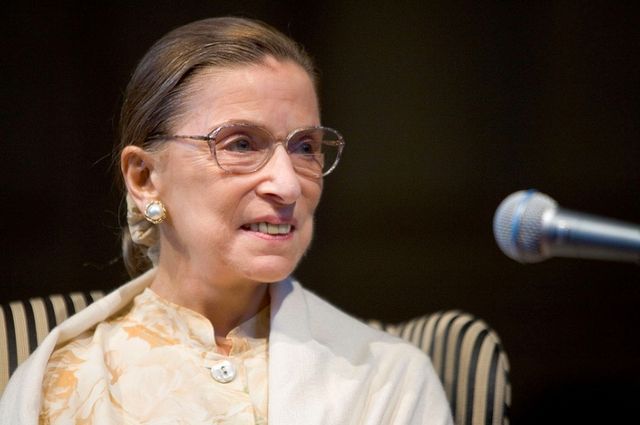 Just one day after swearing in accused sexual abuser Brett Kavanaugh, the Supreme Court is back at it with a harmful order—and Justices Ruth Bader Ginsburg and Elena Kagan have something to say about it in a powerful dissent.

Unlike many other states, North Dakota does not have any form of voter registration. Instead, there’s currently a lower-court order that mandates all voters in North Dakota arrive at the polls with certain specific forms of ID, including proof of residence. This order blocks around 20% of the state’s voters from casting their ballots in November, Ginsburg noted in her dissent, and disproportionately impacts the state’s large Native population, since many Native Americans living in North Dakota have different forms of identification without street addresses.

In the words of the Native Americans Rights Fund, “the U.S. postal service does not provide residential delivery in these rural Indian communities. Thus, most tribal members use a PO Box. If a tribal ID has an address, it is typically a PO Box address, which does not satisfy North Dakota’s restrictive voter ID law.”

This is a problem that could have lasting effects for North Dakota and for America: as Mother Jones reported, Senator Heidi Heitkamp is “considered the most vulnerable Democrat in the Senate,” and won her seat by a margin of under 3,000 votes six years ago. Heitkamp has been consistently critical of these voter ID laws for awhile: in an interview last May with The West Fargo Pioneer, she called the legislation “unnecessary” and argued that the order was meant to “clearly target” the Native American population of North Dakota.

Republicans supporting the order claim that it helps fight voter fraud—but as Mother Jones wote, in-person fraud is very rare, and as Heitkamp told the Pioneer, there’s no evidence that voter fraud of any kind is a problem in North Dakota. In a 2006 letter, as shared by the NARF, North Dakota Secretary of State Alvin Jaeger explicitly wrote that “during my fourteen years as…the state’s chief election officer, my office has not referred any cases of voter fraud to the United States Attorney, the North Dakota Attorney General, or to local prosecutors. We haven’t had any to refer.”

In her dissent, Ginsburg wrote:

“The Eighth Circuit observed that voters have a month to ‘adapt’ to the new regime. But that observation overlooks specific factfindings by the District Court: (1) 70,000 North Dakota residents—almost 20% of the turnout in a regular quadrenial election—lack a qualifying ID; and (2) approximately 18,000 North Dakota residents also lack supplemental documentation sufficient to permit them to vote without a qualifying ID.”

If you live in North Dakota—or anywhere in the U.S.—you can find everything you need to know about your local voting laws and registration deadlines on Vote.org.

Tags: Ruth Bader Ginsburg , Supreme Court , Supreme Court , Ruth Bader Ginsburg , disenfranchisement , elections
Support Feminist Media!
During these troubling political times, independent feminist media is more vital than ever. If our bold, uncensored reporting on women’s issues is important to you, please consider making a donation of $5, $25, $50, or whatever you can afford, to protect and sustain BUST.com.
Thanks so much—we can’t spell BUST without U.