I See You, Old White Men 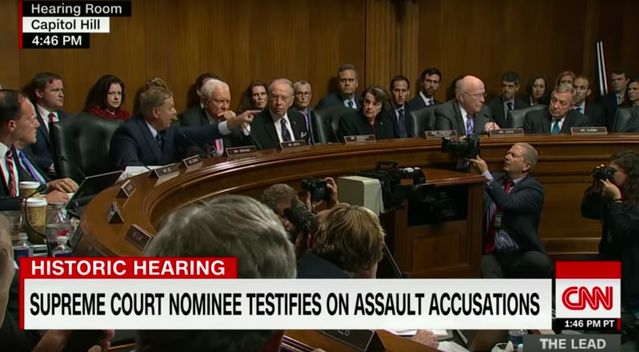 On the day of the vote, what will those conservative old white men think, as they pour themselves coffee, sit with their wives and thumb through the news?

We did our duty.

We heard her out.

We listened to him.

We stand ready to judge.

Alongside countless other women, yet utterly alone, I watch the Kavanaugh hearings unfold. My inner teen trembles with decades-old shame. I am Dr. Blasey Ford. Date-raped at 15. (Unreported. I was in another country. I was a virgin. I was a kid. My mother told me not to worry. You can still have a first time. This didn’t count.). Date-raped at 18. (Unreported. It was college in the '80s; my father said a court wouldn’t sympathize. Did you have something to drink? How short was your skirt?)

What were those old white men thinking, as they drove to the Senate to cast their votes?

It was so long ago. We can’t really be sure.

"Beyond a reasonable doubt" should apply to the court of public opinion.

Boys will be boys.

He won’t do it again.

Who hasn’t made a mistake in his past? (“But I would like the gentleman to be on notice that that is his one pass. It’s not really a pass, but given the conduct, one might consider that it is,” said Assistant District Attorney Andrew Grannik last month, of a "gentleman" who strangled and masturbated on a woman he’d just met.)

Watching the news coverage is as difficult as deliberately avoiding it. I can’t eat. I can’t sleep. They are judging her. They are judging me. The American Bar Association says slow down. (I pleaded, stop.) The Jesuit Order says, “This is not the right guy.” (For me, it was too late.) The President says, “Just started, tonight, our 7th FBI investigation of Judge Brett Kavanaugh. He will someday be recognized as a truly great Justice of The United States Supreme Court!” (I burned with shame, fearing no one would believe me.)

This is a partisan outrage.

We must get a conservative bench before the next Supreme Court session.

The Democrats blew this process up on purpose.

They tied their ties, they drove to the Senate. They traded whisper strategies in hallways. Their assistants reported on the overnight calls: “There’s a lot of anger out there. But we think our base wants you to vote him in.”

They dropped any pretense that the nomination process is about what’s best for the country. “What you want to do is destroy this guy's life, hold this seat open, and hope you win in 2020,” roars Senator Graham.

Watching these hearings, reading his and others’ words make me sick to my stomach, cast me back decades, to a chasm of guilt and confusion. To a time that I wasn’t yet an adult. To a time that those who heard me, judged.

Survivors confront Senator Flake, demanding that they see him.

Look at me when I’m talking to you.

He meets their eyes, then looks away.

One week. We’ll hold our noses while you hold your breath, for one week.

A WEEK IS NOT ENOUGH. THE SHAME OF WHAT HAPPENED IS NOT MINE TO BEAR. It’s not hers to bear. Or the country’s.

I am sick of the guilt. Sick of being sick when I read the word “rape.” I’ve been to therapy. I’ve found support. I’ve found my voice.

So here’s my message to you, old white men:

He’s been upstanding, since then.

“What you want to do is destroy this guy's life, hold this seat open, and hope you win in 2020,” bellows Senator Graham.

“Sixty-five people who knew Brett Kavanaugh during high school stated they never saw any behavior like what has been described,” intones Sen. James Lankford.

What he doesn’t say: “So how bad could it have been?”

You had your week. The FBI did their best. We know all we need to know.

Oh, I get it. We get it. Your judgment. Your votes. You really don’t hear us. Or you do, but you don’t care.

We hear you. And we care. We care enough to outweigh your callousness.

So cast your votes this week, old men. We’re ready to cast ours, too.

Amy L. Freeman divides her time between her role as Development Director for The Writer’s Center in Bethesda, Maryland, and freelance writing. Bylines range from The Washington Post to GoodHousekeeping.com and are collected here: http://amylfreeman.com/. Follow her on Twitter @FreemanAmyL.