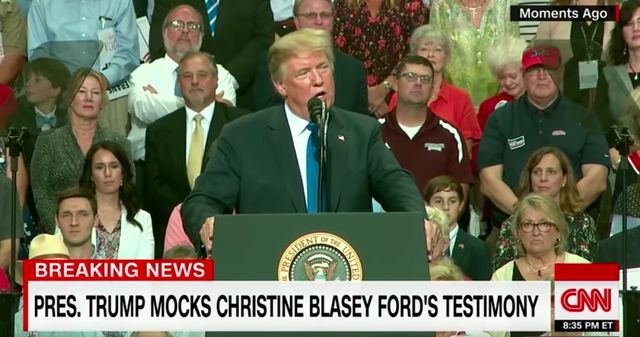 This week, the tension surrounding Supreme Court nominee Brett Kavanaugh and the accusations of sexual assault against him by Professor Christine Blasey Ford continues to climb.

On Tuesday, President Donald Trump attended a campaign rally in Mississippi, where he proceeded to publically mock Ford’s account of the sexual assault. In a CNN video of the rally, Trump is seen denouncing the validity of her claims with a malicious impersonation of her trial speech:

He continues his attack on her legitimacy while mocking her for testifying, “I only had one beer.”

Trump supporters in the crowd can be seen cheering in agreement, encouraging his words as he goes on to say, "A man’s life is in tatters, a man’s life was shattered.”

While it’s shocking to hear this type of public dismissal coming from the President of the United States, his perspective unfortunately isn't unique. In a BBC video from the rally, one woman says, “Young men in particular, I have a son, I don’t think that they are going to be able to seek justice if that sort of thing happens. I know young boys will be falsely accused of things.” But this hyper-focus on men’s lives being “shattered,” or the idea of them having to live in a culture of fear, is in direct contrast with the facts.

The National Sexual Violence Research Center (NSVRC) reports that 1 in 5 women and 1 in 71 men will be raped in their lifetime, and 1 in 3 women will experience some form of contact sexual violence. Furthermore, rape is the most under-reported crime, with 63% of victims never reporting to the police. False reports concerning sexual assault cases are calculated to be between 2-10%, and this doesn’t take into account the likelihood that many of these "false" cases could have easily been true, but were simply not supported by enough hard evidence or witness for the case to succeed.

It is crystal clear that coming out publicly with an experience of sexual assault is no easy feat. Ford’s safety, along with that of her family, has been compromised, with death threats, harassment, and malicious intent, now furthered by a speech from the President. Additionally, Trump’s antagonistic approach to Ford’s lack of clarity surrounding specific accounts of the assault fails to consider the mind-altering effects that trauma and PTSD can have on someone’s memory.

The reality is that we live in a culture where a woman’s word is always ridiculed. Where, despite staggering evidence proving a culture of sexual violence, women are doubted and defamed, and rarely supported. A culture where women experience fear on the daily for their safety, and then their credibility is ruthlessly challenged when they try to speak out. A culture that doesn’t want them to win, and was never set up for them to win. It’s imperative that we examine not just this one incident, but the greater implications surrounding the culture of fear that women experience.

The Kavanaugh case illustrates both the power and futility of speaking a truth. While Ford inspires many women who have experienced sexual violence, she also represents how torn down a woman can be for choosing to come forward. Despite the efforts of those who use low attempts to bring a strong woman down, Christine Blasey Ford has an equally powerful and ruthless web of people who stand behind her and are ready to see this broken system changed for good.

Donald Trump Jr. Says The Kavanaugh Hearings Make Him Scared For His Sons, Which Makes Us Scared For How He’s Raising Them