Donald Trump Jr. Says The Kavanaugh Hearings Make Him Scared For His Sons, Which Makes Us Scared For How He’s Raising Them 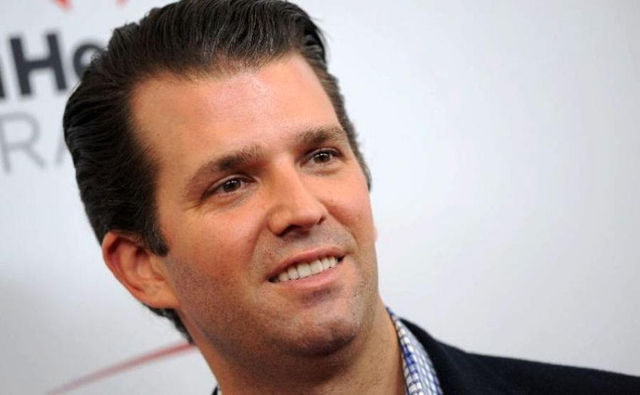 Donald Trump Jr. spoke to DailyMailTV about Brett Kavanaugh’s confirmation hearings, saying that the current climate of #MeToo makes him nervous for his sons, The Cut reports.

In a joint interview with his girlfriend, Kimberly Guilfoyle, during a campaign swing for GOP Senate candidate Matt Rosendale, Trump Jr. said, “I’ve got boys and I’ve got girls. When I see what’s going on right now, it’s scary for all things.” When asked whether he was more scared for his sons or daughters, the president’s ‘First Boy’ retorted, “Right now, I’d say my sons.”

His mansplaining didn’t cease there as he continued, “For the people who are real victims of these things, when it is so obviously political in cases like this, it really diminishes the real claims.” In reality, research has shown that false reporting accounts for just between 2 and 10 percent of sexual assault allegations. Guilfoyle went on to add, “I think it’s important, in terms of doing an investigation, to get the facts out there and find out. But, people need to be careful to understand the politics involved as well and what motivations people may have.”

Motivations? Like Dr. Blasey’s motivation to offer testimony, at the risk of her personal livelihood, to help government leaders decide whether to grant an alleged sexual predator a lifetime position to the highest court in the nation? Guilfoyle's questioning of people's "motivations" reads as a passive agressive attempt to discredit Dr. Blasey and trauma victims as a whole.

Trump and Guilfoyle’s shoddy justifications, in their sympathy for those accused, are not surprising considering over 20 women have accused the president of sexual assault. Additionally, Guilfoyle left her hosting job at Fox News over allegations of sexual misconduct in which she was reportedly “showing personal photographs of male genitalia to colleagues (and identifying whose genitals they were).”

If Donald Trump Jr. is so concerned for his son's futures amid the #MeToo era, he should consider taking the time to teach them about appropriate behavior and boundaries towards women. It's really not that hard, Don.

Kavanaugh's Nomination Moves Forward After Dr. Christine Blasey Ford's Testimony—But There May Be A Delay

Tags: Donald Trump , Donald Trump Jr , Brett Kavanaugh , Politics , Christine Blasey Ford , Vote , Women's Rights , president , feminist , Donald Trump , Supreme Court , feminism,
Support Feminist Media!
During these troubling political times, independent feminist media is more vital than ever. If our bold, uncensored reporting on women’s issues is important to you, please consider making a donation of $5, $25, $50, or whatever you can afford, to protect and sustain BUST.com.
Thanks so much—we can’t spell BUST without U.