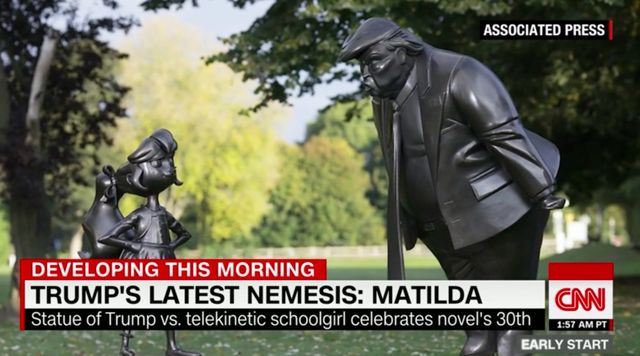 This week, we saw new life breathed into the beloved character, Matilda, to commemorate the 30th anniversary of Roald Dahl’s classic and celebrated novel by the same name. Matilda was resurrected on the author's estate in Great Missenden, Buckinghamshire as a playful statue in what TIME magazine suggests is a "temporary installation." Standing on a stack of books with hands on hips in a gesture of sassy defiance, she captures everything we remember the character to be: intelligent, fiercely independent, and always holding her own. Only this time, we experience Matilda with an unexpected and comedic narrative twist.

Standing next to Matilda’s statue is a cartoonish rendition of Donald Trump, glaring down at her in anger and disapproval. The Roald Dahl Story Company, which manages the author's estate, explained that this was actually a decision made by fans, reports CNN. When asked who would be Matilda’s adversary in 2018, the vote leaned heavily towards Donald Trump at 42 percent. Other contenders were Piers Morgan and Prime Minister Theresa May.

The statues open up a dialogue about the importance of strong female protagonists. In the novel, the villain Miss Trunchbull instills fear and feelings of powerlessness into the children. Some unforgettable moments at the hands of Miss Trunchbull include her force-feeding a child chocolate cake until he’s sick and locking another in a tiny cabinet with nails protruding from the walls. Terrifying? Almost as scary as Donald Trump.

In a current political climate that attacks women’s rights, bodies, and narratives, Matilda represents the value of standing up against abuse of power. Her use of telekinesis combined with her fervor to speak up for what is right gifted us with a timeless heroine.

In The Independent article "Roald Dahl’s Matilda at 30: A Heroine Who Changed Lives," Daisy Buchanan writes:

Female rage has always been a taboo. Like many women, I grew up being told that anger was an inappropriate emotion for little girls, and I was forbidden from expressing it. Yet Matilda’s rage gives her extra strings, and it becomes an extra source of fuel that… allows her to seek revenge and justice.

Thanks to this reminder of Matilda’s iconic vigor and defiant rage, we can be re-inspired to be our own heros and heroines in the fight for justice.

Women In Power Do Things Differently