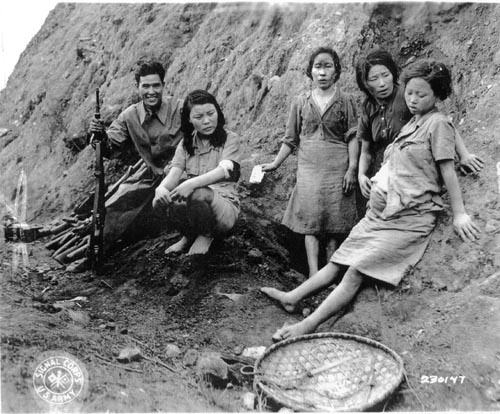 During the Second World War, tens of thousands of women were taken from their homes and turned into sex slaves for (predominantly) the Japanese army. Most of these women never made it home after the war, and those that did were faced with a lifetime of shame, guilt, and secrecy. Less than 35 of these women are currently alive. Yet, in recent years, their story and their unending fight for an apology has sparked an international crisis.

So who were the Comfort Women? What happened to them? And why is it only now, decades later, that they are close to getting justice?

This article contains graphic language regarding sexual abuse and rape. 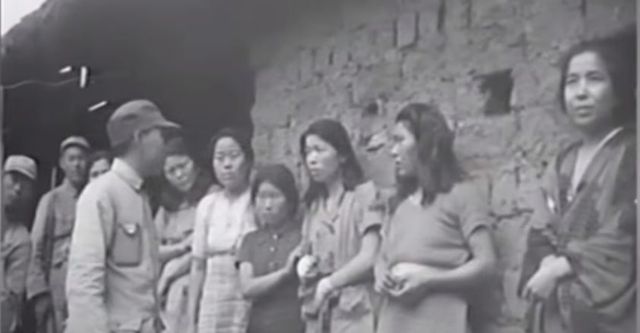 The Comfort Women program was assembled by the Japanese military during the WWII. The main purpose for its inception was to ensure that troops averted venereal disease and any instances of rape, abuse, and assault of local women. The military set up what were known as "Comfort Stations." The first station opened in occupied China around 1931. This location was staffed by Japanese sex workers who volunteered to take part in the scheme.

However, as the Japanese military progressed and expanded their territory, the volunteers couldn’t meet the demand. As a result, the army looked to new territories to fill the gap and recruited women from across Asia, in addition to some from the Netherlands and Australia. The vast majority of the women brought in to work at the stations were from Korea. These women became known as Comfort Women.

The exact number of women who became Comfort Women is under dispute, with historians and activists estimating figures from 20,000 to over 200,000. What we do know are the many ways in which women and girls became Comfort Women. A small minority joined voluntarily. Some were tricked into thinking they would be cooks or maids, only to be forced to become Comfort Women. Some were sold into the lifestyle, and others were kidnapped. 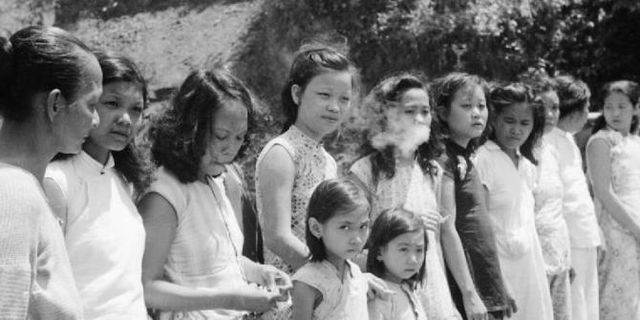 A line of Comfort Women

In 2010, Dutch journalists Jan Banning and Hilde Janssen, interviewed former Comfort Women about their experiences. One woman, Niyem, spoke about how she was kidnapped at 10 from her home in Yogyakarta, Indonesia, and forced onto a West Java-bound truck with other kidnapped women. In Java, the abducted women were forced into becoming Comfort Women. Niyem was barely fed, and she slept in a tent with two other young girls. Soldiers would visit the tent and Niyem had to witness her friends getting raped, before it was her turn. Niyem explained, "I was still so young, within two months my body was completely destroyed… I was nothing but a toy, as a human being I meant nothing, that’s how it felt during the Japanese era.”

This was not an isolated incident. In 2015, Yong Soo Lee—now in her 80s—spoke to The Washington Post about her time as a Comfort Woman, after she was kidnapped at 14 from her home in Korea: "At first the other girls tried to protect me because I was so young. I saw the soldiers on them, but the girls put a blanket over me and told me to pretend I was dead so nothing would happen to me. I didn’t know what they meant. I was only 14. I didn’t know anything then.”

Niyem and Young Soo Lee lived to tell their harrowing stories, but the vast majority of Comfort Women didn’t make it home after the war. A small minority managed to integrate themselves within the local community. But the stories of most women remain unknown. Many are thought to have died at the Comfort Stations.

Comfort Women with a soldier
Those that did return home were met with silence. Their traumas were not acknowledged. There was no attonement, no help, no official apology. Many of the women were rejected from the lives that had previously been stolen from them. With their families and husbands disgusted by them, it became impossible to move forward from what they had experienced.

Even women with supportive families faced overwhelming challenges. STDs were rampant at the Comfort Stations, causing infertility. Some women were sterilized. Others were beaten so badly they could no longer have children. Lacking the help and understanding for what they’d been through, many women struggled to heal from the trauma and build new lives for themselves. Coping as best as they could, they lived in isolation with their anguish. 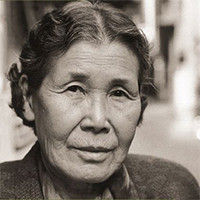 Meet Kim Hak Sun, one hell of a brave woman

In 1991, Kim Hak Sun became the first Korean Comfort Woman to speak out about what had happened to her. Kim Hak Sun was 17 when she became a Comfort Woman. She was 67 when she got to tell her story. 50 years after her ordeal began, she held a press conference, explaining, "Until now, I did not have the courage to speak, even though there are so many things I want to say."

Kim Hak Sun filed a lawsuit against the Japanese government, looking for recognition regarding what had happened to her and thousands of others: "Why do they lie that we don’t exist even though I am right here? This should now be straightened out." In 1997, Kim Hak Sun died, having never received her apology. But her bravery inspired other Comfort Women to demand that their voices finally be heard. More and more Comfort Women from all over the world started speaking up and fighting for their long-overdue rights.

By the mid-1990s, the Korean government was working to chronicle the experiences of Comfort Women. School textbooks now clearly outlined what had happened, and funds were opened so the women could seek financial aid. Then, in 1995, Japan's Prime Minister, Tomiichi Murayama, set up a private trust for the women—but they refused the money. They believed the gorvernment was morally responsible for the atrocities that occured. Thus, they would not accept private donations. 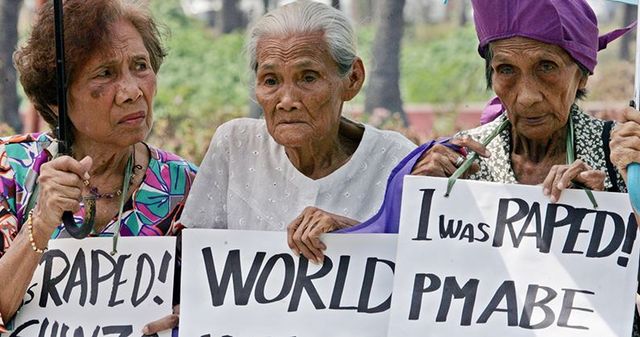 Former Comfort Women during a protest

In 2015, after 20 years, Japan and Korea reached an agreement. The Japanese government would set up a fund for Korea’s Comfort Women, worth 1 billion yen (approx $8.3 million at the time). The agreement declared that the issue was "resolved, finally and irreversibly." However, in 2017, Korea’s new President, Moon Jae-in, questioned the deal’s validity. Then, in 2018, he argued that the current deal did not include a sincere apology, thus failing to uphold the dignity of the Comfort Women.

What happens next in the reparations saga remains up for debate, and that’s only half of the story. The other crucial factor is: How do we keep make sure this history is remembered? The number of surviving Comfort Women is dropping rapidly, with just a few dozen remaining. These women are spending their golden years reliving the worst moments of their lives, and begging history to recognize them.

With so many firsthand accounts, in addition to pictures and video, you’d think that historians would take these women seriously. You’d be wrong… 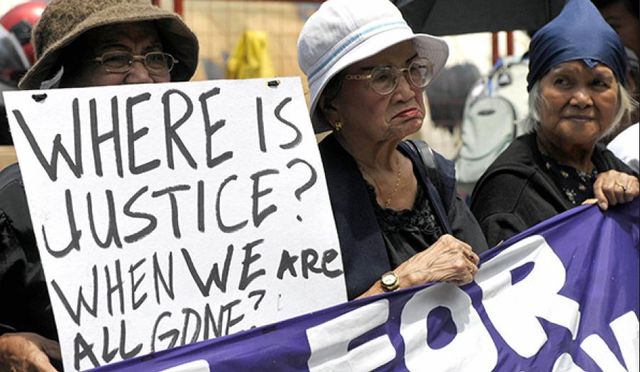 An application was made for the Comfort Women’s story to be included in UNESCO’s (The United Nations Educational, Scientific and Cultural Organization) Memory of the World, a register designed to safeguard crucial chapters in history. However, in 2017, UNESCO postponed any decision regarding the inclusion of the Comfort Women in the Memory of the World program. This decision confirmed everything the women were fighting against. It certified that what had happened to them had no significance and could be forgotten.

The surviving Comfort Women are now in their 80s and 90s, making it unlikely they'll receive the recognition, reparations, and apologies they've sought throughout their lifetimes. But, like Kim Hak Sun, their fight will leave an indeliable mark. These women are not only fighting for themselves, but for the tens of thousands of women who were also stripped of their names, dignity and lives. They are fighting for their right to be remembered. And that is a fight we can all help with.

Where can I find out more? I would suggest checking out Jan Banning and Hilde Janssens' book, Comfort Women / Troostmeisjes. It's sold out on most online retailers, but you might have luck visiting your local library or second-hand book shop. I’d also suggest watching the 2016 documentary, The Apology, which follows three former Comfort Women as they recall what they've experienced and fight for change.