Kavanaugh's Nomination Moves Forward After Dr. Christine Blasey Ford's Testimony—But There May Be A Delay 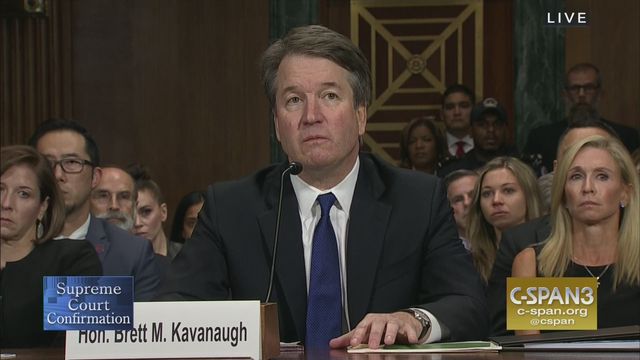 On Thursday, September 27th, Dr. Christine Blasey Ford, with bravery and conviction, testified in front of the Senate that Brett Kavanaugh sexually assaulted her when they were in high school, CNN reports. In front of a committee consisting mostly of male lawmakers, Dr. Blasey articulately recalled painful details of the assault. She cooperated and expressed a desire to be helpful to the committee in her recollection of events. As a nation, we watched her relive her trauma as she answered questions that seemed grounded in doubt and cross-examination.

Dr. Blasey testified to remembering specifics of the evening from how she got home to the bedroom where Kavanaugh and other young men attempted to rape her. She stressed, “Indelible in the hippocampus is the laughter… the uproarious laughter” of the men who held her down and covered her mouth as she tried to scream. Her voice shook as she openly admitted to being terrified but maintained that sharing her experience was her “civic duty.”

After Dr. Blasey’s testimony, Kavanaugh gave a belligerent and rage-fueled defense, blaming Democrats for what he called “a calculated and orchestrated political hit” intended to deny him a seat on the Supreme Court. He refused to support an FBI investigation of the allegations and even asserted that any resistance to his confirmation “amounted to revenge on behalf of the Clintons,” NPR reports.

Following an exhausting day of questions and speculations, the American Bar Association issued a statement requesting the Senate Judiciary Committee hold off on Kavanaugh’s nomination until an FBI investigation is conducted. Previously, the ABA gave him their highest rating of “well-qualified.” Robert Carlson, the ABA’s president, wrote, “Each appointment to our nation’s Highest Court (as will all others) is simply too important to rush to a vote. Deciding to proceed without conducting additional investigation would not only have a lasting impact on the Senate’s reputation, but it will also negatively affect the great trust necessary for the American people to have in the Supreme Court.”

On Friday afternoon, the Judiciary Committee voted to approve Kavanaugh's nomination, which now moves to a full floor vote. However, Senator Jeff Flake voted to approve the nomination "on the grounds that he would get support to request a floor vote delay and a one week FBI investigation," reports CNN. However, Senate Majority Leader Mitch McConnell has not committed to the FBI investigation and may move forward without it; but if he does move the nomination forward without an FBI investigation, Flake has said he will vote against Kavanaugh for the final confirmation vote. Senators Lisa Murkowski and Susan Collins have not yet announced how they will vote.

Flake's reversal happened hours after two sexual assault survivors, Ana Maria Archila and Maria Gallagher, confronted him in an elevator on Friday morning after he gave a statement saying he would vote to approve Kavanaugh's nomination, reports the New York Times.

“I was sexually assaulted and nobody believed me,” Maria Gallagher told Flake. “I didn’t tell anyone, and you’re telling all women that they don’t matter. [...] Don’t look away from me. Look at me and tell me that it doesn’t matter what happened to me, that you will let people like that go into the highest court of the land and tell everyone what they can do to their bodies.”

Tags: Politics , Women's Rights , Brett Kavanaugh , Dr. Blasey Ford , White House , Supreme Court , Senate , Vote , feminist , Donald Trump , Woman , feminism,
Support Feminist Media!
During these troubling political times, independent feminist media is more vital than ever. If our bold, uncensored reporting on women’s issues is important to you, please consider making a donation of $5, $25, $50, or whatever you can afford, to protect and sustain BUST.com.
Thanks so much—we can’t spell BUST without U.