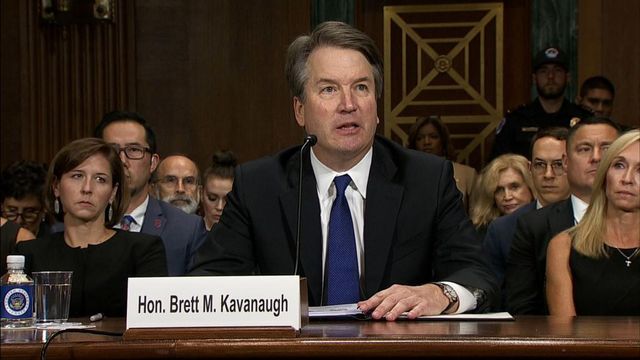 As I type this, I am sure that Brett Kavanaugh will be appointed by Congress to be the next Supreme Court Justice. The nation watched yesterday as one of his victims came forward against her wishes to tell the world of his crimes, and as he came forward to reveal his dedication to untruths and preservation of reputation above all else.

His lies were blatantly obvious, but Republicans will vote him through anyway. Why? Because they are unashamed and proud.

Weeks ago, a research team at the University of Montreal and UC Santa Barbara’s Center for Evolutionary Psychology (CEP) released a study suggesting that shame was built into human nature by evolution because it served an important function for our foraging ancestors. They show that shame is present in every human culture, meaning it is part of human nature and was “engineered to deter harmful choices and make the best of a bad situation.” Shame keeps a group alive by prioritizing the safety and needs of everyone. It sustains us.

This brings me to the Kavanaugh case. Where is his shame? Even in his best-case scenario (read: his most believable best-case scenario), that he has no memory of his abhorrent actions because he was too intoxicated, he is being dishonest by repeatedly denying that this could be possible.

I watched his testimony and saw his shame on full display. The yelling, the hurling questions back at Senators, the crocodile tears. He knows what he has done and he is ashamed, or he is at least afraid. But instead of giving into that shame in any way, instead of acknowledging the possibility of his missteps or the error of his young ways, he is letting shame power his denial.

He is able to do this because he is being told publicly and privately that there is nothing shameful about what he has done. The assaults, the cover ups, all of it is being deemed acceptable. He not only lied without consequence, he lied with encouragement from those in power. They know his (and many of their own) actions are shameful, but they continue to hide them and instead weaponize shame towards their opponents and marginalized people.

He was lying, and the Republicans support his lies. Not because they think what he did was wrong and he needs to hide it. Because they think his actions are acceptable and they need to obscure the truth from the public in order to move forward with their agenda. They privately are not ashamed of his actions. They don’t find his actions to be disqualifying. How could they? To them, this behavior is normal. This is the behavior of the powerful.

Our cultural shame has been misplaced. Masculinity is not immune to shame; it is rife with it, but the shame is tied to the vulnerable, the gentle. These qualities are stifled and reviled in the cult of masculinity that instead finds ways to glorify power by force. This brutal core of masculinity is shameful, and we as a society have an obligation to assert this.

I believe Dr. Christine Blasey Ford. I believe Deborah Ramirez and Julie Swetnick, too. My belief goes beyond the powerful testimony we witnessed yesterday. It goes beyond the highly rare and unique nature of false sexual assault accusations. It goes beyond the ways that these women have demonstrated their credibility as sources and their willingness to subject themselves to public scrutiny with nothing to gain for themselves.

My belief comes from knowing that those who do the most shameful things in our society are often the most protected and powerful. My belief come from what philosopher Miranda Fricker calls "testimonial injustice," meaning a person’s testimony will be granted less credibility based on the stereotypes about the groups they belong to and the power they hold. It comes from Kavanaugh, who himself has publicly acknowledged that “what happens at Georgetown Prep, stays at Georgetown Prep.”

It is not only the Republicans who have told Brett Kavanaugh he has nothing to be ashamed of. It is the country.  Writer Thomas Miller’s words have been cited by feminists including Jessica Valenti during these recent weeks: “It takes one rapist to commit a rape, but it takes a village to create an environment where it happens over and over.”

We need a shame revolution. We need, as writer Ben Wexler tweeted, for teenagers (and adults) to know that their actions now will follow them for a lifetime and they will face social and legal consequences. We need to take shame back from those in power and show them what will make us survive as a whole, not as an elite few.

Shame is making a comeback, and predators better watch their backs.

Eliana Stanislawski is a writer covering social justice, politics, and everything else they can. Follow them on Twitter @eliana_stinky.