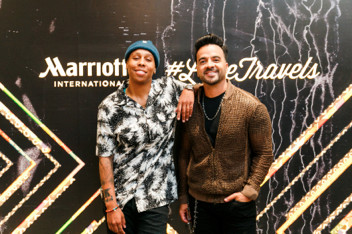 Tuesday night, the Marriott hosted their inaugural #LoveTravel Beyond Barriers event - a night to celebrate “Human Rights, Equality, Inclusivity and Peace”. $50,000 grants were given out to four young, “change makers”:

Nadya Okamoto, Founder of PERIOD, a “menstrual movement” to both provide products worldwide and change the conversation (or lack thereof) around period.

Jordan Reeves, Founder of VideoOut, a collection of “coming out” stories to empower the LGBQT community.

The Marriott ballroom, awash with blue and purple lights, was packed with a seemingly like-minded crowd: finely-dressed youths profoundly hungry for progress. Many also came out to see the program’s keynote speakers: actor/writer Lena Waithe and singer/activist Luis Fonsi.

Earlier in the night, BUST sat down with Waithe, Fonsi, and the grantees. In the quiet of an upstairs conference room, Waithe spoke of visibility.

“I came into this all not thinking I would be a public person,” she said. Waithe is, of course, very much in the public now. As Denise on Netflix's Master of None, her character is a television anomaly: a queer, black, masculine-presenting woman. As a television writer, her characters subvert the tragic queer tropes common to media. Power, she said, is in the portrayal.

“When I make stories about queer characters it’s a little close to my heart because it’s something I understand,” Waithe said. “When I told my own coming out story on Master of None, having the children in the shot have a mother that’s with a woman, not having it be on a soapbox, just have it be a part of the fabric of the world.”

She’s staying busy too; her upcoming projects include the Chicago-based drama, The Chi and Twenties. Twenties follows four, yes, twenty-somethings as they navigate the complications and mundanity of the age. What makes it special? The cast is black; the protagonist is a queer, masculine women played by Jonica T. Gibbs. The actress is very similar in vibes, Waithie says, to herself. The pilot for Twenties was written years ago, only to have the misfortune of arriving on the studio desk at the same time as Lena Dunham’s pilot, Girls.

But “change” was an apt theme for the night, and the cultural attitude regarding whose narrative deserves an audience has shifted.  “The microphone,” Waithe said, “is more powerful than a grenade.”

It’s a sentiment followed closely by Luis Fonsi, the Puerto Rican singer who became a sensation in the English-speaking world (despite a successful 20-year career in Latin America) after the hit “Despacito”.

Like Waithe, he’d once been an odd one out. A ten-year-old islander suddenly transplanted to Orlando, Florida.

“I tell people I'm from Puerto Rico but I was raised in Orlando,” he said. “It brings back so many memories of that ten-year-old moving from Puerto Rico to Orlando with a very thick accent, put in the back portables in the ESL program. Being bullied.”

It’s safe to assume no one is bullying the chart-topping artist now, but in an era of spiking anti-Hispanic sentiment, his success – the first US No.1 since the “Macarena” – is seismic. Is it indicative of a change in the perception, and acceptance, of Latin-born singers in the American music community? Fonsi thinks so.

“For the first time, English singers are calling Spanish singers – not the other way around.” His excitement was infectious. At the main program later that night, I thought of the world Waithe and Fonsi were working towards: one where queer, brown protagonists are the norm, not the exception. Where Latin American music – beautiful, eclectic, vibrant – is considered the equal of America’s Billboard 100.

The grantees – with their varied causes. of menstrual movements, a rebuilt island, and queer acceptance – leave with $50,000 to expand upon their visions.

Though as the program closed, and the open bar beckoned, Waithe’s final remarks reminded of the present: We have work to do, she said. America has some ugliness to look at first before we get somewhere new.