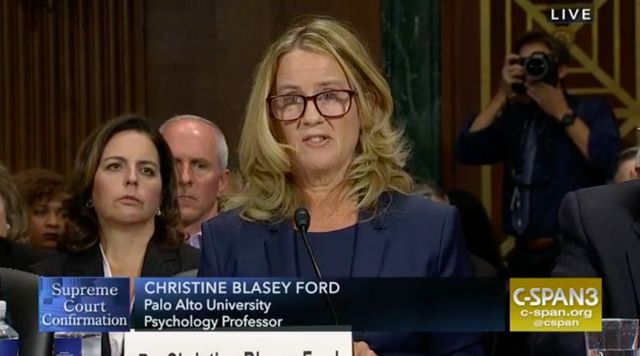 Dr. Christine Blasey Ford is testifying today about her experience of being sexually assaulted by Supreme Court nominee Brett Kavanaugh while they were both in high school (which Kavanaugh denies). She has delivered her opening statement with details of the assault, in which Kavanaugh, with the help of Mark Judge, trapped her in a bedroom and covered her mouth during the attack. Ford describes how the traumatic experience drastically affected her life, the responsibility she felt to notify the Senate and President before the nomination, how she struggled with the decision to come forward with her name and expose herself and her family to the world’s scrutiny, and the aftermath of her decision to come forward.

“Apart from the assault itself, these last couple of weeks have been the hardest of my life. I have had to relive my trauma in front of the entire world, and have seen my life picked apart by people on television, in the media, and in this body who have never met me or spoken with me. I have been accused of acting out of partisan political motives,” Ford says in the final paragraphs of her statement. “Those who say that do not know me. I am a fiercely independent person and I am no one's pawn. My motivation in coming forward was to provide the facts about how Mr. Kavanaugh's actions have damaged my life, so that you can take that into serious consideration as you make your decision about how to proceed.”

We recognize your incredible bravery and support you in this trying time, Dr. Ford. Today is a great day to remind survivors of assault and trauma that you stand in solidarity with them.

You can stream the live hearing here.