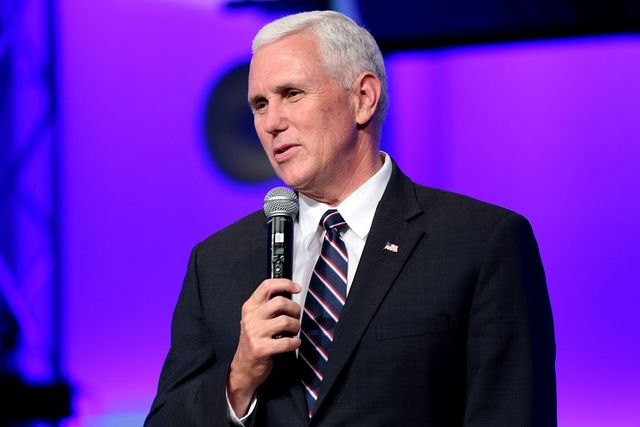 According to the Values Voter Summit’s website, the event hopes to “preserve the bedrock values of traditional marriage [and] religious liberty.” The website also boasts that in 2016, Pence called the Summit “the greatest gathering of conservative pro-family Americans in the nation.”

At the event, Newsweek reported that Pence said, “While Republicans have been delivering on a common-sense conservative agenda since 2016, Democrats have fallen further to the left than ever before. Today’s Democratic Party thinks Obamacare didn’t go far enough, and they’re now running actual socialists for higher office. Today’s Democratic Party wants abortion on demand, and they want you to pay for it.”

This year’s Summit also featured speakers including Ben Carson, Mitch McConnell, and Jack Phillips, the Colorado baker who was famously allowed to deny wedding cakes for same-sex weddings last June. Pence spoke after a panel called “How Gender Ideology Harms Children,” which was run by the American College of Pediatricians, another SPLC-identified hate group that harms transgender children. Trump became the first president to speak at the Summit last year.

The Family Research Council, the organization behind the Summit, has fought against anti-bullying and anti-harrassment laws and promoted initiatives to prevent LGBT-identifying people from joining the military. In a fundraising email, spokesperson Tony Perkins wrote, “The videos titled ‘It Gets Better’…are aimed at persuading kids that although they’ll face struggles and perhaps bullying for ‘coming out’ as homosexual (or transgendered or some other perversion), life will get better…it’s disgusting. And it’s part of a concerted effort to persuade kids that homosexuality is okay,” according to the SPLC. The Council also spreads a lot of misinformation about transgender identity and likens gay people to pedophiles, according to NBC News.

But then again, why would we expect anything else from a VP who once suggested moving funding from HIV prevention to conversion therapy centers?

God Does Not Belong To The Republican Party