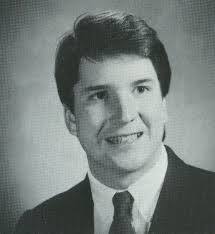 More disgusting accounts of Brett Kavanaugh’s treatment of women have surfaced, dating back to his years as a high school student at Georgetown Preparatory, The New York Times reports. Kavanaugh’s yearbook page reveals a high schooler immersed in sports, drinking and parties at the beach. In addition to these typical jock activities, there was an odd mention of “Renate Alumnius"—a reference to a student at a Catholic girls’ school named Renate Schroeder, now Renate Schroeder Dolphin.

Renate’s name appears numerous times in the Georgetown Prep’s 1983 yearbook on students' pages, as well as in a group photograph with nine football players, including Kavanaugh, labeled the “Renate Alumni.” Two of Kavanaugh's classmates say the "Renate" comments were regarding the men’s unabashed discussion of their sexual exploits with Renate. A former Georgetown Prep student told The New York Times, “They were very disrespectful, at least verbally. I can’t express how disgusted I am with them, then and now.”

Kavanaugh and Dr. Christine Blasey Ford are scheduled to testify on Thursday before the Senate Judiciary Committee concerning accusations that he sexually assaulted her in high school. Thus, his time at Georgetown Prep is being carefully examined. This past month, Renate Schroeder Dolphin, as well as 64 other women who knew Kavanaugh in high school, signed a letter to the Senate Judiciary Committee stating that “he has behaved honorably and treated women with respect.” Dolphin was unaware of the yearbook jabs when she signed the letter on September 14th.

In a statement to The New York Times, Dolphin said, “I learned about these yearbook pages only a few days ago. I don’t know what ‘Renate Alumnus’ actually means. I can’t begin to comprehend what goes through the minds of 17-year old boys who write such things, but the insinuation is horrible, hurtful and simply untrue. I pray their daughters are never treated this way. I will have no further comment.”

Alexandra Walsh, one of Kavanaugh’s lawyers, also issued a statement, which read, “Judge Kavanaugh was friends with Renate Dolphin in high school. He admired her very much then, and he admires her to this day. Judge Kavanaugh and Ms. Dolphin attended one high school event together and shared a brief kiss good night following that event. They had no other such encounter. The language from Judge Kavanaugh’s high school yearbook refers to the fact that he and Ms. Dolphin attended that one high school event together and nothing else.” In a response by way of her lawyer, Dolphin says, “I think Brett must have me confused with someone else, because I never kissed him.”

In a sad attempt at damage control, Kavanaugh defended his behavior in high school with the typical "boys will be boys" rhetoric. He told Fox News, “People might have had too many beers on occasion and people generally in high school—I think all of us have probably done things we look back on in high school and regret or cringe a bit.” Many of his former peers recalled Georgetown Prep having a culture of objectifying women at the time. One classmate mentioned Kavanaugh and his friends were part of the school’s “fratty” culture and talked a lot about “sexual conquest with girls.”

While it should be common sense that an attempted rapist should not have a seat on the Supreme Court, many Americans don’t care whether or not he’s guilty. You know, 'cause Boys will be boys, right? He was just drunk, everyone does stupid things when they’re drunk, right? And It happened so long ago, so he shouldn’t be held responsible, right?  He can’t still be like that, right? It’s all just locker room talk, right?

These defenses were used in Brock Turner’s trial. They were used during Trump’s campaign. And they’re now being used with Kavanaugh. What’s arguably most disturbing about these arguments is that they come to the direct conclusion that these men are, in fact, guilty. Kavanaugh’s statements on Fox News reveal that perhaps he did do exactly what Dr. Blasey is accusing him of, but, according to him, it shouldn’t matter because it was just high school. Such notions reinforce dangerous beliefs that the future of a man holds more value than the future of the woman he assaulted. And yet, people still wonder why women don’t immediately come forward to report trauma, when such reports that have historically been met with doubt and shame.

Header photo via The White House