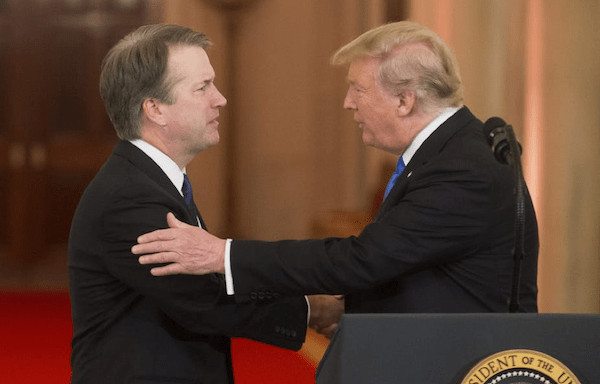 Over the weekend, Brett Kavanaugh’s confirmation hearing just got more complicated: another woman has come forward with accusations of sexual assault. On Sunday night, The New Yorker reported the account of Deborah Ramirez, a domestic abuse advocate who attended Yale with Kavanaugh. According to Ronan Farrow and Jane Mayer's report, Kavanaugh exposed himself to Ramirez and demanded she "kiss it" during a drinking game during freshman year, to the ridicule of male onlookers.

The Democratic Senate offices believe the allegations merit further investigation. “This is another serious, credible, and disturbing allegation against Brett Kavanaugh. It should be fully investigated,” Senator Mazie Hirono, of Hawaii, told The New Yorker. Of the four Democratic senators to receive information about the allegation, at least two are investigating it.

Kavanaugh’s rebuttal was swift: “This alleged event from 35 years ago did not happen. The people who knew me then know that this did not happen, and have said so. This is a smear, plain and simple. I look forward to testifying on Thursday about the truth, a defending my good name—and the reputation for character and integrity I have spent a lifetime building—against these last-minute allegations.”

In the face of mounting accusations, the White House has (unsurprisingly) only strengthened their support of Kavanaugh.

White House spokesperson Kerri Kupec said, “This 35-year-old, uncorroborated claim is the latest in a coordinated smear campaign by the Democrats designed to tear down a good man. This claim is denied by all who were said to be present and is wholly inconsistent with what many women and men who knew Judge Kavanaugh at the time in college say.”

To call these claims, “uncorroborated,” though, isn’t quite accurate. The New Yorker contacted dozens of former classmates, to mixed results. One identified source reported that he was “‘one-hundred-per-cent sure’ that he was told at the time that Kavanaugh was the student who exposed himself to Ramirez,” and independently corroborated many of the same details reported by Ramirez.

The report continues:  “Another former classmate, Richard Oh, an emergency-room doctor in California, recalled overhearing, soon after the party, a female student tearfully recounting to another student an incident at a party involving a gag with a fake penis, followed by a male student exposing himself.”

One of the male classmates accused of egging Kavanaugh on at the party to expose himself also gaves his take:

I don’t think Brett would flash himself to Debbie, or anyone, for that matter,” he said. Asked why he thought Ramirez was making the allegation, he responded, “I have no idea.”

Mark Judge, a conservative writer, recently emerged as a prominent witness and defender of Kavanaugh. In her initial report, Ford accused Judge of being in the room during her assault, “alternately urging Kavanaugh to 'go for it' and to 'stop.'’ Judge has claimed “no resolution” of the event.

In Sunday night’s New Yorker article,  Kavanaugh’s ex-girlfriend of three years, Elizabeth Rasor, gave a more damning take on Judge. Rasor named him as Kavanaugh’s accomplice during the parties, claiming Judge told her “ashamedly about an incident in which he and other boys took turns having sex with a drunk woman.” Kavanaugh was not presumed to be present at this incident, but Rasor’s account is being taken seriously.

Nearly an hour after the article went live, attorney Michael Avenatti tweeted a screenshot of an email in he claimed to have “significant evidence” that Judge, Kavanaugh, and friends would “participate in the targeting of women with alcohol/drugs in order to allow a ‘train’ of men to subsequently gang rape them.” He wrote, "I represent a woman with credible information regarding Judge Kavanaugh and Mark Judge. We will be demanding the opportunity to present testimony to the committee and will likewise be demanding that Judge and others be subpoenaed to testify. The nomination must be withdrawn," and clarified that his client isn't Ramirez.

Christine Blasey Ford has committed to testify before the Senate Judiciary Committee on Thursday. In light of Sunday's report, the pressure on Kavanaugh can only rise.

Tags: Brett Kavanaugh , The New Yorker , Sexual Assault , Supreme Court , #metoo
Support Feminist Media!
During these troubling political times, independent feminist media is more vital than ever. If our bold, uncensored reporting on women’s issues is important to you, please consider making a donation of $5, $25, $50, or whatever you can afford, to protect and sustain BUST.com.
Thanks so much—we can’t spell BUST without U.