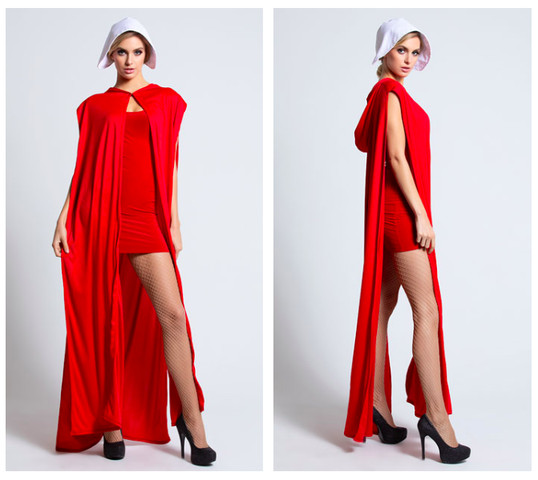 In this year’s edition of tasteless Halloween costumes, we present to you Sexy Handmaid. Mashable reports that Yandy, an online lingerie and costume retailer, released the “Brave Red Maiden Costume” last week, with the description “An upsetting dystopian future has emerged where women no longer have a say. However, we say be bold and speak your mind in this exclusive Brave Red Maiden costume featuring a red mini dress, a matching cloak, with an attached hood, and a white bonnet headpiece.”

Clearly inspired by the uniform worn by women forced into sexual submission in Hulu’s The Handmaid’s Tale, the almost-$65 ensemble unsurprisingly received an onslaught of online criticism. In response to the backlash, Yandy removed the costume from their website and released the below statement. 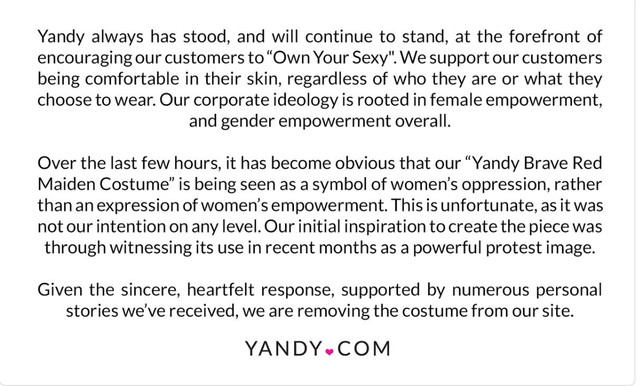 Fast Company writes that “the company was struck by the appearance of handmaidens at Brett Kavanaugh’s confirmation hearings and wanted to make it like that, but sexier.” The series, based on Margaret Atwood’s dystopian novel, takes place in the totalitarian society of Gilead, where selected women are forced to engaged in ritualized rape with high-ranking men for the purpose of procreation, as most women are unable to have children.

Since women’s reproductive rights are being called into question by powerful men in our current society, it’s difficult to comprehend how a sexualized version of a garment symbolizing a woman’s handmaid status, and therefore her government sanctioned abuse, could be seen as empowering. Similar sentiments echoed over Twitter. Molly Sanchez, a San Francisco based comedian and writer, tweeted, “Our society doesn’t take the rape of real women seriously, why should they take the rape of fictional women seriously?” Another user wrote, “Nothing like a sexy rape victim for Halloween fun huh.” This handmaid costume’s sexual overtones downplay a harmful misogynistic universe that, by law, allows and encourages the rape and denigration of women.

Now, if only Yandy would remove their entire collection of appropriative costumes.

Breaking Down Cultural Appropriation In Pop Music And More

Jay-Z And Azealia Banks Call Out Miley Cyrus On Cultural Appropriation; She Doesn’t Get It