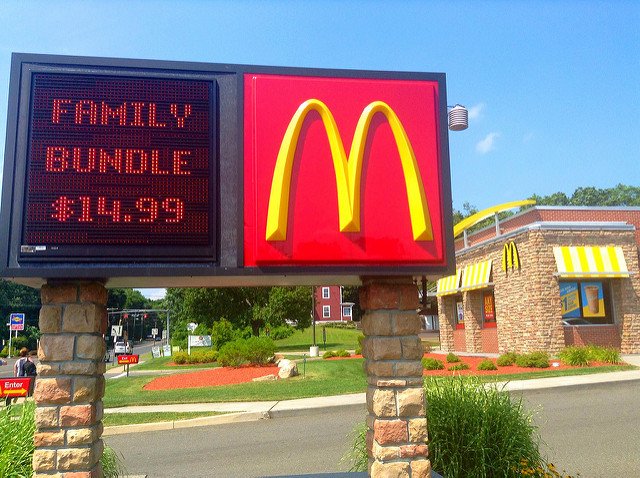 McDonald’s employees throughout the country walked out of franchises to protest sexual harassment in the workplace on Tuesday morning. Protestors marched with blue tape over their mouths to McDonald’s University, where the company trains managers. Upon arrival, they chanted demands for the company to do more to address sexual harassment, The Washington Post reports.

The strike, the first multistate strike aimed at workplace sexual harassment, took place in Chicago, San Francisco, Los Angeles, St. Louis, Kansas City, and Durham, N.C. The effort comes after ten women in eight different states filed complaints with the U.S. Equal Employment Opportunity Commission in May, alleging experiences with sexual harassment such as physical assault and lewd comments while on the job, and a workplace environment that ignored or retaliated against claims of inappropriate behaviour.

In response to the May complaints, McDonald’s contended that it did not tolerate misconduct. “At McDonald’s Corporation, we are and have been committed to a culture that fosters the respectful treatment of everyone,” said spokeswoman Terri Hickey in a statement. “There is no place for harassment and discrimination of any kind in our workplace.” However, employees who took part in Tuesday’s protest said they hadn’t seen any change at work since the complaints were issued.

“We’ve seen in the news that sexual harassment is happening to others at major corporations like CBS, and now Hollywood actresses have filed lawsuits against their CEOs and media moguls,” said Adriana Alvarez, a McDonald’s employee from Chicago. “Now, more than ever, it is imperative that fast-food workers take action and use our voices in the same way — to hold McDonald’s and other fast-food chains accountable. The public does not know what we go through behind the counters, the cash registers, even in the bathrooms, the janitor’s closets. But today, the world will find out more.”

Employees are demanding that McDonald’s hold mandatory training for managers and employees to prevent sexual misconduct, and that the franchise establish a secure system for workers to respond to sexual harassment. There are also requests for a committee involving the collaboration of workers and representatives from women’s rights groups to address misconduct.

McDonald’s did not comment on the strike, but told the Associated Press, “We have policies, procedures and training in place that are specifically designed to prevent sexual harassment at our company and company-owned restaurants, and we firmly believe that our franchisees share this commitment.”

Fast food workers are among the most vulnerable to sexual harassment in the workplace. Data from Hart Research Associates shows that 40% of women in low wage-service jobs have experienced unwanted advances on the clock, with 42% feeling the pressure to accept this harassment out of a need to keep their jobs.