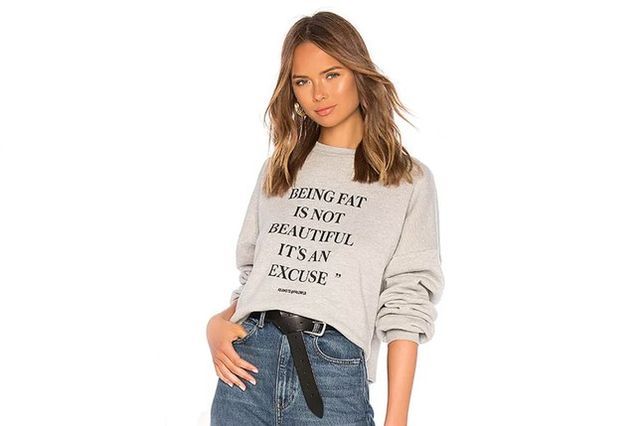 In the latest misguided attempt at subversive clothing, Revolve released—and then removed—a capsule collection of sweatshirts designed by LPA and Lena Dunham in a collaboration. The sweatshirts were branded with misogynistic remarks left to different celebrities over Instagram.

The quotes were seemingly pulled directly from the comments sections of photos posted by different celebrities involved in the project. In small font beneath the large letterings are citations showing who the insults were said to. One sweater reads "Being Fat Is Not Beautiful It’s An Excuse," with, in smaller letters, "as said to @Palomija," referencing model Paloma Elsesser’s Instagram handle. Other sweaters reference comments left on the Instagrams of Lena Dunham, Suki Waterhouse, and Cara Delevingne, such as “Horrible Result of Modern Feminism” and “Too Bony To Be Boned,” Fashionista reports.

Obviously, there is so much that is blatantly problematic about this campaign. Beyond seeming to promote the ignorant negativity spawned by online trolls, another dubious misstep was Revolve's choice to feature a thin, white woman modelling the horribly fatphobic remark directed at Elsesser—especially considering Revolve generally doesn’t sell clothing larger than a size 10 (the sweatshirts go up to a 12/14—larger than Revolve's usual range, but not including plus sizes).

Elsesser's friend Florence Given writes that Elsesser did not approve the way Revolve modeled and marketed the sweatshirt. "I heard back from @palomija and she told me she is MORTIFIED about how this quote has been used, and is asking for her quote to be pulled," Given wrote in an Instagram post.

Dunham detailed her involvement with the collection in an Instagram post, explaining that she had intentions for the LPA series to expose internet abuse, but that the marketing route taken by Revolve was a dramatic departure from this goal, Refinery29 reports. "For months I’ve been working on a collaboration with my friend Pia’s company LPA through parent company @revolve - sweatshirts that highlight quotes from prominent women who have experienced internet trolling & abuse," she wrote. "...without consulting me or any of the women involved, @Revolve presented the sweatshirts on thin white women, never thinking about the fact that difference and individuality is what gets you punished on the internet, or the lack of diversity in representation is part of the problem... As a result, I cannot support this collaboration or lend my name to it in any way," Dunham wrote. (She didn't address the design of the sweatshirts themselves or the decision to not carry plus-sizes.)

Following outraged responses, a spokesperson from Revolve issued a statement to Glamour, saying, "The prematurely released images featured on revolve.com [were] not only included without context of the overall campaign, but regrettably featured one of the pieces on a model whose size was not reflective of the piece’s commentary on body positivity. We at Revolve sincerely apologize to all those involved—particularly Lena, Emily, Cara, Suki and Paloma—our loyal customers, and the community as a whole for this error."

LPA also published a statement on Instagram on Wednesday to say that the collection was designed in collaboration with Lena Dunham, and they were planning on launching it with photos of Dunham modeling the pieces and a statement about the project. LP announced that they decided to pull the collection and promised to make a donation to the charity Girls Write Now.