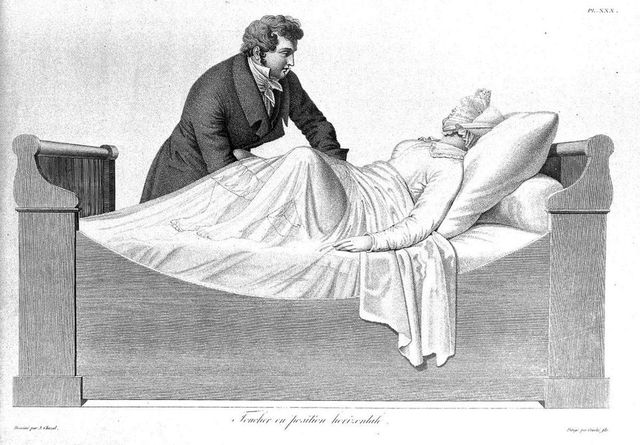 Did you know that doctors and med students are allowed to practice pelvic exams on patients who they are under anesthesia for unrelated surgeries? Did you know that they do not need to ask first, or let them know after if it happened?

I first heard about this phenomenon on the Throwing Shade podcast when Erin Gibson, author of the new book Feminasty, brought it up as her women's topic of the week. Erin read a report from the NYU Ethics Division detailing this ongoing practicing and continued to rant about how gross it is. I immediately started asking my friends if they knew about it. The responses to whether or not they knew was mixed, but the responses of disgust were consistent. I started doing further research and found that this practice is shockingly widespread.

It is very common for teaching hospitals around the world to have med students “practice” performing pelvic exams on a surgical patient while they are under anesthesia without their consent, or even knowledge. According to Medscape, oftentimes, multiple med students will practice on the same patient. In the US, non-consensual pelvic exams are legal in every state besides Hawaii, California, Illinois, and Virginia.

Phoebe Friesen, a medical researcher, published an article called "Educational Pelvic Exams On Anesthetized Women: Why Consent Matters" in which she studied the phenomenon. She noted that in 2005, a study at University of Oklahoma “found that a large majority of medical students had given pelvic exams to gynecologic surgery patients who were under anesthesia, and that in nearly three quarters of these cases the women had not consented to the exam.” She also states that “the vast majority (72–100%) of women say they expect to be specifically consented for an educational pelvic exam performed while they are under anesthesia” and that many women “said they would feel ‘physically assaulted’ if not consented.”

According to Medscape, a 2007 study done in Canada found that 72 percent of med students admitted to having done a pelvic exam on an anesthetized patient. A common argument for these non-consensual pelvis exams made by doctors is that many patients would say no—which is really a further reason for why they should be asking. If patients are not willing to be used as test subjects, medical school should hire people to practice on who are informed and willing.

Lauren Dobson-Hughes, an activist and former president of Planned Parenthood, wrote a thread on Twitter about this epidemic. She said that after there was media coverage about this happening, many people came forward about unexplained internal bruising and vaginal pain after undergoing an unrelated surgery. She heard anecdotally from many others saying their demands for their own medical records had been blocked or redacted as hospitals attempt to cover up their rape-y practices.

In 2013, writer Tasneem published a personal essay on XOJane about how she suspected this had happened to her but she has no way of knowing. She double checked the fine print in what she signed before her surgery to make sure she had not unknowingly agreed to it but there was nothing. She writes, “Why wouldn’t they just ask me if they could try it out while I was conscious, I wondered? I am a sexual health activist, and I’d love to help people get better at giving pelvic exams!” She called her doctor to ask him directly and, “he responded brusquely that he does so many surgeries that he could not say for sure whether or not it had happened.” She then asked if it is something he’s done in the past with medical students and he said yes. She filed for an investigation with the patient advocacy center of the hospital, but she never heard back.

This widespread use of patients' bodies is intwined in the sexual assault epidemic we are seeing rise to the surface with the #MeToo movement. It is a further assumption that any body that is not cis and male is open for invasive practice without question. If you live in a state where this is legal, which is very likely since that includes 46, pressure your legislatures to change that.

Top Image: Illustration of a doctor performing a pelvic exam, from an 1825 medical textbook

Tags: Hospitals , sexual assault , pelvic exams , obgyn , women's health
Support Feminist Media!
During these troubling political times, independent feminist media is more vital than ever. If our bold, uncensored reporting on women’s issues is important to you, please consider making a donation of $5, $25, $50, or whatever you can afford, to protect and sustain BUST.com.
Thanks so much—we can’t spell BUST without U.