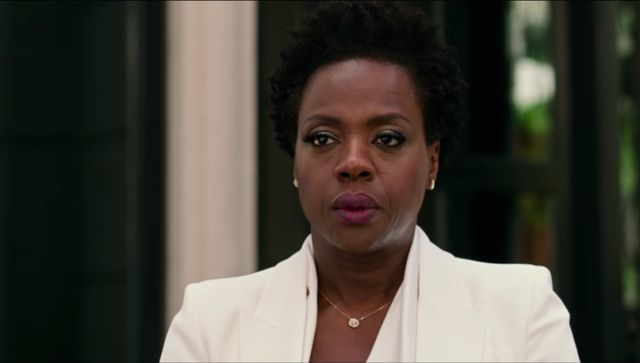 In her recent Variety cover story, Viola Davis talked her upcoming thriller, Widows, and her iconic role on How to Get Away With Murder. But she also took the opportunity to shed light on some of the more serious issues going down in Hollywood—including the pay gap.

While actresses like Michelle Williams and Claire Foy have made recent headlines for receiving lower salaries than their male costars, Davis noted that we don’t talk about how women of color earn significantly less than white women in the entertainment industry. “There are no percentages to show the difference. It’s vast,” she said. “Hispanic women, Asian women, black women, we don’t get paid what Caucasian women get paid. We just don’t.”

This wage gap is present in pretty much every industry: the National Women’s Law Center reports that black women in customer service receive 75 cents for every white man’s dollar, and black women in medicine make 54. Though we don’t have these statistics for women in film and TV, as Davis mentioned, there’s a disparity—one that’s only underscored by the shortage of roles for women of color. Variety cited a recent study by the USC Annenberg School for Communication and Journalism, writing that 43 of 2017’s top 100 films lacked any black female characters.

“We’re not even invited to the table,” Davis said. “I go to a lot of women’s events here in Hollywood, and they’re filled with female CEOs, producers, and executives, but I’m one of maybe five or six people of color in the room.”

Thanks to recent box office hits like Girls Trip and Crazy Rich Asians, and Davis’ upcoming Widows—which co-stars Michelle Rodriguez and Elizabeth Debicki—common perceptions about what kinds of cast can make a successful film are shifting, but there’s still a long way to go. As Davis said: “We have the talent. It’s the opportunity that we’re lacking.”

Viola Davis Takes On The Judicial System With "The Last Defense"

Viola Davis And Lupita Nyong'o Are Co-Starring In A Movie About Women Warriors: Link Roundup

Tags: Viola Davis , Hollywood , pay gap , Widows , How to Get Away With Murder
Support Feminist Media!
During these troubling political times, independent feminist media is more vital than ever. If our bold, uncensored reporting on women’s issues is important to you, please consider making a donation of $5, $25, $50, or whatever you can afford, to protect and sustain BUST.com.
Thanks so much—we can’t spell BUST without U.