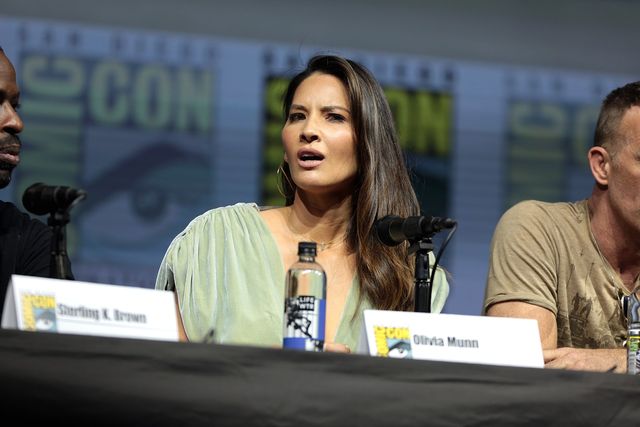 The latest news regarding Shane Black’s reboot of 20th Century Fox’s Predator franchise gives the film’s title a more sinister meaning. On September 6th, The Los Angeles Times reported that the studio cut a scene featuring Olivia Munn and Steven Wilder Striegel, a longtime friend of Black. After filming, Munn discovered that Streigel is a registered sex offender: in 2010, Striegel pleaded guilty to risk of injury to a child and enticing a minor by computer in response to allegations of his attempts to seduce a 14-year-old girl into a sexual relationship. Striegel served six months in prison.

After Munn shared this information with her lawyer and manager, Fox studio executives were quick to remove Striegel from the film. In a statement to The Los Angeles Times, a Fox spokesperson said, “Our studio was not aware of Mr. Striegel’s background when he was hired. We were not aware of his background during the casting process due to legal limitations that impede studios from running background checks on actors.” However, Shane Black was well aware that his friend is a registered sex offender and originally issued a defense saying, “I personally chose to help a friend,” but later released a follow-up statement and apology.

Munn told The Los Angeles Times that she found the ordeal “both surprising and unsettling that Shane Black, our director, did not share this information to the cast, crew, or Fox Studios prior to, during, or after production.” She then had to go to Toronto International Film Festival to promote the film, explaining on Twitter that she's contactually obligated to do so. However, Munn found that she had to do interviews alone (save for one with eleven-year-old Jacob Tremblay). According to The Hollywood Reporter, most of Munn’s co-stars chose to withdraw from scheduled interviews, likely because of the controversy surrounding the deleted scene.

After finishing an interview with Tremblay, Munn sat down for a solo interview with The Hollywood Reporter in which she discussed what transpired after the initial bombshell, as well as her justified disappointment in Shane Black and her fellow cast members. What’s important to note here is that no matter how shocking and uncomfortable this news was for the entire production staff, Munn immediately emphasized that “It’s been most tough on the Jane Doe that was in the story because the victim is the victim. Whatever she’s gone through the subsequent years is most important to me.”

When asked about how difficult it’s been to deal with this incident with the rest of the cast and Shane Black, Munn does not mince her words, saying, “I don’t know why this has to be such a hard fight. I do feel like I’ve been treated by some people that I’m the one who went to jail or I’m the one that put this guy on set… I don’t know how to pretend, I don’t know how to skirt around the issue. I just know how to be honest about it. It’s a very lonely feeling to be sitting here by myself when I should be sitting here with the rest of the cast.” She added that while she appreciates Black’s apology, she would have preferred to receive it directly as opposed to reading it on the internet.

After the Hollywood Reporter interview was published, Munn's Predator costar Sterling K. Brown gave a statement supporting her on Twitter, and Keegan-Michael Key's representative gave a statement to the Hollywood Reporter saying Key had reached out to Munn privately to support her the week before. Predator cast members Boyd Holbrook, Trevante Rhodes, and Thomas Jane have not commented.

In response to questions regarding a more structured hiring system to prevent such things, Munn specifies that the industry’s top executives cannot be relied on to make changes as “they are the people who created this disparity in the first place.” She credits people on the internet for keeping the outrage and the conversations alive. “If the fans and public keep expressing that they won’t go support people who are abusers or organizations or companies that support that, then that will make them change.”