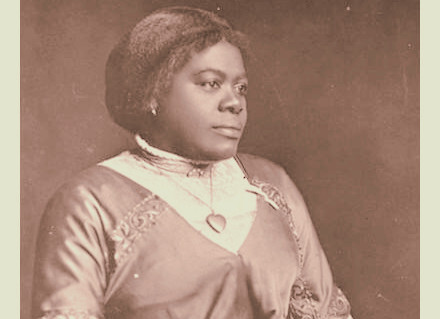 An educator, businesswoman, and leader, Mary McLeod Bethune faced countless insurmountable odds in her life, yet she never stopped fighting. Throughout her life, she battled racism, sexism, and even the KKK. And in doing so, she changed not only America, but the world!

So buckle up, because you may not have heard of this incredible woman. But I promise that once we’re done, you will be obsessed! 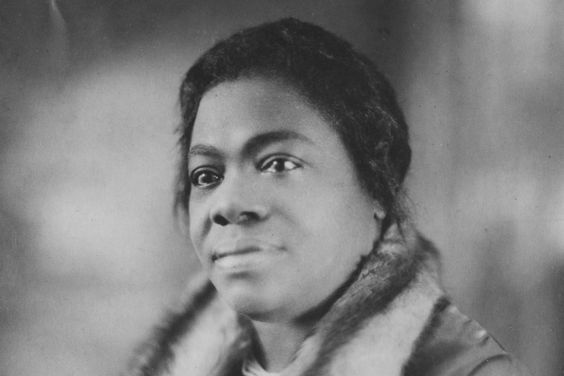 Seriously, this woman… just everything

Born in 1875 to former slaves, Mary was the youngest of 17. Despite her parents' endless hard graft, they struggled to live day-to-day. And it didn’t take little Mary long to work out the root of this struggle.

There was only one difference between her family and other families. One thing separating her and the possibility of coming home and knowing there would be food on the table. That separated her from knowing that in the future she’d have opportunities, that she could expect to earn a fair wage and work to live in a house with basic features like windows.

The only thing stopping Mary and her family was the color of their skin. Mary vowed to change this.

Again, Mary was a child when she decided to dedicate her life to revolutionizing black rights.

And so, every day, Mary walked miles to get to the only school that would teach her. Then she’d return home and teach her parents and siblings what she’d learned that day. Her tenacity didn’t go unnoticed, and a local missionary reached out, offering to pay for the remainder of her education.

Soon, Mary started attending religious and missionary schools, and in 1895 she became the first African American student to graduate from what is now known as The Moody Bible Institute (great name by the way, Moody).

Mary dreamed of becoming a missionary, spreading her love for education across the world. But this dream was quickly dashed when she was curtly informed that nobody needed nor wanted a black missionary.

Did this stop Mary? Of course not! If she wasn’t allowed to join a mission, she’d set off on her own.

So, just like that, Mary packed up her bags and headed around the US to teach overlooked children from minority backgrounds.

Then, in 1898, Mary met and married her husband, Albertus; the two soon welcomed a son, Albert. Having a child to look after didn’t slow Mary down; in fact, she decided the time was now right for her to open up her own school.

Seriously, just you wait. Mary hasn’t even gotten started showing how strong she is!

Mary set up shop in Daytona, Florida, with (supposedly) just $1.50 in her pocket, opening the doors to the Daytona Educational and Industrial School for Negro Girls in 1904.

Desks and chairs were made from crates, ink was made elderberry juice, and pens were whittled from wood. Mary kept the lights on by joining forces with local parents to sell homemade pies.The whole endeavour was shaky as all hell, only being held together by the sheer force of Mary’s willpower. Which was good—because this patchwork school was proving to be revolutionary, finally allowing black children an education.

….This didn't go down well with the KKK.

Now let’s be clear, this was not a good time to be a black person in Florida. Lynchings were a regular occurrence, with Florida going on to have some of the highest rates of lynching anywhere in the US. The May before Mary opened her school, four Florida men were murdered in separate lynchings within just two days. In short, Daytona, Florida in 1904 was not the kind of place that was ready for the kind of monumental change that Mary was creating.

And so the local branch of the Klu Klux Klan showed up outside Mary’s school.

But Mary stood strong in the school's doorway. Unmovable. Despite the very real threat to her life, she steadfastly refused to stand down. Eventually the KKK left. Two years later, Mary's school had gone from less than a dozen students to 250. 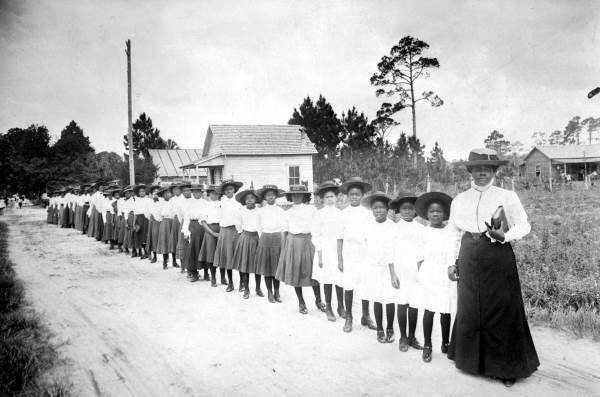 Mary with early students of her school

But as the school flourished, Mary’s home life was crashing and burning. The huge workload had put a huge strain on her marriage, and in 1907, Albertus left her. Mary was now a single mother: one that not only had her own child to care for, but hundreds of others.

And yet despite all the obstacles against her, Mary persevered. She decided she wouldn’t just care for her son, her students, and staff, but she’d help the entire community!

Mary opened medical facilities near her school to tackle the awful quality of available local healthcare for black people. She arranged for her school to be combined with a local college, forming The Bethune-Cookman College and allowing even more kids a shot at an education.

Mary then focused her attention on women. She started clubs that would simultaneously help women gain new skills, create opportunities for them, AND equip these women with the tools they’d need to fight for their rights.

By 1924, she was elected head of the National Association of Colored Women, immediately getting to work overhauling the NACW's management system and creating a headquarters in the capital.

And of course, Mary didn't stop there!

She led a drive to encourage African Americans to register to vote.

She invested in black business and worked to maximise those businesses potential.

She helped launch newspapers that were run by African Americans and covered news that was otherwise (quite literally) white-washed.

All this work—of course—meant that once more the Klan were at Mary’s door, threatening her life unless she stopped. 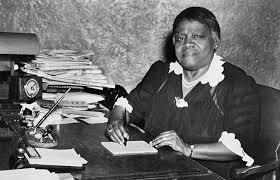 Mary at work, probably writing a haiku about all the fucks she doesn’t give

In the 1930s, Mary started putting together what she called "the black cabinet," a group of leading African Americans who advised President Roosevelt.

The cabinet helped lay the foundations for the Civil Rights movement, bringing issues facing black Americans into the forefront of politics and actively working to create change.

Groundbreaking doesn’t even cover it, and it could never have happened without Mary acting as the group's organizer and intermediary.

Mary with other members of the ‘Black Cabinet’ in the 1930s. Mary is (of course) standing in the middle of it all

Mary eventually retired due to her failing health. She returned to Florida to live out the rest of her life. In 1955, Mary delivered her last speech at a luncheon held in her honour.

She used the moment not to celebrate her work, but to thank those around her and encourage others to continue the fight. She said in a speech, "I have been the dreamer, but oh how wonderfully you have interpreted my dreams."

Mary died just a few months after that speech, at the age of 79. She’d started life in poverty and fought her way out, transforming not just her own life, but millions of others', too. She left a legacy that lives on today. 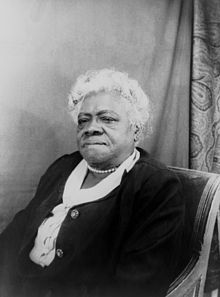 The incredible Mary Mcleod Bethune: Did I not tell you you’d become obsessed with her?!

This was interesting, where can I find out more? Now, I’ve struggled finding a really amazing book on Mary (please do let me know if you have one!). However, I’m going to leave you with this: Mary’s public will, in which she outlines the legacy she is leaving and urges you to continue the fight. I promise, it’ll be the best thing you read this week.

In Defense Of Pop Culture Adaptations Of History