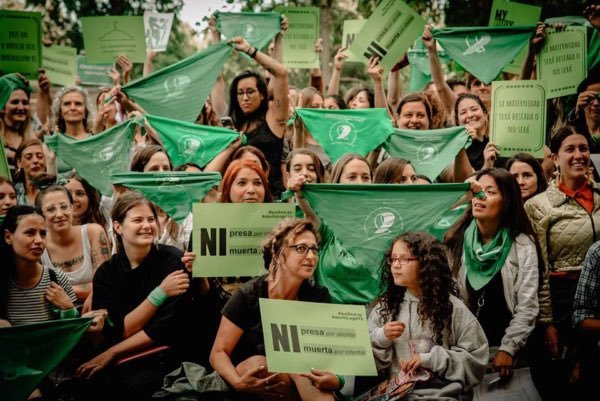 Just days after Argentina’s government failed to legalize abortion, a 24-year-old woman has lost her life to an unsafe abortion.

Lacking a safe and legal option, the mother of two, referred to by Argentinian newspaper Clarín as Elizabeth, attempted to end her pregnancy at home on Sunday. According to The Cut, Elizabeth contracted a serious infection, which sent her into septic shock. Elizabeth passed away on Tuesday.

In Argentina, abortion is illegal except in cases of rape or where the health or life of the pregnant person is threatened. Last week, the Senate voted on a historic bill would have legalized abortion up to fourteen weeks. Though it was passed by Argentina’s lower house, the bill was killed in the upper house.

Elizabeth is one of thousands who has died due to a lack of safe and legal access to abortion in Argentina. According to the Guardian, 45,000 to 60,000 women are hospitalized each year due following illegal abortion attempts.
The Guttmacher Institute reports that banning abortion does nothing to ensure that it won’t occur. Instead, it drastically increases the possibility that pregnant people will die following an unsafe procedure.

Last week’s vote once again demonstrates the Catholic Church’s stranglehold on Argentinian policy. According to Clarín, the church was the “key player” in stopping the law, as church officials personally urged lawmakers to kill the bill. Argentina has a long history of making abortion inaccessible, and even criminalizing those who perform and receive them.

Even in the supposedly acceptable cases for abortion—if the life of the pregnant person is danger, or if the pregnancy was the result of rape—the government has historically made access to abortion care difficult to impossible. According to Vox, health providers often lack protocol for helping patients access abortion, or they may simply refuse to perform the procedure. This can result in delays that push past the date when terminating the pregnancy is allowed, forcing the patient to carry the pregnancy to term.

Views on abortion are so strict that in 2016, an Argentinian woman known as Belén was convicted of murder following a miscarriage. Doctors insisted that Belén terminated her pregnancy on purpose, and despite a complete lack of evidence, she was sent to jail. Following an international outcry, Belén was released—but it took two years to get her out.

Last week’s vote was a step backward for Argentina. But the activists who pushed for this bill have no plans to stop fighting for women like Elizabeth and Belén. The grassroots feminist movement Ni Una Menos (Not One Woman Less) has been working tirelessly to change the law, holding protests and camping out on the grounds of Argentina’s legislature.

“Liz, the 24-year-old young woman that was hospitalized in Buenos Aires after a clandestine abortion, has died,” Tweeted Raquel Vivanco of Ni Una Menos. “This is the outcome of the voting session in the Senate. They don’t care about the lives of the women. Legal abortion or clandestine abortion, that’s the discussion.” 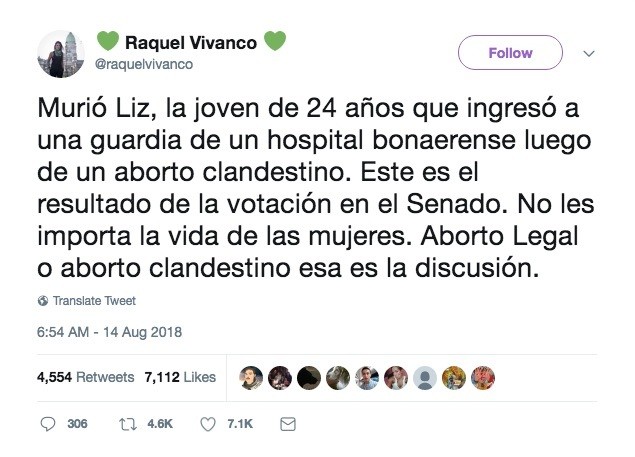