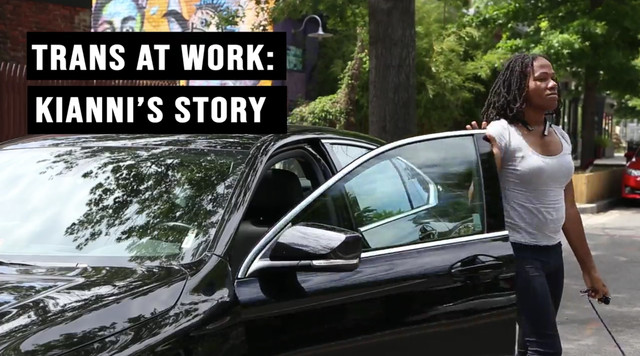 Kianni Jones, a 26-year-old trans woman of color, shares her story about her experiences as a rideshare driver in a short video created and edited by Liz Ellis Mayes and Lucy Augustine. After coming out as trans, Kianni struggled to keep a steady job due to transphobia. "Managers discussed to me that I had complaints in going into the female restroom from other customers," she says.

Once Kianni began working as a rideshare driver, she was able to earn enough to take her from below the poverty line to joining the middle class. However, she still faces challenges, such as passengers who misgender and harass her, and she sometimes feels unsafe. "You have to deal with the usual uneasiness, the fact that you're transgender and you don't know exactly how you're going to perceived by the person that's entering into your vehicle, and you don't know how they're going to act based off of what they see," she explains.

Now, Kianni has enrolled in school so she can ultimately follow her dream of opening her own spa. "This is just a stepping stone like any other job," she says. "To have stability, to live a good life."

Liz Ellis Mayes is a multimedia journalist and video editor. With a focus on the intersection of gender, class and identity, her most recent project explores the dynamics of gender identity and beauty pageants. Originally from the Pacific Northwest, she now lives in Washington, D.C. and works in television as an editor. Though generally a gentle person, she would arm wrestle you for a good gin and soda.You can find her on Twitter at @liz_mayes, on Instagram at @lizziemayes, and see more of her work at lizmayes.com.

Lucy Augustine is a filmmaker living and working in New York City. She has worked on projects for Discovery Channel, Pop Network and Corra Films and has had work shown at Flat Earth Film festival in Seyðisfjörður, Iceland.