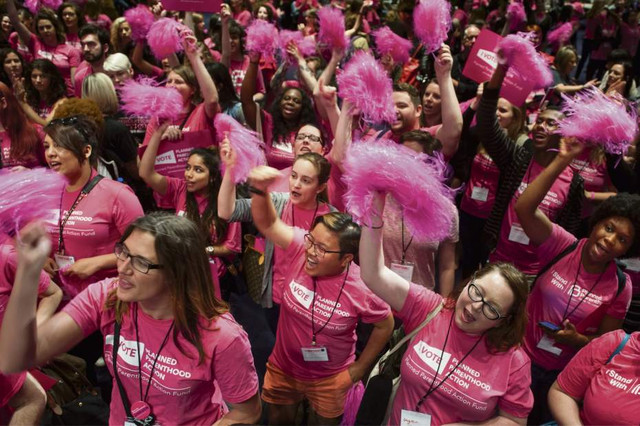 “Maybe our America is not dead,” Aja Naomi King told us from the stage, quoting the lawyer, filmmaker, and Sikh faith leader Valarie Kaur, “but a country waiting to be born.” The How To Get Away With Murder actress was speaking to two thousand Planned Parenthood organizers, patient advocates, and volunteers at our national Power of Pink conference, held this July in Detroit, MI. She gave us Kaur’s words to conclude her rousing speech on power, persistence, and relational organizing strategies, one of many incredible talks given live or on video over a three-day span. But even after hearing from heavy-hitters like Barack Obama, Cecile Richards, and Alicia Garza, what burned the brightest in Detroit was the fire of fearlessness I found among the student activists who came there to learn and strategize.

At this point in Trump’s presidency, of course, Planned Parenthood is long-accustomed to a fierce and relentless game of defense. The organization has had to tirelessly fight battles on multiple fronts: in the halls of Capitol Hill, in the courts, and in the streets. Their Generation Action network, made up of young activists and organizers around the country, has been fighting these battles on college campuses and in their surrounding communities in every state. They have mobilized to protect and retain Title X funding for Planned Parenthood patients, to promote and educate around safe and consensual sex, to shine a light on the sexual violence, misogyny, homophobia, transphobia and racism being allowed to proliferate on their campuses, to expand access to health care for fellow students, and to get out the vote as we hurtle toward the midterm elections this November.

But at Power of Pink, alongside these seasoned activists, a brand-new wave of students and young supporters showed up—in huge numbers—and prepared to turn their laser focus on a new battleground: the Supreme Court, and the renewed threat to Roe v. Wade.

While Planned Parenthood contingencies from every part of the country rallied around the cause of protecting Roe from Brett Kavanaugh, the anti-abortion judge nominated by Donald Trump (after being hand-selected from a list of twenty-five options hand-selected by the ultra-conservative Federalist Society), affiliates from two states gathered with an extra sense of urgency. As national DC-based strategists set the stage for the coming fight to keep SCOTUS’ jurisprudence from shifting to the right - and to stop Roe and other key decisions protecting civil and LGBTQ+ rights from being overturned - all eyes fell on the two states with Republican senators most likely to diverge from their party with their votes at Kavanaugh’s confirmation hearing: Alaska (Sen. Lisa Murkowski) and Maine (Sen. Susan Collins). The young activists from Maine suddenly feel the full weight of this enormous responsibility.

“Roe has saved countless lives,” said Elise, a senior at a small college in the northern part of the state. “All of the threats to reproductive healthcare have motivated me to take action. We cannot let an anti-women, anti-immigrant, anti-LGBTQ administration gut our care.” She said that she would be bringing relational organizing tools home from Detroit to launch letter-writing campaigns in her campus community, and would refuse to shy away from politics among her peers, friends, and family going forward.

As students gathered around tables, overflowing onto the floor and spilling out of conference rooms into hallways at the cavernous convention center, they wrote letters, made phone calls, left voicemails, shot off thousands of texts, and flooded with their social media networks in service of the mission to make sure that Mainers’ voices are heard by Senator Collins.

They shared stories, with the Senator and with strangers and with one another, of how their young lives had been touched by access to reproductive healthcare: a high-schooler who had only been able to recover from her trauma and continue her education thanks to a safe and legal abortion following a sexual assault, a college junior who was able to obtain an IUD when her abusive partner and parents obstructed her attempts to use birth control pills and condoms.
The students discussed how to push through the emotional response to attacks on the rights held most sacred, and how to use these feelings as fuel for the fight.

“There’s a lot of fear in this work. A lot of anger,” an activist named Marissa, who is preparing to graduate from a Maine university this coming year, told BUST. “A lot of moments where you don’t know if we’ll ever reach the peak in front of us. But it’s for the people who aren’t afforded the privilege to live their true, authentic lives or to access the healthcare that they need that I organize and do this work.”

As the weekend in Detroit came to a close, and the two thousand volunteers considered the tools and strategies they would be bringing home to their communities in resistance, the students began to make plans. They sounded the urgent call to their friends and families: to get involved, to gather and rise up together, to transcend the pain and anxiety of being a young citizen under President Trump by taking strong and immediate action.

Like their adult counterparts, the onslaught of daily threats to their communities and values had left the young activists exhausted, stressed, overwhelmed, and often afraid for our future. But they were done helplessly scrolling through the news. They were done being quiet and polite. They would no longer accept complacency among their peers. They had had enough.

As a student from a small liberal arts college told BUST, the weekend of intense and emotional work was galvanizing and emboldening in a deeply frightening time. “I think my greatest source of fear right now is for the future of our country, and the place within that future for anyone that is not a straight, white, cisgender male. By working with and for Planned Parenthood in this critical moment in history, I feel as though I’m doing my part to fight the powers that cause that fear.”

Want to get involved and help Planned Parenthood #SaveSCOTUS and fight for our rights? Go to www.plannedparenthoodaction.org, find a uniteforjustice2018.com rally near you on August 26th, and learn when the riseupforroe.com bus tour will be coming to your city!

5 Ways To Stand With Planned Parenthood

8 Vital Moments In The History Of Planned Parenthood

Hannah Matthews is an organizer, activist, and writer based in Portland, Maine. Her work has appeared in Time, Inc., SELF, and BUST Magazines, and online at McSweeney's Internet Tendency and Ravishly.com. She can be reached at hannahmatthewswrites@gmail.com