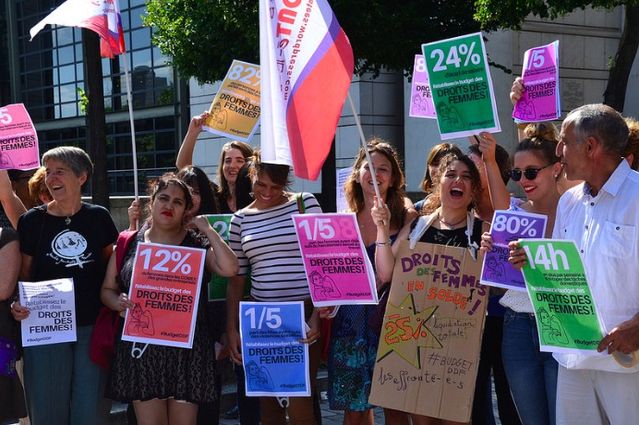 France is officially making moves to put an end to street harassment with a new law, passed August 1, that forces catcallers to pay fines for harassing and assaulting women on the street and on public transit. The legislation will go into effect this September, reports USA Today, and will also crack down on similar gendered harassment, including sexual assault and “upskirting”—photos taken under women’s clothing without consent.

Men who make sexual and sexist comments could be fined up to 750 euros (the equivalent of roughly $868). Those who take upskirt photos could be fined a significantly larger amount—around 15,000 euros, or $17,380. According to The Cut, the last major part of the bill will extend that statute of limitations for reporting child sexual assault to 30 years after the survivor turns 18. It was previously 20 years.

French President Emmanuel Macron has been trying to fix the country’s sexual assault climate, writes the Associated Press, but this necessary legislation was prioritized further after a student named Marie Laguerre shared footage of a man yelling at her in July. After Laguerre turned around to respond, the man slapped her.

The bill is a significant step for France, a country with a hyper-romantic, sexualized reputation. Just earlier this year, 100 powerful French women including actress Catherine Deneuve wrote an open letter fighting against the #MeToo movement. “Rape is a crime, but trying to seduce someone, even awkwardly, is not, nor is being gallant a macho aggression,” they wrote, according to The Atlantic. “We’re aware enough today to admit that the sex drive is by nature offensive and savage, but we’re also clear-eyed enough not to confuse an awkward pickup with sexual aggression.”

The lawmakers who helped write and pass the act, though, aren’t afraid to directly address—and challenge—what’s become the norm in French culture. “We want to preserve seduction, chivalry, and l’amour à la francaise by saying what is key is consent,” gender equality minister Marlène Schiappa told Europe 1 Radio. “What’s key is that the laws of the French republic forbid insulting, threatening, and following women in public spaces.”

However, ABC News writes that in a recent interview with the Associated Press, Laguerre said the legislation is “almost a joke,” and not nearly enough to stop the problem of street harassment.

“I don’t think it’s realistic because it means having police officers on every street,” she said. “The law sends a message, but for me, it’s not enough.”

Men Who Catcall Women Say Women Like Being Sexually Harassed

These French Teachers Are Fighting Sexism Through Gender-Neutral Language

Tags: France , catcalling , street harassment , sexual assault
Support Feminist Media!
During these troubling political times, independent feminist media is more vital than ever. If our bold, uncensored reporting on women’s issues is important to you, please consider making a donation of $5, $25, $50, or whatever you can afford, to protect and sustain BUST.com.
Thanks so much—we can’t spell BUST without U.