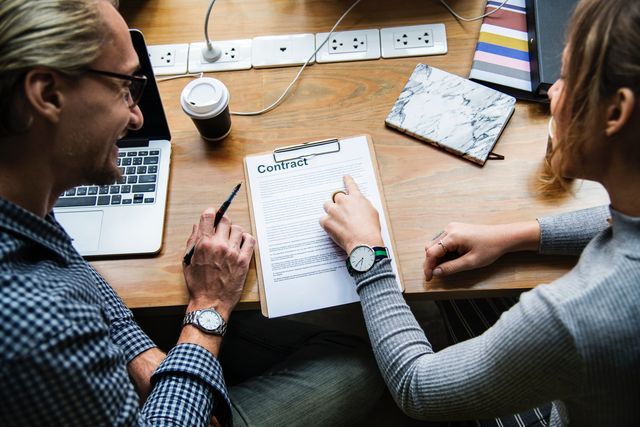 The gender wage gap is no longer something most people deny the existence of. Most people are well aware that women earn less than men for equal work. From 2008 to 2017, the gender wage gap decreased by only 2%; women as a group of all races and ethnicities currently earn about 80 cents on the dollar compared to men as a group of all races and ethnicities, according to the Institute for Women’s Policy Research; the wage gap is even wider when black and Hispanic women's wages are compared to white men's wages. Men and women alike have tried to explain the gender wage gap, some going so far as to say  that women are just too timid to get their own raises. The argument that women sabotage themselves either by not being visible enough in the workplace or by simply not asking for a raise has been part of the wage gap narrative for some time—just look at the popularity of Lean In.

However, a recent peer reviewed study conducted by the Harvard Business Review found that this “excuse” for the gender wage gap may be unfounded in our modern age. This study found that while men and women in equal positions asked for raises with about the same frequency, women received raises—after asking for them—much less often than their male counterparts. The study, which surveyed 4,600 men and women from 800 different workplaces, found that 15% of women who asked for a raise received it, while 20% of men got the raise they asked for. 5% might seem like a small number, but over time, that can really add up.

Not only have women been denied raises when they asked for them, they are often told that the reason they don’t get that raise has nothing to do with gender, it’s just that they’re "too quiet." The fact that this idea is still a part of the narrative only serves to downplay other reasons why women might be denied raises, and gaslights women into believing that they are complicit in their own bad fortune.

This argument also plays into the narrative of women as timid worker bees who "don’t have the chops" to become powerful CEOs; it then follows that there are more male CEOs because, well, men are just "more outgoing." It plays into the notion that the female role as caretaker means that they have to take a backseat in the workforce, a notion that has been consistently debunked ever since Betty Friedan published the Feminine Mystique in the 1960s. The notion that “women simply don’t ask for raises” argues that women are more intimidated. They do not want to “rock the boat.” They do not want to make things uncomfortable for those they work with. They would rather toil away, making less money than they are worth, than have one slightly uncomfortable conversation with their superior. The Harvard Business Review study also found that aspect of the narrative to be fundamentally untrue: 14% of both men and women said they wouldn’t pursue a raise because they don’t want to ruffle any feathers, and while that’s not nothing, it’s equal for men and women.

After examining this study, it seems that there are two questions here that need to be addressed. First, if women are asking for raises at the same rate as men, why are men generally more successful? The reasons are likely mulitple and might take a whole other peer-reviewed study to really get to the bottom of, but it might have something to do with the fact that most superiors are still men. Men still sit at the top of the work totem pole, and perhaps they’re just more likely to side with a man. They see someone who looks a bit like them, acts more like them, talks like them, and they want to help them out. In that case, it’s really important that we see actions taken to get rid of gender bias in the workplace. It’s also important to see more women in higher-level roles. Not so that a female CEO can “side with her sisters,” but to bring a female perspective to the bargaining table.

It might also be that men are less likely to respond to a powerful woman. And by powerful, we don’t mean Xena, Warrior Princess; we don’t even mean Meryl Streep in The Devil Wears Prada. We mean just about any woman who decides to open her mouth and argue her position. An article in Business Insider argues that men still have a problem working under a female boss, and a recent article in the Huffington Post tells the story of a man who signed a female name to all his work emails for two weeks and found himself being second-guessed much more often than when he used his male name. This all lends itself to the idea that when a woman walks into her boss’s office, and sits down, explains to him (or her) very calmly that she deserves more money than she is currently making, he looks at her and thinks, "How dare she speak to me like that?"—even if it’s unconscious. Even if it’s under the radar, this bias is something women see regularly when they assert themselves in the workplace, and it might account for that 5% gap in receiving the raise they ask for.

The other question is: why has this idea, that women simply do not ask for raises, been perpetuated? It’s easy to blame men here, but men are not the only people saying this. I’ve seen many women's empowerment books—like Lean In by Sheryl Sandberg; How Women Rise by Sally Helgesen and Marshal Goldsmith; and Women Don’t Ask by Linda Babcock—that rally women to speak up more. They tell women that they’ll never get to the top if they aren’t visible. These authors are trying to help, and maybe they have helped. Maybe these authors are part of the reason why women are speaking up more right now. But while the women and men behind these advice books might mean well, it’s a dangerous line they’re walking. By pinning the problem on women—by telling women they’re too timid and that’s why they’re less successful in the workplace—these authors neglect to address the problem of the gender wage gap head-on. They’re not finding solutions to the problem, they’re just throwing blame around.

There must be another reason why women are less successful at getting the raise they ask for, and that factor is probably not as clear cut as “well, men are just biased.” We need to dig deeper to find a root cause and try to rectify this “raise gap,” and arguing that “women need to speak up more” isn’t doing enough. As long as we’re willing to believe that women bear much of the responsibility when it comes to the gender wage gap, we’re gaslighting them into believing that this problem is at least partially their fault. By allowing this excuse, even as it continues to be proven false, to linger in the minds of HR heads, executives, and young women, we are neglecting to look for the real cause as to why women are not getting raises at the same rate as men. We are neglecting to examine whole-heartedly the problem ofthe gender wage gap, and so we are allowing it to linger well past a time when it simply shouldn’t exist.