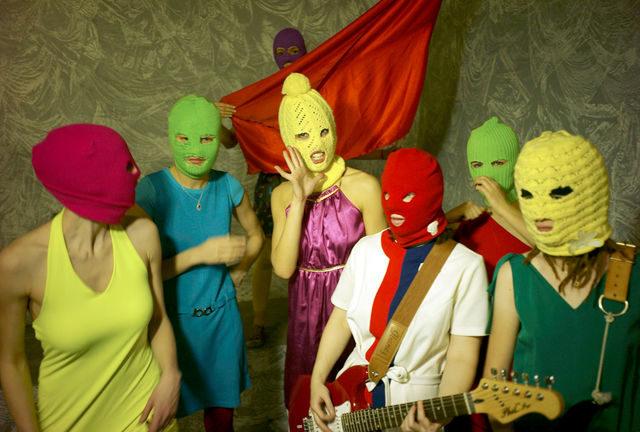 Pussy Riot has landed in jail once again, on the same day they were set to be released following their anti-authoritarian protest at the World Cup. Four members of the punk-protest group were arrested after they ran onto the Moscow World Cup field, dressed in police uniforms, to demand an end to Russia’s oppressive police practices. Millions were watching. Olga Pakhtusova, Pytor Verzilov, Olga Kuracheva, and Veronika “Nika” Nikulshina were sentenced to 15 days in jail for disrupting the game. But it seems that Russia’s (in)justice system, infamous for jailing political dissenters, has found a way to extend their stay.

According to a statement on Pussy Riot's Facebook page, the four dissenters have been sentenced to another ten days in jail for “the organization and holding of public events without prior written notice.” Yeah, sounds fake.

This maneuver to keep Pussy Riot in jail is all the more ironic and horrifying, considering that the group’s protest was about Russia’s unjust policing and jailing practices in the first place—and considering that two members of Pussy Riot, Nadya Tolokno and Maria Alyokhina, were imprisoned for almost two years after performing an anti-Putin protest at a Moscow cathedral in 2012. (One of the members currently imprisoned, Pytor Verzilov, is Tolokno's husband.) Since the World Cup arrest, Pussy Riot has released multiple statements and music videos calling for police to stop arresting people for protests, and for the release of political prisoners. 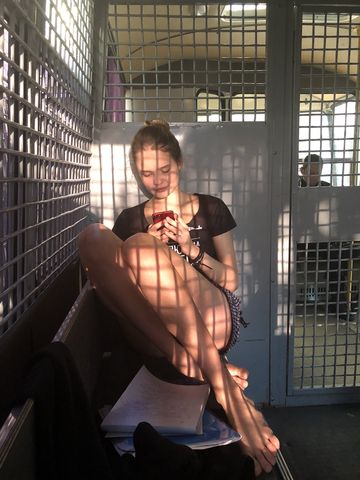 A Pussy Riot member waits in jail for trial. Image from Twitter.

The music video “КОШМАРЫ/NIGHTMARES” called for the release of Oleg Sentsov, a Ukrainian filmmaker arrested for his activism against the Russian “annexation” (AKA takeover) of Crimea. Sentsov, who is being held in a maximum-security prison above the Arctic Circle, has been on a hunger strike for two and a half months. Pussy Riot also showed support for Anya Pavlikova, an 18-year-old who was arrested for participating in a group chat that was critical of Putin.

According to a post on Pussy Riot’s Facebook page, the chat was also used to discuss boys and schoolwork, and the friends would meet up at McDonald’s to talk about their lives. But the chat was infiltrated by the Russian secret service. Its members were arrested, and the chat app itself, Telegram, has been banned. Pussy Riot released the music video “ЕДИНОРОГ/UNICORN FREEDOM” to demand Anya’s release.

According to their Facebook page, as they are jailed once more, Pussy Riot sings “songs about freedom.” We are singing with you. 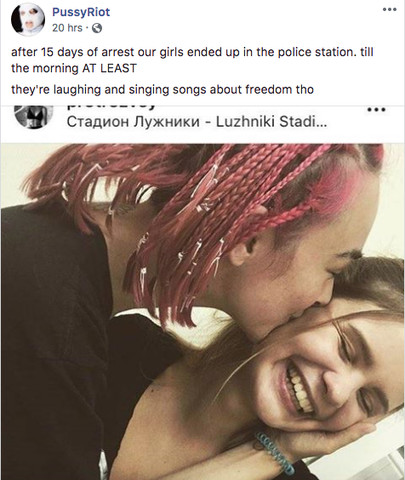