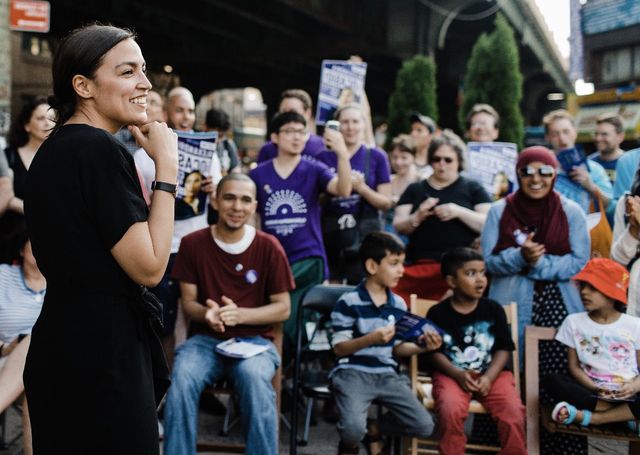 This weekend, Republican Florida Representative Ron DeSantis referred to Democratic congressional nominee Alexandria Ocasio-Cortez as “this girl…or whatever she is” during a campaign event. Yesterday, Ocasio-Cortez directly responded to DeSantis on Twitter. “It seems you’re confused as to ‘whatever I am.’ I am a Puerto Rican woman,” she wrote. “It’s strange you don’t know what that is, given that ~75,000 Puerto Ricans have relocated to Florida in the 10 mos since Maria.” Read more on the Huffington Post.

The actor and playwright announced on Sunday that he has helped kickstart a multimillion-dollar fund to help the Puerto Rican arts community as the island continues to recover from Hurricane Maria. Recipients of the fund will include museums, art education programs, and local theater companies. Miranda said that when Hamilton comes to Puerto Rico in January, he will donate all proceeds to the fund. “The goal wasn’t just artistic satisfaction, but how can we leave Puerto Rico a little better than we found it,” he said. Read more from The Associated Press.

In an undated interview that resurfaced online last week, radio and TV personality Charlamagne tha God admitted to raping his wife in the past. “It’s a lot of things guys did especially when we were young that were rape that we just didn’t consider rape,” he said, going on to describe how the first time he slept with his wife, she was drunk and passed out. “I asked her yesterday, ‘Yo, did I rape you the first time we ever had sex?’ And she goes, ‘I mean, in hindsight, yeah.’” Charlamagne addressed the clip this morning on The Breakfast Club, and backtracked, explaining that he and his wife had since decided the incident wasn’t rape. You can hear Charlamagne’s full statements via links on The Grapevine.

Parolee John Cowell was arrested yesterday for violently attacking two young black women on Bay Area Rapid Transit in Oakland, C.A., leaving one of them, 18-year-old Nia Wilson, dead. Though detectives have not yet found evidence linking Cowell with a white supremacist group, BART Police Chief Carlos Rojas said that his team is investigating the possibility, especially since a group of white supremacists had been attempting to gather at an Oakland bar that evening. Read the full story in The L.A. Times.

Support For Roe v. Wade Is Higher Than It Ever Has Been

Though we’re all terrified about the future of Roe, especially following Brett Kavanaugh’s Supreme Court nomination, pro-choice support is at an all-time high, according to a recent poll from NBC News and The Wall Street Journal. NBC reported that 71% of American voters believe the ruling supporting legal abortions should not be overturned, with only 23% passionate about its reversal. Even among registered Republicans, 52% said that they believed in maintaining the decision. Read NBC’s full report here.

Yesterday, in a preemptive action to protect women in the case of Roe v. Wade’s reversal, Massachusetts passed a bill, titled the NASTY Women Act (Negating Archaic Statutes Targeting Young Women), that will repeal a 173-year-old law against “procuring a miscarriage.” State Senate President Harriette Chandler said that lawmakers have wanted to overturn this legislation for years, but it wasn’t a priority while Anthony Kennedy was still on the Supreme Court. “These are strange times we live in. Nothing is impossible, and we’ve got to have a ‘plan B,’” Chandler toldTIME. Read TIME’s full coverage here.

Daniel Pantaleo, the NYPD officer who choked Eric Garner to death in 2014, will finally face consequences four years later. A spokesman for the police department announced that departmental charges have been filed against both Pantaleo and Sgt. Kizzy Adonis, one of the first officers to respond. The case will be prosecuted by the Civilian Complaint Review Board in 2019. Read more on CNN.

In a piece published yesterday, OUT highlighted how American soldiers who are currently non-deployable due to their HIV status could be discriminated against even further because of a new Department of Defense policy pushing military branches to separate non-deployable members. Read the story on OUT.

Over 950 Amazon workers in Madrid participated in a strike against the company last week, demanding better working conditions. At an Amazon fulfillment center in the city, 120 people gathered to protest—but the peaceful event quickly turned violent when Spanish police officers showed up to forcibly remove and push the protestors. One individual needed eight stitches after an officer hit him with a baton. Read the full report on BuzzFeed News.

118,000 individuals and counting have signed a Change.org petition pushing Netflix not to release the forthcoming “dark comedy” show Insatiable which, in its trailer, features Debby Ryan in a fatsuit and generally promotes toxic fat-shaming. “For so long, the narrative has told women and young impressionable girls that in order to be popular, have friends, to be desirable for the male gaze, and to some extent be a worthy human, that we must be thin,” wrote Florence Given, who started the petition. You can read more—and sign—here.

Tags: Alexandria Ocasio-Cortez , Ron DeSantis , Lin-Manuel Miranda , Charlamagne tha God , Roe v. Wade , Massachusetts , Eric Garner , Amazon protests , Insatiable , Netflix
Support Feminist Media!
During these troubling political times, independent feminist media is more vital than ever. If our bold, uncensored reporting on women’s issues is important to you, please consider making a donation of $5, $25, $50, or whatever you can afford, to protect and sustain BUST.com.
Thanks so much—we can’t spell BUST without U.