Why Are We So Awful to Female Historians?

Recently, there has been a spate of female history experts being undermined.

First, history nerd and curator extraordinaire Helen Antrobus appeared on BBC’s Who Do You Think You Are. She was there to talk about suffrage, and she did her job perfectly, explaining the suffrage movement and the 1911 census boycott in an enthusiastic, knowledgeable and understandable way. So of course, after doing her job so well, the comments rolled in:

*By the way because I'm nice I've removed these people's usernames.

Antrobus immediately shut this down and wrote a quick reminder that she was there to chat about an era of history that she is an expert in, which seemed to have been forgotten… 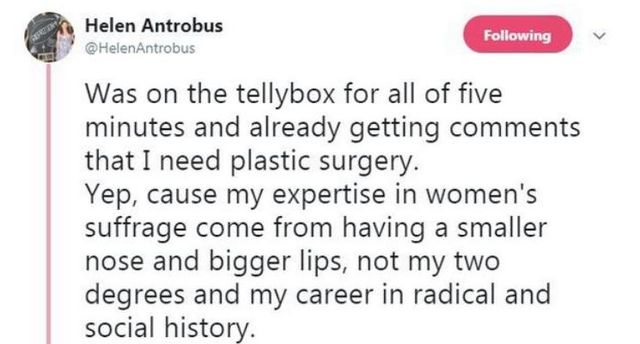 But of course, Antrobus is not the only woman who has had to fight to be recognized for her history expertise.

The very talented historian Fern Riddell was also undermined after a fellow historian "skimmed" her recent book on suffragette Kitty Marion and felt she had put emotion over fact, which he believed was indicative of the clear "gendered methods" between male and female historians. 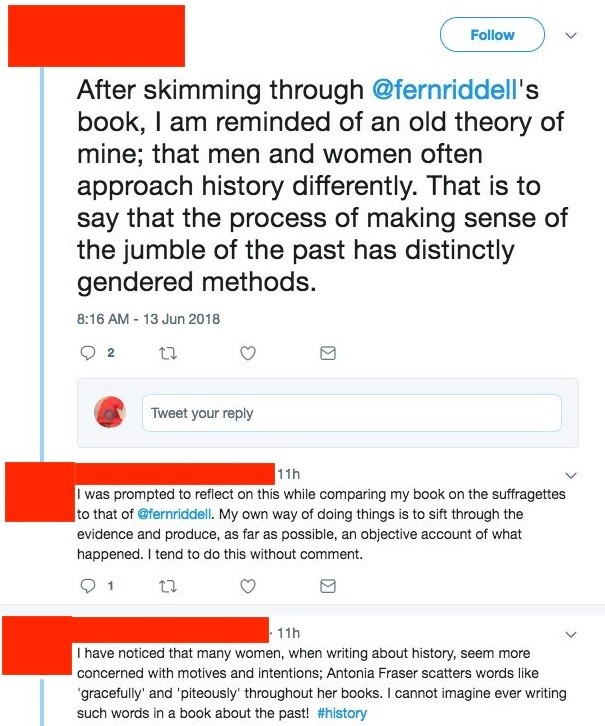 This of course quickly descended into people tearing apart Riddell's career, expertise and questioning whether she truly had the PHD she "claimed" to have. Just like Antrobus, Riddell immediately clapped back:

Both women were immediately joined by many others supporting them and both proved themselves to be brave as well as more than capable of rising above the bullshit that was thrown at them. That is a really great skill to have, because right now:

They are going to get this for the rest of their careers.

If you are a woman in a public facing history role, then chances are you have had your entire worth questioned over:

This is not just in the dark corners of the internet. It is also seen in male-only history panels, and in the disparity in pay which is very much still prevalent. In addition, female history experts on TV are given way more stipulations over what they wear than their male counterparts.

Highly intelligent women are being stripped of their passion, knowledge and hard work and simply boiled down to their looks and perceived lack of educational legitimacy.

I think we can all agree that this is bullshit of the highest order.

To change this for good, we all need to work together. Take the amazing new initiative in America, Women Also Know History. The project was started by female history experts to promote women working in history and make it easy for people to find a female expert, thus hoping to end the all-male panels and talks with the lame excuse that nobody could find a relevant female expert. Here they are for you! Projects like this are incredible and they are changing the historical landscape for good. But these projects are also really rare, because it takes everyone putting aside differences to work together as one. A united front. Differences aside, grudges on the back burner, judgement not welcome. It is a big ask. But it’s the only way to make meaningful change.

So, here are three small ways we can start uniting as a community.

1. Stop tearing each other apart

In general, history is a wonderful supportive place to be, full of hybrid Hufflepuffs and Ravenclaws; it is truly a beautiful thing. BUT the stakes in history can be high because it is often not just years of work at stake, but livelihoods too. So, it is understandable then, that when people feel they have been overlooked, belittled or smeared that they lash out. But no matter how cathartic it may be, it is doing SO MUCH HARM.

Whether it is bitching to a friend that someone only got a TV gig because they can "bat their eyes for the camera," rolling your eyes and undermining someone researching the same era as you, or even going so far as to tell people to straight up never work with someone—it is hurting not just that person, but you too.

In a field where women already have to work twice as hard for fewer chances at jobs, we need more of us, not less. Putting each other down does not do anything other than create less opportunity and make it ok for other people to bash women in history.

If you do not agree with someone’s research conclusions or have an issue with something they have said or done, then talk to them.
And I do not mean by @ing them in a public message. Slide on into those DMs or send an email and create a meaningful conversation. Because if you have written a 15,000 word dissertation, a 30,000 word thesis or a 60,000 word book, then I believe in your ability to write a 50-word email.

And do not just stop at that little email! Get on social media and discover new people, new work and new ways of telling history. Find things you like and things you do not. Expand your personal bubble and say hi to people and start conversations with history experts and history lovers both big and small. You will be not only creating your own positive community, but also inadvertently building bonds and bridges outside your personal circle.

Yes. I know. It is cheesy. But it is true. It does not have to be big, it can be small and take next to no effort! Start by doing more to celebrate the achievements of others in your field. Recommend their latest book, retweet their project, just tell people about the cool stuff they are up to. Spreading each other’s work makes everyone more visible.

But most of all, do not forget to leave the door open for the people behind you. Campsite rules, people. Leave things in a better state than you found them. That means working to make it easier for others to work in history. So, say no when everyone on a history panel is a white middle-aged man. Stand with your colleagues when they need support. Check in and make sure people are ok when they are getting battered with abuse.

Make more opportunities for people just starting out. Just because you got in by one route does not mean that everyone else can or should. PhDs are great, but not everyone has one or the ability and privilege to be able to do one. Unpaid internships and apprenticeships were once the only road, but relying on them has meant we are losing so many amazing voices.