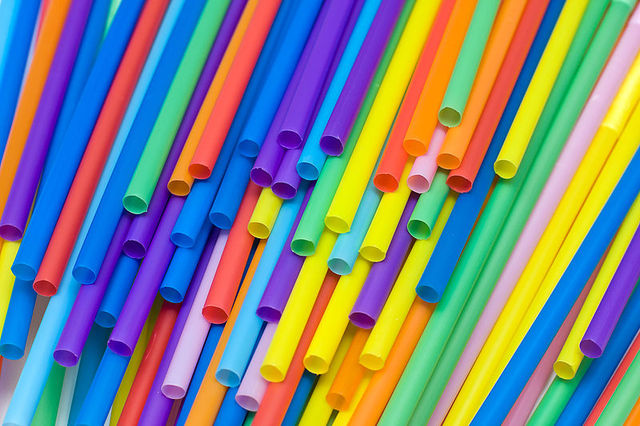 People with disabilities are responding to the recent series of plastic straw bans by cities like Seattle and Berkeley and companies like Starbucks and Marriott. In the process of striving to reduce plastic waste and make the oceans safer for sea animals, these governments and companies have failed to understand how important plastic straws can be for people with disabilities. One Twitter user, who has Tourette's syndrome and a bleeding disorder, explains the importance of straws in their life: 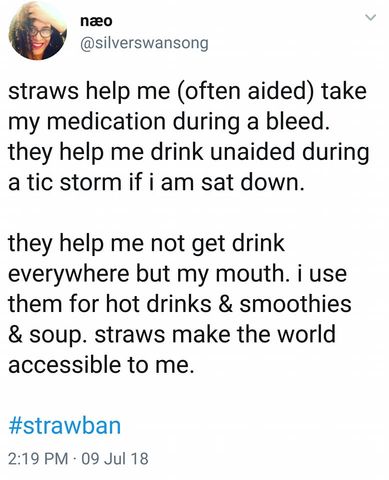 Many disabled folks took to Twitter to share similar experiences. Environmental activists were quick to respond to the tweets with questions like, “Can’t you use reusable straws that aren’t made from plastic?” But that’s not a good solution—for people with certain disabilities, straws need to be flexible, soft enough to reduce risk of injury, sterile, and disposable. This chart, by Twitter user @sarahbreannep, helps sort out the problems with various plastic straw alternatives: 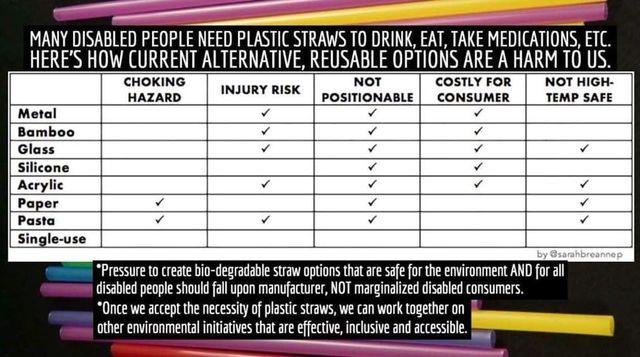 Some medical professionals have jumped in to agree that an all-out ban on plastic straws would be harmful to people’s health. In hospitals, plastic straws are vital to making sure people with diseases and disabilities can take their medications and get the hydration and nutrients they need. And it’s important that the straws are single use, sterile, and, yes, disposable, so as not to spread disease.

“What about biodegradable plastic straws?” ask environmentalists. Well, turns out so-called “biodegradable” single use plastics aren’t a solution either—they need VERY particular conditions in order to actually break down. Anybody know of an oxygen-free room where I could keep a pile of straws for ten days at 120 degrees Fahrenheit? Me neither. Most communities don’t have the necessary facilities to get these “biodegradable” plastics to live up to their name, and that means they just end up in the ocean anyway. The fact that they're labelled “biodegradable” at all is basically a marketing scheme—companies know that people care about the environment, and, rather than actually taking any action to help the environment, they use the idea of being planet-friendly to sell products. (More on corporate shittiness below).

“Wait, but can’t you just stock up on like a million plastic straws before the bans are enacted and bring them with you everywhere you go from now on and for the rest of your life?” some environmental activists have asked. To which people with disabilities have responded, "Um….No. Are you kidding right now?" 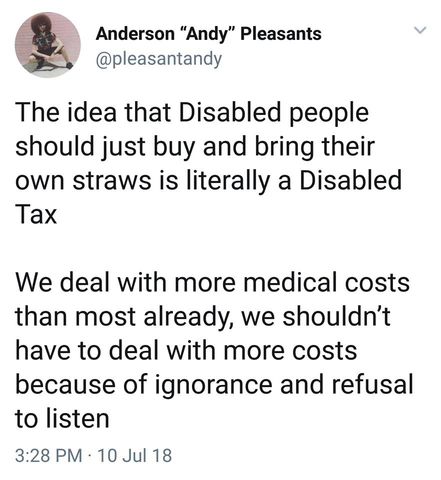 The debate about plastic straw bans is a window to about what environmentalism currently looks like in our country: what are we willing to change? Who is willing to take responsibility? Who do we take into account when we search for solutions, and who do we push to the side? 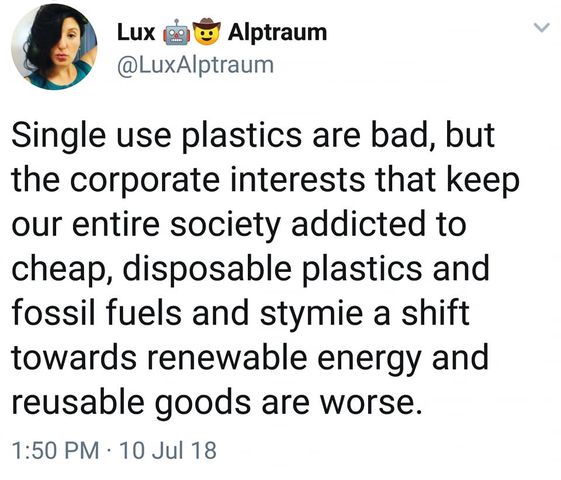 Currently, our environmental activism focuses on individual responsibility and choices. It’s like “Only YOU can prevent forest fires,” except it’s “only YOU can stop sea turtles from being killed by ocean plastic.” But here’s the thing: studies show that’s not true.

New research on the Great Pacific Garbage Patch (which you should check out on Google images—you’ll have nightmares, but this is really important, y’all) shows that 46% of this floating island of horrors is made of commercial fishing gear. We all know how harmful those plastic six-pack rings are. Now imagine a massive version of that. Okay, now imagine a couple hundred thousand of those tangled together in the ocean, and you’ve got an idea of the problem with abandoned plastic fishing nets. Yeah. That’s real bad for wildlife, and the numbers are way higher than researchers expected. (Another surprise to researchers was the actual size of the patch—it’s 16 times larger than they thought).

What does this mean? Basically, if we could eliminate all plastic straws, it would only take care of a small percentage of the garbage in the ocean. It was previously thought that plastic straws were a much larger part of the problem. For years, news outlets including The New York Times and National Geographic have reported that Americans use 500 million plastic straws a day. But after researchers did some digging, they found out that that stat isn’t supported by data, and in fact, that it originally came from a phone survey conducted by a nine-year-old. (No shade to that kid! We just need to look at the evidence.) This doesn't mean there's no use in efforts to cut down on individual plastic use. But this focus on individual consumer habits is distracting from the much bigger picture. It’s industries who are largely responsible for polluting our oceans (just like they’re polluting our air). We need to hold them accountable. 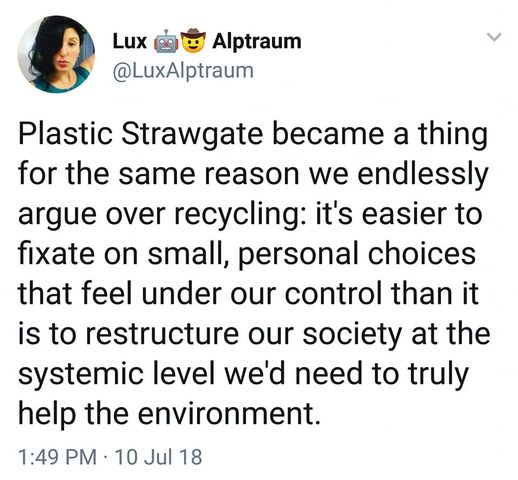 When we make saving the environment about individual consumers, it’s really convenient for corporations, who just continue to profit off destroying our environment. And marginalized people are always hit the hardest—check out this video about environmental racism:

So are corporations working to heal the harm they cause, which is like a million times greater than any individual could create in multiple lifetimes? I’m gonna give that a really loud NOPE. But they can: experts say we can fix the problem of commercial fishing ocean plastic, so long as industries take responsibility for their actions. And y’all—we know they have the money to do it.

Anyway, back to the straw thing. Some people with disabilities need straws, and while it’s vital that we take action to heal our environment, people need to stop shaming them for that. Just stop. And believe people when they tell you what they need. 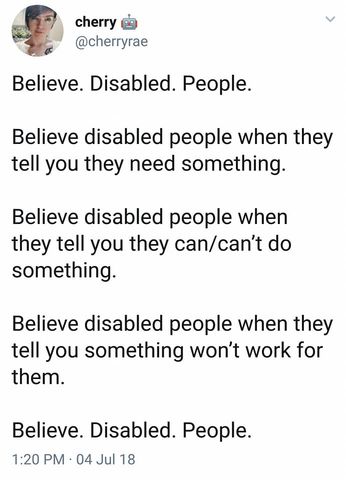 This is not to say that there's no value in reducing one's plastic use, or in companies and governments taking action on these issues. Anything that we can do to help the environment, we should! But we shouldn't focus so much on individual use that we let corporations off the hook. And we really shouldn't make policies that hurt people with disabilities.

The debate about plastic straw bans is a reminder that, like all forms of social justice, our environmentalism must be intersectional. Taking action to reduce waste is awesome. But we can do this right—introducing policies that are more flexible than an all-out ban. Let's make environmental policies that are inclusive and allow people of all different abilities to access what they need. And then let’s destroy the capitalist system that’s profiting off polluting our planet. 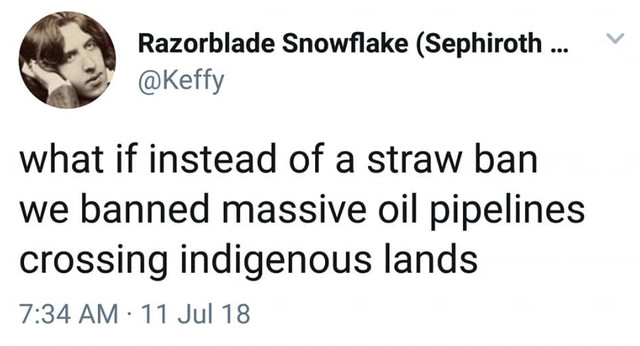 This Art Showcase Is Displaying The Intersectionality Of Identity

Tags: disability , disabilities , straws , straw ban , pollution , environmentalism
Support Feminist Media!
During these troubling political times, independent feminist media is more vital than ever. If our bold, uncensored reporting on women’s issues is important to you, please consider making a donation of $5, $25, $50, or whatever you can afford, to protect and sustain BUST.com.
Thanks so much—we can’t spell BUST without U.