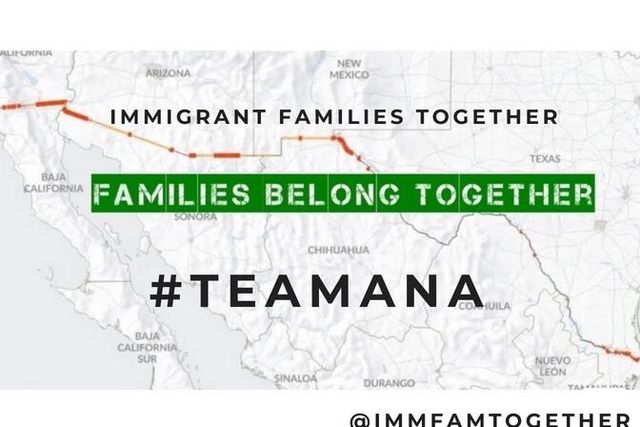 Ana is currently being held in an ICE facility in Arizona after being separated from her child. Between her bond, transportation to the state where Ana's child is being held, accomodations, legal appointments, and more, it will cost about $25,000 for Ana to reunite with her child.

Immigrant Families Together is raising the money on GoFundMe to help reunite Ana and her child—Ana is the tenth mother they've done this for. The group is a network of Americans committed to the unification of families separated by the Trump Administration’s “zero-tolerance policy," working, as they put it, "one mom at a time." The group fights family separation by raising bonds to support the release of migrant parents from detainment centers, organizing transportation and housing for them, and connecting parents with further resources. The funds go to meet costs related to release, relocation, court preparations and legal representation, as well as other incuring expenses. Immigrant Families Together is entirely made up of volunteers, with 100% of funds going directly to the parents and children who have been separated.

Among the women the movement has been succesful in raising funds for is Yeni González, a Guatemalan migrant whose three children—sons Deyuin, 6 and Lester, 11, and daughter Jamelin, 9—were taken from her after the family crossed the U.S. border. After the family was collectively placed in an Arizona detention center, agents woke up the family one morning at 5am and took the children to a shelter in New York. Thanks to crowdfunding by Immigrant Families Together, González was able to travel across the country—driving by volunteer-powered caravan, as her identification had been confiscated an she couldn't fly—and see her children after five weeks apart, as publicized by The New York Times earlier this month. Costs to cover González's bond alone amounted to $7,500, while crowdfunding efforts for other women are working towards goals of $30,000 to meet the financial demands of reuniting families.

You can support mothers in need and learn more about Help Immigrant Families Together by visiting immigrantfamiliestogether.org.

Separated Migrant Families Are Finally Being Reunited--But Some Toddlers No Longer Recognize Their Parents: Link Roundup

Tags: Immigrant Families Together , one mom at a time , immigration rights , families belong together
Support Feminist Media!
During these troubling political times, independent feminist media is more vital than ever. If our bold, uncensored reporting on women’s issues is important to you, please consider making a donation of $5, $25, $50, or whatever you can afford, to protect and sustain BUST.com.
Thanks so much—we can’t spell BUST without U.