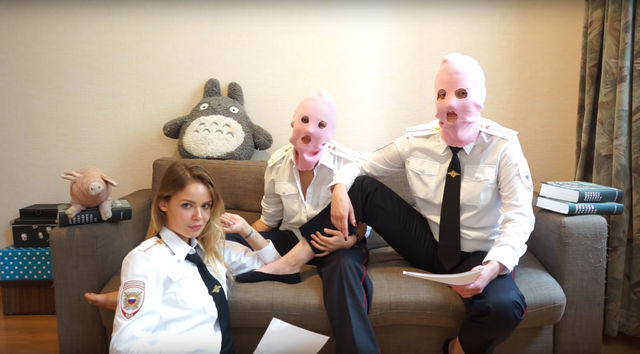 The World Cup finale took place in Moscow last night with hundreds of millions of viewers in attendance, including Russian President Vladimir Putin—which Pussy Riot saw as an excellent audience for their newest performance piece called “Policeman Enters The Game.” According to the BBC, four members of Pussy Riot, a Russian activist group of punk performance artists, have been arrested for disrupting the World Cup by running onto the pitch in a protest against human rights abuses. They are being accused of violating the rules for spectators at a sporting event, and for illegally wearing police uniforms.

The four activists stormed the field wearing police uniforms and were dragged off by Russian police. One of them managed to high-five French star Kylian Mbappé before being taken off. The group consisted of three women and one man. The three women have been identified as Veronica Nikulshina, Olga Kurachyova and Olga Pakhtusova. The man was identified as Pyotr Verilov,the husband of Pussy Riot member Nadya Tolokonnikova, who was one of the Pussy Riot members jailed after perfoming a protest piece at Moscow Cathedral of Christ the Savior in 2012.

In a Facebook post taking credit for the World Cup disruption, Pussy Riot explains that is has been 11 years since the death of Russian poet and political dissident Dmitriy Prigov, who created the image of “the heavenly policeman” in Russian culture. The post says, “The heavenly policeman rises as an example of the nationhood, the earthly policeman hurts everyone.” The post also lists their demands:

2. Not imprison for “likes”

4. Allow political competition in the country.

5. Not fabricate criminal accusations and not keep people in jails for no reason

Pussy Riot running on the World Cup pitch from their Instagram

Their court proceedings are taking place today. So far, according to Pussy Riot’s Twitter, Veronica Nikulshina, Olga Kurachova, and Pyotr Verzilov have each been charged with 15 days of administrative arrest in a special prison and have been banned from attending sports events for three years. According to ArtNet, in a recording of their interrogation from last night, one of the Russian officers is heard saying that he wishes it were still 1937—alluding to the Stalin era when dissenters were routinely rounded up and killed in an effort referred to as Great Purge to rid society of opposition.

Formed in 2011, Pussy Riot have held performance art pieces at various landmarks in Russia such as Red Square and Christ the Savoir Cathedral. For each performance, they play instruments and yell out feminist and anti-Putin lyrics. Their most famous piece was “Performance No. 5: A Punk Prayer,” which ended in the infamous arrests of three of their members, including Nadya Tolokonnikova. 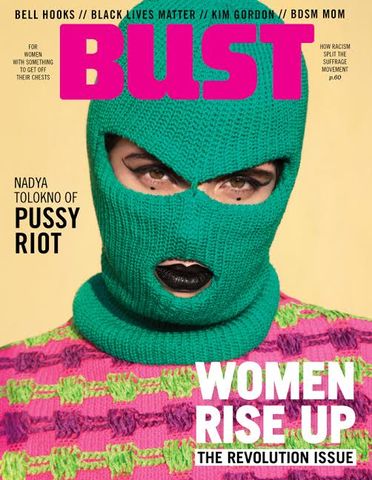 Nadya on the cover of BUST

Imprisoning Pussy Riot created even more of a movement, and turned them into worldwide celebrities. In the HBO documentary Pussy Riot: A Punk Prayer, their lawyer said that having them in prison only increased the protests that were happening outside. They were in prison for almost two years and got right back into their activist work after being released.

In 2016, Nadya released three anti-Trump music videos the week before the U.S. election. In an interview with NPR, she said that even though she could not vote in this election, she felt it was important to speak out because, “American politics influence world politics. In a lot of ways, the US really interferes with other countries politics.”

Many artists and activists wrote letters to Pussy Riot when they were in prison, which were later published in a book entitled Pussy Riot!: A Punk Prayer for Freedom. One of the letter is from Yoko Ono that says, “You have won for all of us, the women of the world.”

Pussy Riot has won the World Cup for all of us, the women of the world!

Pussy Riot's Nady On How To Resist Trump