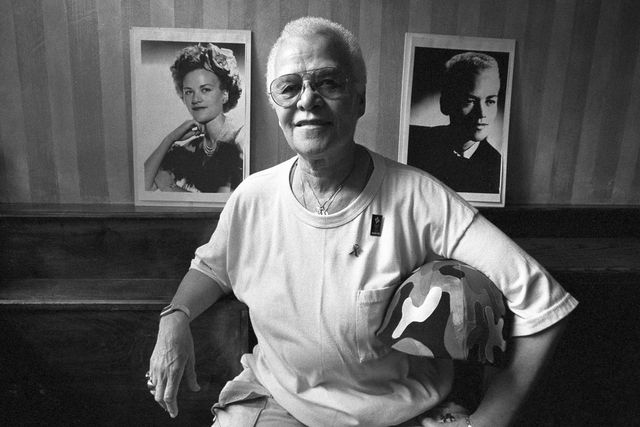 Althought it is no longer Pride month, it is always a good time to champions of LGBTQIA+ rights—so we're today we're telling the story of a stone cold butch babe, Stormé DeLarverie. 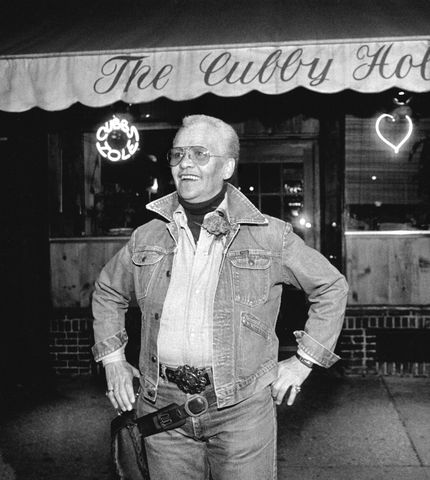 Stormé was sometimes known in LGBTQ circles as the "Lesbian Rosa Parks." She fought against "ugly" (her term for bigotry and hatred) for her entire life and always looked out for others.

Stormé was born in New Orleans in 1920. Her mother was an African American servant and her father was the head of the white family her mother worked for. Her parents eventually married and moved to California.

A) that she was a lesbian

During the 1940s, Stormé toured with a jazz trio as the singer. She started performing in drag around this time and made quite a name for herself as an accomplished drag king in queer cabaret circles.

She also performed as part of the Jewel Box Review, a drag cabaret, which featured drag queens, and one drag king—our gal Stormé. Stormé spent the rest of the 1950s and '60s crooning jazz numbers to enthusiastic queer crowds. 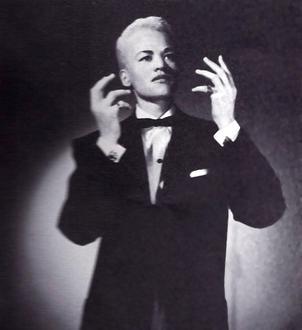 Then things started to get real rough for Stormé. You see, in the late '60s, there was a relentless police campaign against queer hotspots in New York City, and tensions were at an all-time high.

On June 29, 1969, Stormé was hanging out near the Stonewall Inn in Manhattan, having recently come back from touring with the Jewel Box. She was having a wonderful time, drinking and socializing with her mates.

Suddenly, police descended on the Stonewall Inn. They forced their way into the bar at around 1:20 a.m. and started forcefully dragging patrons outside. The police molested and beat up the patrons, many of whom resisted arrest and refused to show identification (cross-dressing was illegal then).

Stormé saw one of her friends being assaulted by police. She was not having it. She fought back and threw a punch at one of the policemen after he assaulted her.

Stormé was then handcuffed and thrown into the back of a police van, but she kept escaping amidst the chaos. She complained that her handcuffs were too tight, and she was beaten about the head with a baton.

Bleeding and being dragged back to the police van again, Stormé addressed the growing crowd directly: "Why don't you do something?"

The crowds outside started to fight back against the police, and shit kicked off! Now, Stormé is credited as a leader of the Stonewall rebellion, along with Marsha P. Johnson and Sylvia Rivera.

"It was a rebellion, it was an uprising, it was a civil rights disobedience—it wasn't no damn riot."

Don’t forget Stormé was nearly 50 when she fought back against the police. She was known for being lovely, but tough as fucking nails.

Truly, Stormé is the baddest of all bad bitches.

After Stonewall, Stormé was an important member of the SVA, The Stonewall Veterans Association. She was a key figure in New York Pride, often appearing with her car, which was well known for being parked outside the gay bars in Greenwich Village and was actually outside Stonewall Inn the night of the riots.

She settled in Brooklyn, New York in her later years, giving up touring. She promptly appointed herself protector of lesbians within Greenwich Village in NYC. Stormé would patrol round the local LGBT hot spots checking everyone was okay. She did this well into her 80s.

She was a much loved and familiar face as a bouncer to local gay clubs. She greeted everyone with "Hey babies" or "Hey love" and always encouraged everyone to get home safe. Stormé was full of love for her community.

She is the best.

Stormé passed away in 2014 at the grand old age of 93, and was an inspiration to so many people, myself very much included, showing us that displaying kindness didn’t mean you couldn’t be tough and fight for what you believed in.

That was interesting, where can I find out more? Well, there’s a short documentary on Stormé called Stormé: Lady of the Jewel Box and you can see it on YouTube! It’s about her time working on the Jewel Box Revue and also shows her working as a bouncer in the '80s.

In Defense of Pop Culture Adaptations Of History

Tags: Storme Delarverie , queer , pride
Support Feminist Media!
During these troubling political times, independent feminist media is more vital than ever. If our bold, uncensored reporting on women’s issues is important to you, please consider making a donation of $5, $25, $50, or whatever you can afford, to protect and sustain BUST.com.
Thanks so much—we can’t spell BUST without U.