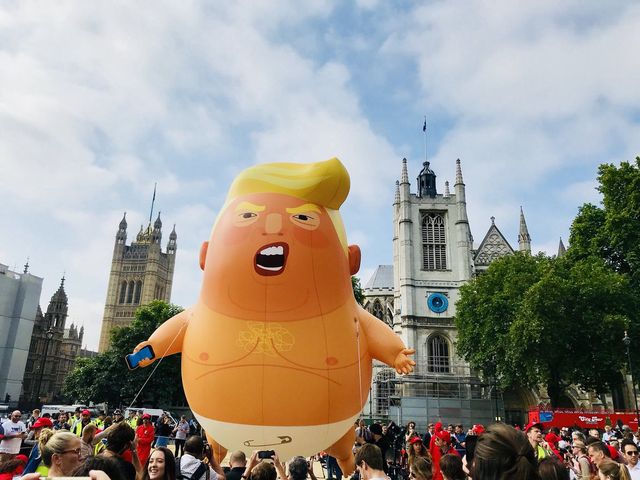 Trump is in the U.K., and tens of thousands of Britons are expected to protest against him at London’s Trafalgar Square in what is predicted to be one of the largest protests London has seen since 2003 during the Iraq War, reports CBS News. London’s mayor Sadiq Khan even allowed the “Trump baby” balloon to fly over Parliament Square. Read more at CBS News.

After criticizing U.K. Prime Minister Theresa May over Brexit, Trump continued his display of idiocy in the U.K., giving a cringe-worthy press conference full of comments about how he thinks immigrants are negatively "changing the culture" of Europe and how he is “doing a great job.” Fantastic! Read more at Splinter News.

Representative Robert Aderhold from Alabama created an amendment to a funding bill for the Departments of Health, Labor and Education that would ensure funding for adoption agencies that discriminate against LGBTQ parents looking to adopt, NBC News reports. Nancy Pelosi called the amendment a “sickening new low” for Republicans. Read more at NBC News.

Celebs from Terry Crews to Rose McGowan signed a petition to tell cyberbullies to stop criticizing Asia Argento for her boyfriend Anthony Bourdain’s death, Jezebel reports. The stars write that they “reject that narrative” of “blaming, vilifying, and martyring courageous women.” Read more at Jezebel.

The man who verbally abused a woman for wearing a Puerto Rico shirt in a park has been charged with a felony hate crime, Buzzfeed News reports. In a now viral video, the man can be seen telling the woman that she should not be wearing her shirt in the U.S. and demanding if she was a citizen. The police officer who was at the scene and ignored the woman’s pleas for help has resigned. Read more at BuzzFeed News.

Tags: Trump , U.K. , Theresa May , immigration , Puerto Rico , LGBTQ
Support Feminist Media!
During these troubling political times, independent feminist media is more vital than ever. If our bold, uncensored reporting on women’s issues is important to you, please consider making a donation of $5, $25, $50, or whatever you can afford, to protect and sustain BUST.com.
Thanks so much—we can’t spell BUST without U.