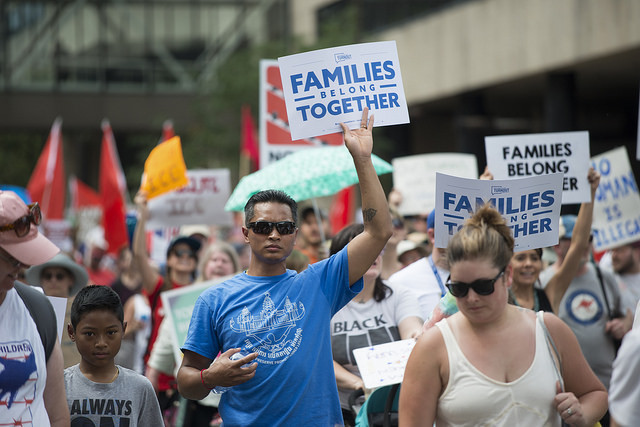 A number of migrant children under the age of five were reunited with their parents after forced separation as part of a court order on Tuesday in Phoenix, but the reunions happened amid confusion as some children failed to recognize their parents. Children also expressed attachment to social workers who overseed them during the separation and referred to other children held in detention as siblings, the New York Times reports.

The federal government reopened its investigation into the 1955 killing of 14-year-old Emmett Till, whose Mississippi murder stands as a brutal example of racial violence in America. Details at The New York Times.

Stormy Daniels was arrested Thursday at an Ohio strip club for allegedly touching three undercover detectives. Daniels’ lawyer Michael Avenatti called the arrest a politically motivated setup and tweeted that he and his clients will fight the charges, CNN reports.

Principal flutist Elizabeth Rowe filed a lawsuit Monday against the Boston Symphony Orchestra on the grounds she is earning substantially less annually than the principal male musician of the orchestra, the peer closest in standing to her, NPR reports.

Papa John’s Founder Resigns After Use of Racial Slur

Papa John’s founder John Schnatter resigned from the pizza chain after using the N-word during a conference call earlier this summer, an incident publicized in a Forbes magazine article. Read more on CNBC.

Shereen Hariri says Duran Duran frontman Simon Le Bon groped her while signing autographs at the record store she worked at in 1995. Le Bon took to the band’s Facebook page to call the statement “simply untrue” after pulling out of a private meeting with Hariri. See The Guardian for details.

In an interview with the Hollywood Foreign Press Association, actress Mira Sorvino shared an experience of sexual assault that occurred at age 16 in which an unnamed casting director gagged her with a condom, apparently in preparation for a horror movie role. Read more at People.

When asked by GQ Australia whether the #MeToo movement had made him question his behaviour towards women, Superman actor Henry Cavill made some remarks including, “there’s something wonderful about a man chasing a woman...It’s very difficult to do that if there are certain rules in place. Because then it’s like: Well, I don’t want to go up and talk to her, because I’m going to be called a rapist or something.” See NME for details.

With "This Is America," Donald Glover Forgets Black Women--Again

Tags: families belong together , news , link roundup , ICE , immigration , immigrant rights , #MeToo , Mira Sorvino , Kavanaugh , Roe V Wade , Emmet Till
Support Feminist Media!
During these troubling political times, independent feminist media is more vital than ever. If our bold, uncensored reporting on women’s issues is important to you, please consider making a donation of $5, $25, $50, or whatever you can afford, to protect and sustain BUST.com.
Thanks so much—we can’t spell BUST without U.