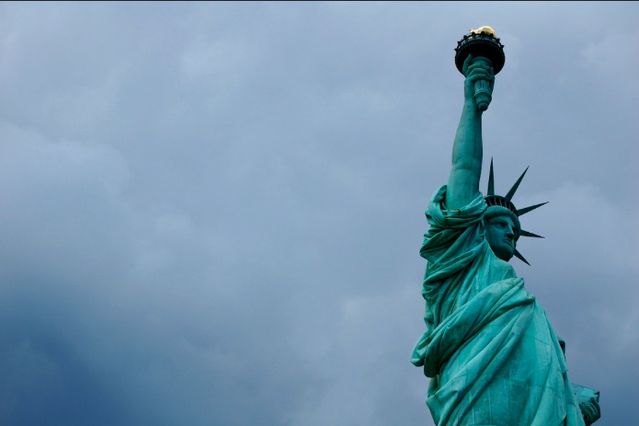 Between children representing themselves in court and Trump’s creepy qualifications for a Supreme Court justice nominee, it’s been hard to feel patriotic this year. But one woman, Therese Patricia Okoumou of Staten Island and the New York-based direct action group Rise and Resist, made us all proud this holiday by scaling the base of the Statue of Library in protest against current immigration policies and the Trump Administration. Okoumou was arrested for trespassing and pleaded not guilty yesterday in federal court. “Michelle Obama said when they go low, we go high,” Okoumou said, as reported in The New York Times. “I went as high as I could.”

Read the NYT’s coverage here, and look out for updates on how to support Okoumou and how to resist white supremacy and abolish ICE on Rise and Resist’s Twitter.

Chris Brown, a serial abuser and stalker, has once again been arrested for assault-related charges in West Palm Beach, F.L. immediately following a concert. He was released on bond shortly after. The exact incident calling for his arrest is not yet known, but you can read more on CBS News.

Ireland Will Hold Referendum About “Women’s Life Within The Home”

A current clause in Ireland’s constitution states that “by her life within the home, woman gives to the state a support without which the common good cannot be achieved” – and in another, the constitution states that measures must be taken to “ensure that mothers shall not be oliged by economic necessity to engage in labour to the neglect of their duties in the home.” Ireland’s government passed a motion to delete the clauses, and Justice Minister Charlie Flanagan said that he hoped the erasure would promise women “real choices about what to do with their lives.” Read more in The Telegraph.

At a campaign rally last night in Great Falls, Trump brought up Warren’s Native American heritage yet again and claimed he would force the senator to take a DNA test. “We have to do it gently, because we’re in the #MeToo generation,” he said between laughs.

Warren responded on Twitter: “Hey, @realdonaldtrump: While you obsess over my genes, your Admin is conducting DNA tests on little kids because you ripped them from their mamas & you are too incompetent to reunite them in time to meet a court order. Maybe you should focus on fixing the lives you’re destroying.”

The cartoon, which has previously featured tons of queer representation, officially made history on July 4 when Ruby proposed to Sapphire onscreen, making the pairing the first same-sex couple to become engaged onscreen on all-ages television. Creator Rebecca Sugar called the proposal “years in the making.” Read more on IndieWire, and watch the scene below:

Elizabeth Warren's Fight Is Our Fight

'Steven Universe' Is The Feminist Cartoon Everyone Should Watch