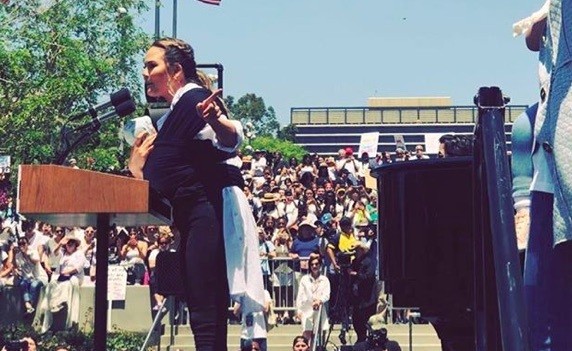 Our favorite political celebrity Chrissy Teigen spoke out at the Keep Families Together Rally in L.A. this weekend, bringing her infant son Miles onstage and speaking proudly about her experience as the daughter of an immigrant, Cosmopolitan reports. Teigen gave a passionate speech about how “immigrants don’t come here to take from us, they add to what makes America special.” Read more at Cosmopolitan.

For all of Trump’s talk about “criminal aliens,” the call center he set up to help victims of immigrant criminals does not have much work to do, reports Buzzfeed News. Call logs and data from the Victims of Immigration Crime and Engagement Office, aka VOICE, demonstrate that over half of the calls the center receives are “unrelated” to the office’s mission. Shocking! Read more at Buzzfeed News.

Canadian Prime Minister Justin Trudeau gave a comment for the first time about the allegation that he groped a woman at a music festival in 2000, the Guardian reports. Trudeau told reporters that he didn’t “remember any negative interactions that day at all.” Maybe it just wasn’t negative for him? Read more at the Guardian.

Determined to celebrate pride, LGBT activists marched in the Istanbul Pride parade even though the Turkish government enforced a ban on the festivities, the Telegraph reports. The police arrived and fired rubber bullets and tear gas at parade-goers to get them to disperse, citing that they “could not take steps to secure their safety and did not find it appropriate for the Pride Walk to take place.” Pretty ironic, isn’t it? Read more at the Telegraph.

The alternative rock frontman has aligned with the Gay, Lesbian and Straight Education Network (GLSEN) to help fund LGBT clubs for American high schoolers, the Independent reports. Urie said in a statement that he “felt the time had come for [him] to join [his fans] boldly, to bring that energy and power to bear on the huge challenges facing our whole society.” Read more at the Independent.

Senator David Leyonhjelm is facing backlash for using sexist comments against female senator Sarah Hanson-Young, saying that she should “stop shagging men,” the Guardian reports. Hanson-Young has publicly denounced Leyonhjelm for his offensive remarks and has hired a lawyer to undergo legal action against him. Sky News, the media outlet that aired the sexist comments, is being criticized for using his remarks in a segment with the headlines “The rumours about [Hanson-Young] are well known.” Read more at the Guardian.

Today’s young girls will now get to play with Barbie the robotics engineer, demonstrating efforts by Barbie producer Mattel to inspire young girls to enter stereotypically male dominated fields such as science and technology, CBS News reports. In addition to the dolls, Barbie has partnered with Tynker, a game that allows kids to learn how to code for free, and tech nonprofit Black Girls Code, which has teaches basic programming to young girls in underrepresented communities. Read more at CBS News.