The Capital Gazette Shooter Had A History Of Harassment And Stalking: Link Roundup 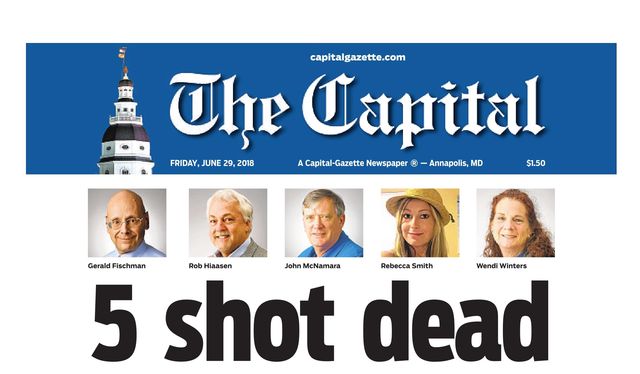 Yesterday's Annapolis, Maryland shooter had a history of harassing women, like many mass shooters do. The suspect in custody for the murder of five people at The Capital Gazette newspaper reportedly held a grudge against the newspaper because they reported about the harassment case set against him by a former high school peer. Read more at CBS News.

The Women’s March organized a sit-in to protest ICE at the Senate’s Hart Office Building yesterday, and almost 600 women were arrested. The police reported that 575 women were arrested during the peaceful protest that called for the end of ICE. Read more about the protest and the Senators that were present at Vox.

Gillibrand, the Democratic Senator from New York, stated in an interview with CNN that the government should “get rid of [ICE], start over, reimagine it and build something that actually works.” Couldn’t agree more. Gillibrand also commented that ICE should be “protect[ing] families who need our help and that is not what ICE is doing today.” Amen. Read more at CNN.

Sean Hannity, resident idiot at Fox News, tried to criticize Ocasio-Cortez’s policies but actually made people like her more. While warning the audience that “her policy positions are actually downright scary,” Hannity showed information about her platform, including that she is in favor of policies such as “housing as a human right,” "women's rights," and “support[ing] seniors.” Terrifying! Read more at Splinter.

Joel Davis, who co-founded the non-profit Youth to End Sexual Violence that gained the attention of the U.N. and reportedly a Nobel Peace Prize nomination, has been accused of sex crimes against children. Davis has been charged with attempted sexual exploitation of a minor and possession and distribution of child pornography. So horribly disturbing. Read more at the New York Times.

Tags: shooting , Trump , immigration , ICE , Kirsten Gillibrand
Support Feminist Media!
During these troubling political times, independent feminist media is more vital than ever. If our bold, uncensored reporting on women’s issues is important to you, please consider making a donation of $5, $25, $50, or whatever you can afford, to protect and sustain BUST.com.
Thanks so much—we can’t spell BUST without U.