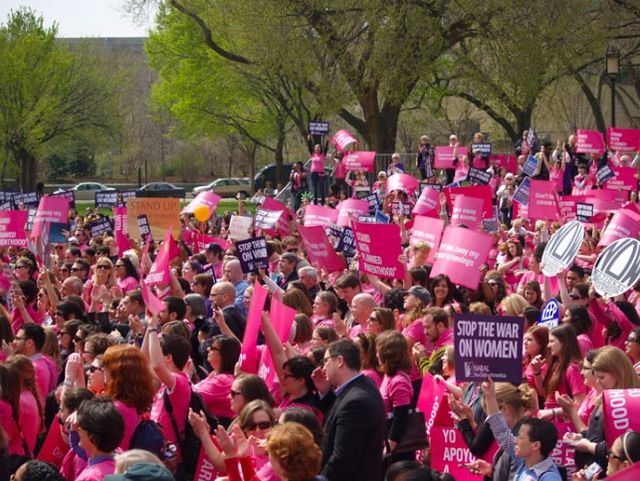 Justice Anthony Kennedy announced yesterday that he’ll be retiring next month, giving Trump the opportunity to bring a dangerously conservative, pro-life judge onto the Supreme Court. There are many rights at stake—Kennedy has been a moderate swing vote since 1988, siding with the Affordable Care Act, marriage equality, and the upholding of Roe v. Wade.

You can check out Trump’s short list of nominees on Politico, but it isn’t looking great. Trump’s a fan of William Pryor, who previously called Roe “the worst abomination of constitutional law in our history,” and Raymond Gruender, who once stated that physicians should be forced to tell individuals seeking abortions that undergoing the procedure could put them at risk of committing suicide.

Here are some actions to take right now to protect your rights, your uterus, and Americans everywhere who might lose their right to information and services.

As always, you can call your officials. Right now, many Democrats are calling on Mitch McConnell, who delayed a hearing on Obama’s Scalia replacement in 2016, to uphold his own rule and delay the process of considering Trump’s choice until after midterm elections. You can contact the Capitol Switchboard at (202) 224-3121; @Celeste_Pewter on Twitter has a great script.

With everything that’s happened this month—and, let’s face it, this past year—there are lots of funds and nonprofits out there that could use your help. If you have the means, you can help provide safe, affordable abortions for people who can't access them.

The National Network of Abortion Funds (NNAF) supports approximately 70 organizations that help finance abortions, offer transportation and translation services to those who need them, and house individuals who need to travel to clinics. You can donate to the NNAF here, or if you want to go local, find an abortion fund near you using NNAF’s map of certified funds and organizations. Many of the websites on the map also offer ways to help out and volunteer in your own neighborhood.

Kennedy’s retirement just emphasizes how much our midterm elections matter this year. Of course, remember to get out and vote—but you can volunteer to help elect local Democrats through this website, and donate via ActBlue to candidates who want to protect your right to a safe abortion, including Kirsten Gillibrand and Elizabeth Warren. The website will let you allocate your donation to the Senator(s) of your choice, or split your funds evenly.

Seriously! Make sure to do your research, though, because morning after pills do expire—but typically have a shelf life of several years, according to Planned Parenthood reps.

If an intrauterine device is something that you’ve considered, you should definitely schedule an appointment as soon as you can. Not only could your right to a safe abortion be restricted, but in just a year, access to IUDs and other forms of birth control might be compromised, too, reports BuzzFeed. IUDs are more than 99% effective, and are currently free or relatively inexpensive with most health insurance plans—but might not be for much longer.

Book an appointment and learn more information at your local Planned Parenthood.

Activists Explain Why Abortion Is A Human Right