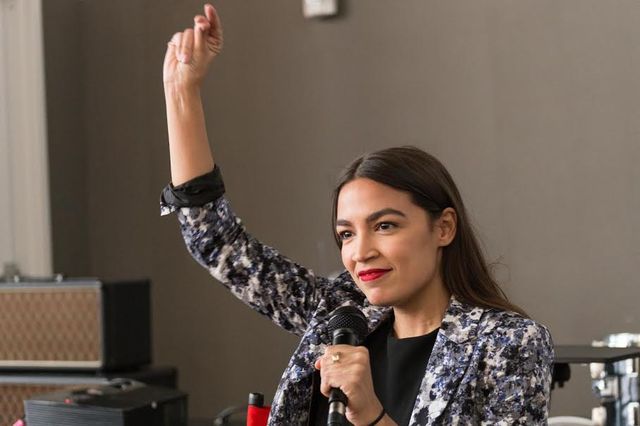 28-year-old Democratic candidate Alexandria Ocasio-Cortez won Tuesday night’s election against Democrat Joe Crowley on a progressive, anti-establishment platform, advocating issues including Medicare for all, abolishment of ICE, and rejection of corporate funding of political affairs. We were honored to have Ocasio-Cortez speak at the BUST Holiday Craftacular in December (photo above). Read more about her victory at BuzzFeed.

While seeking asylum in the US, an immigrant woman crossing the Rio Grande was told by a border agent that if she and her accompanying 12-year-old daughter didn’t return to Guatemala, she would face a year of jail time while her daughter would be put up for permanent adoption in the U.S. Read more at The Daily Beast.

Senator Elizabeth Warren returned from the McAllen Customs and Border Protection processing center with a detailed account of traumatic conditions at the facility, including descriptions of caged children and psychological torture. Read more at Jezebel.

Alison Ettel, CEO of the dog cannabis company Treatwell Health, resigned Tuesday after footage went viral of Ettel calling the police on her 8-year-old black neighbor, who was selling bottled water to fundraise a trip to Disneyland. Read more on The Root.

New data published in the Harvard Business Review finds that despite the common wage gap explanation that women are less likely to ask for salary raises, women negotiate as often as men, but only receive a raise 15% of the time while men receive raises 20% of the time.

Justice Sonia Sotomayor spoke before the Supreme Court majority on Tuesday morning, giving her dissent to the ruling upholding Trump's travel ban. She spoke about the failings of safeguarding religious neutrality in the First Amendment, criticizing the court decision as motivated by hostility towards the Muslim faith. Read more at The New York Times.

DC gay bar Pitchers announced the opening of a lesbian bar in the venue’s basement, called A League of Her Own. The space, the first and only bar reserved for queer women in the city, is slated to open at the end of the month, Popville shares.

K-Pop star Holland, the first openly gay pop idol in Korea (and who featured a same-sex kiss in his debut music video) spoke out against bullying and mental health issues he faced after coming out in his profile in the Dazed 100. Read more at Dazed.

Maxine Waters Says She "Has No Sympathy" For Trump Administration Members Complaning About Being Confronted In Public: Link Roundup

Tags: link roundup
Support Feminist Media!
During these troubling political times, independent feminist media is more vital than ever. If our bold, uncensored reporting on women’s issues is important to you, please consider making a donation of $5, $25, $50, or whatever you can afford, to protect and sustain BUST.com.
Thanks so much—we can’t spell BUST without U.