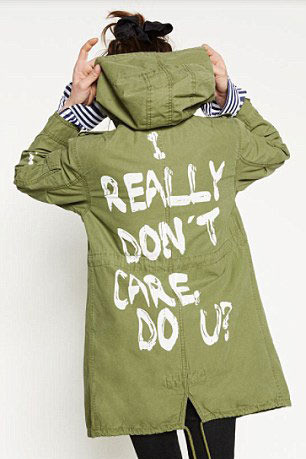 According to Her Jacket, Melania Doesn’t Care About Immigrant Children

Further proving that the White House is spiraling into a weird circus act, First Lady Melania Trump wore a jacket that said “I REALLY DON’T CARE, DO U?” to board a plane to visit immigrant children detained in Texas. There are always new lows in the Trump administration. In response, Wildfang, a clothing brand founded and run by women, has released a shirt that says "I REALLY CARE, DON'T YOU" with all proceeds going to RAICES, an immigration non-profit. Read more at CNET.

Cynthia Nixon is not holding back when it comes to her criticism of ICE. The New York candidate for governor called ICE a “terrorist organization” and called for it to be disbanded. Read more at The Cut.

Years After Publication, A Writer Apologizes For Ignorance About Trans Identity of Subject

25 years after publishing a piece about the death of a transgender man Brandon Teena (whose story was told in Boys Don't Cry), journalist Donna Minkowitz opens up about what she wished she had known at the time. Minkowitz apologizes for assuming that the transgender man was actually a lesbian whose previous experience with sexual abuse led him to disassociate from his “female” identity. Read more at The Village Voice.

At 15 years old, Dajerria Becton, who is black, was brutally apprehended by a white police officer at a pool party in 2015. The video of her assault went viral, and the officer that attacked her has since resigned. On Wednesday, she finally received a settlement of $184,850, and her attorney is throwing a pool party for her to celebrate. Read more at The Root.

Stephanie Beatriz opens up about her bisexuality, detailing how even though she is marrying a man, that does not mean that she is straight, in a personal essay for GQ. The Brooklyn-99 actress also discusses how bisexuality is often invisible in the LGBTQ, community and how she is using her fame “to speak openly about [her] bi-ness, because of other people who may feel invisible and unsure of whether or not to come out.” Read more at GQ.

After 40 years, Iranian female sports fans can now attend World Cup viewing events after local news sources stated that women would be allowed to enter stadiums to watch livestreams of Iran’s match against Spain in the World Cup. The news went worldwide, with Spain’s team captain tweeting that even though Iran had lost the match, Iranian women were “the ones who won.” Read more at The Huffington Post.

Demi Lovato Opens Up About Breaking her Sobriety in New Song

In a heartbreaking new song, pop superstar Demi Lovato reveals that she has relapsed after six years of sobriety. In her lyrics, Lovato apologizes to her family and fans saying, “I wanna be a role model, but I’m only human.” Read more at Entertainment Weekly.

Nominate a Woman to Be a New Monument in NYC

The organization Women.nyc is launching a campaign “She Built NYC” that allows for people to nominate New York women, events or organizations to be erected as monuments around the city. Nominations are open until August 1st, so get going! Read more at The Cut and nominate at women.nyc/she-built-nyc.

Is Melania Trump Trying To Profit Directly From Being First Lady?