We Still Don't Know Where The Detained Migrant Girls Are 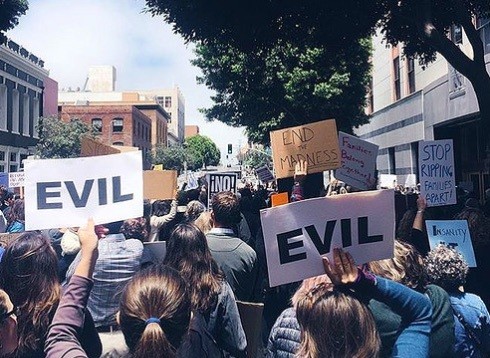 In early May, Jeff Sessions announced the Trump administration’s “zero-tolerance policy” for immigrants seeking asylum. A month later, officials with the Department of Homeland Security confirmed that 1,995 children had been separated from their families at the border, a number that continued to increase to over 2,300 just the next week. A group of journalists visited one of the all-male facilities in Brownsville, T.X. on June 13, and since the visit, the pictures have gone viral: creepy Trump murals, children in cages. As many have noticed, though, the pictures all feature boys aged 10 to 17, and there is still little to no information about any of the girls currently in custody. Inspired by female lawmakers around the country, users online are asking: #WhereAreTheGirls?

During a Monday news briefing, the Department of Homeland Security Secretary Kirstjen Nielsen was asked where the young girls were being detained. She said that she didn’t know. Since the children in custody were placed into the same system as children arriving alone at the border, Nielsen explained, the question should be redirected to the Department of Health and Human Services. (You can find the full transcript of this exchange on the White House’s website.)

Health and Human Services spokesman Kenneth Wolfe told the Miami Herald in an email that, as of Tuesday, 11,786 children were in the system, over 3,000 of them female. We know that several hundred girls have been sent to co-ed shelters in Homestead, F.L. and Bristow, V.A., but there’s an unknown number still unaccounted for, according to the Herald. Three lawmakers in Florida have tried to access the Homestead facility this week, and were all denied entry.

Jacob Soboroff, the MSNBC correspondent whose reportage of the shelters’ prison-like conditions spurred a national outcry, has shared on Twitter that he and other reporters have also been unsuccessful in trying to visit girls’ shelters—and to find out where they are. The Department of Health and Human Services did offer him photos, but still aren’t granting anyone access—and to make everything weirder, the photographs in question were taken two years ago, long before the zero-tolerance policy was even initiated.

Of course, we know of a few stories: CNN reported that a 10-year-old girl with Down syndrome was separated from her family, and the National Down Syndrome Society is working with authorities to help her. In the disturbing ProPublica recording of crying children, a 6-year-old Salvadoran girl begs for someone to call her aunt.

But reporters and representatives are worried, with reason. As Florida Rep. Frederica Wilson tweeted, girls could be trafficking victims, or fleeing unsafe conditions in their hometowns. Issues including pregnancy, menstruation, and trauma from sexual assault primarily affect women, and younger women are less equipped to deal with all of the above, especially without parental support. Migrant rights activist Michelle Brané told TIME that before the Trump Administration’s policy change, these detention facilities for young women already had major issues, including a lack of easily accessible hygiene products such as pads and tampons; it’s likely that in larger centers, these items are even less accessible. Before the zero-tolerance policy, though, facilities did screen minors to make sure young women with medical and psychological needs were receiving attention and resources. Kids in Need of Defense’s senior director of communications, Megan McKenna, told TIME that it’s unlikely these kids have any kind of personalized assistance with the large influx of now-unaccompanied children, and it’s also less likely these girls would speak out to authority figures about what they need.

Yesterday evening, Congresswomen Debbie Dingell of Michigan and Annie Kuster of New Hampshire wrote a letter to the Department of Homeland Security demanding answers to questions about the young girls currently detained. 59 female lawmakers cosigned the letter, which you can check out here. Among other questions, Dingell and Kuster asked:

How many total girls are under the supervision of DHS and HHS? How many facilities are there?

What precautions are being taken to keep young girls protected from exploitation?

How many pregnant young women are in [The Office of Refugee Resettlement’s] custody? What is ORR doing to ensure that they are receiving adequate prenatal and medical care?

Please provide more information on the reported practice of forcibly injecting children with powerful psychiatric drugs, including what children are being injected with, the rationale for this practice, the number of children subjected to this.

“The American people have a right to know what is being done to ensure that these young girls are safe and being properly cared for,” wrote Dingell and Kuster.

Keep #WhereAreTheGirls trending on Twitter, and more importantly, call your reps. Protest. Donate to legal funds, if you can. Don’t know where to start? Check out BUST’s guide to how you can help families separated at the border here.

There's No Plan For How To Reunite Immigrant Parents With Their Children: Link Roundup

New York Is Suing The Trump Administration For Separating Families At The Border: Link Roundup