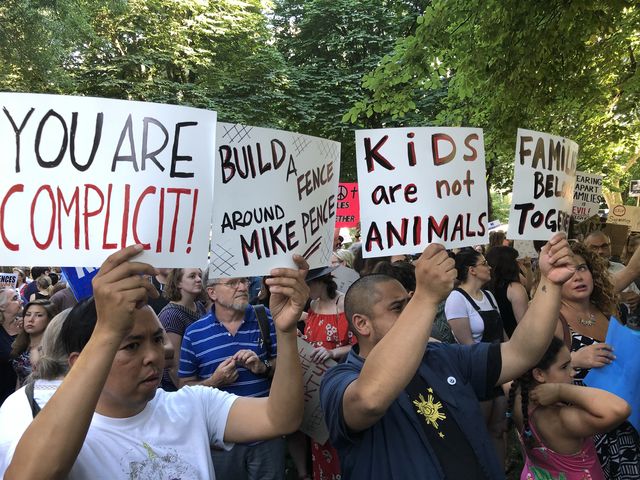 If you are horrified by the news of families being separated at the border: good, you should be. If you are not horrified, you must be misinformed or not paying attention. Understanding and spreading the correct information is one of the first ways you can start to help.

The Trump administration is telling people that families are being torn apart due to a law put in place by Democrats and they are simply “following orders.” This is fake news. But does it sound familiar? Maybe that's because that was the excuse used during the Nuremburg trials from Holocaust-era Nazis.

The separation of families is due to two new policies put in place by the Trump administration. The first policy is that any migrant family attempting to enter the U.S. without border inspection will be criminally prosecuted. Parents are incarcerated and children are taken to tent camps or an abandoned Walmart. Once the parents get out, they have a hard time reuniting with their children and are often deported while their children remain in U.S. custody.

The second policy involves placing parents who have gone through legal asylum-seeking procedure at a border-entry location in immigration detention centers, which are mostly indistinguishable from jails, until their asylum cases are adjudicated. Because there are long-standing civil rights case stating that children are not allowed to be kept in this type of detention facility, so children are taken to separate facilities. Needless to say, the Trump administration is detaining parents who have credible asylum claims and have not violated any laws in trying to pursue a better life in the U.S. They are also taking away their children in the process. (Read more at Slate.)

So, how do we do more than sit around around retweeting our disgrace and feeling complicit? What can we do to tangibly help? So glad you asked! 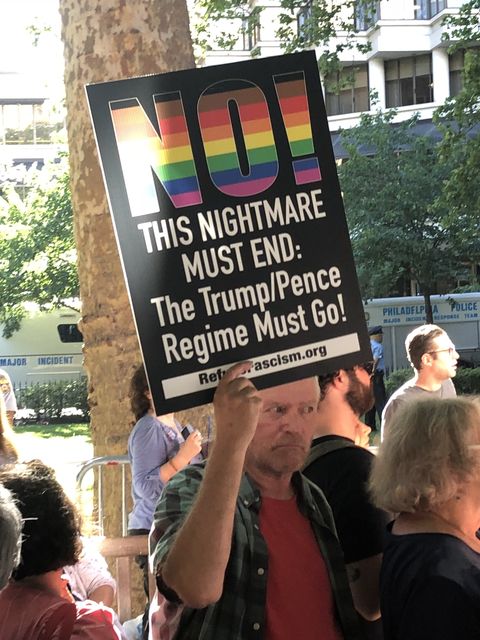 Many organizations that provide legal services and other resources for immigrants are run entirely, or at least primarily, on donations. Here are some of the many credible organizations that could use your donation, if you're able.

ActBlue has gathered together several notable organizations together; you can donate to ActBlue and your donation will be divided between the organizations.

The Women’s Refugee Commissionadvocates for the rights and protection of women and children fleeing violence and persecution. Donate hereand read their list of other ways to help here.

Al Otro Lado is a binational organization that works to offer legal services to deportees and migrants in Tijuana, Mexico, including deportee parents whose children remain in the U.S. They also need volunteers.

Kids in Need of Defense works to ensure that kids do not appear in immigration court without a representative. They also lobby for policies that advocate for children’s legal interests.

The ACLU is, as always, fighting the good fight right beside us.

Pueblo Sin Fronteras is an organization that provides humanitarian aid and shelter to migrants on their way to the US.

RAICES Family Reunification Bond Fund goes towards paying immigrations bonds, which range from $1,500 to $50,000, and would allow families to remain together until their hearings.

Fronterizo Fianza Fund is also helping families pay the bond needed for detained immigrants to be released and reunited with their family.

Freedom for Immigrants has been a leading voice in opposing immigrant detention.

The Michigan Immigrant Rights Center represents the immigrant children places in foster care. About 2/3 of their cases are related to family separation.

The National Immigrant Justice Center represents parents who have been separated from their families as a result of aggressive enforcement. They also advocate for detained children and adults facing removal.

Together Rising is a Virginia-based organization currently providing legal aid to 60 migrant children who were separated from their parents and are being detained in Arizona.

Border Angels is a California-based organization supporting San Diego’s immigrant population and working on other issues related to the US-Mexico border.

Neta is a grassroots organization in Texas assisting asylum seekers on either side of the border.

South Texas Pro Bono Asylum Representation Project (ProBAR) is a project of the American Bar association that is currently supporting over 1,000 children who were separated from their parents and are being held in detention centers across South Texas.

If you don’t have money to spare but you have available time, below are some places that could really use your help and support. Many of the organizations below also need donations, so if you are interested in their mission but are not able to volunteer, check out how to donate on their websites.

Immigration Law Help will take your zip code and show places in your area looking for help.

Families Belong Together is planning nationwide protests on June 30th. Find the closest one to you here.

The Kino Border Initiative provides aid to refugees and migrants on both sides of the border. Check out their list of useful supplies and send what you can here.

The American Immigration Lawyers Association will be sending around a volunteer list for immigration lawyers to volunteer to represent parents in their asylum screening, bond hearing, and ongoing representation.

RAICES is the largest immigration nonprofit in Texas, offering free and low-cost legal services to children and families. Donate or volunteer.

Immigrant Justice Corps is the nation’s only fellowship program dedicated to immigrant representation. Some fellows work at the border, and others provide legal aid to families resettling in New York.

The Florence Project is an Arizona-based protect offering free legal services to men, women, and unaccompanied children in immigration custody. They need legal volunteers and donations.

Texas Civil Rights Project is seeking volunteers who speak Spanish, Mam, Q’eqchi’ or K’iche’ and have paralegal or legal experience.

CASA in Maryland, DC, Virginia, and Pennsylvania are litigating and advocating for representation of minors.

International Refugee Assistance Project (IRAP) organizes law students and lawyers to create legal and human rights efforts for refugees and immigrants. They also just filed a suit against the cancellation of the Central American Minors program. 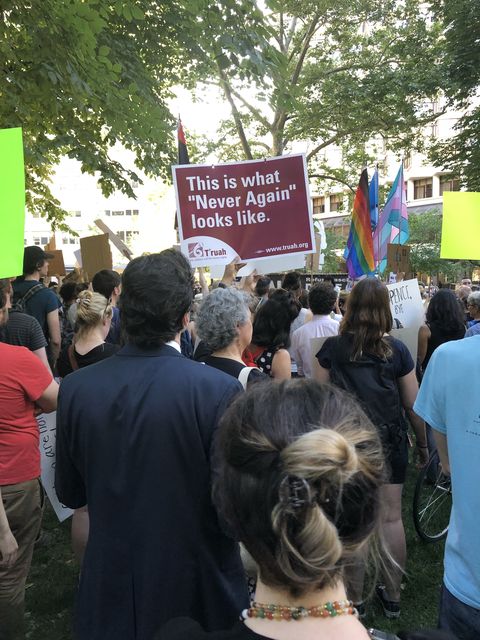 If you don’t have extra time or money but still want to help, CALL YOUR REPS. It will take 30 seconds to let them know that they must support change or be voted out!

Dial 202-224-3121, state your zip code, let them know you support SB3036 (Keep Families Together Act) and S2468 (Fair Day in Court for Kids Act of 2018). If you are anxious about what to say, use this guide when calling your representatives. Let them know that you want to end family separation AND to repeal the federal law that makes illegal entry and reentry a crime.

Every House seat will be contested this November, as well as enough Senate seats to flip the house back to Democratic control. So, let them know what their constituents stand for. 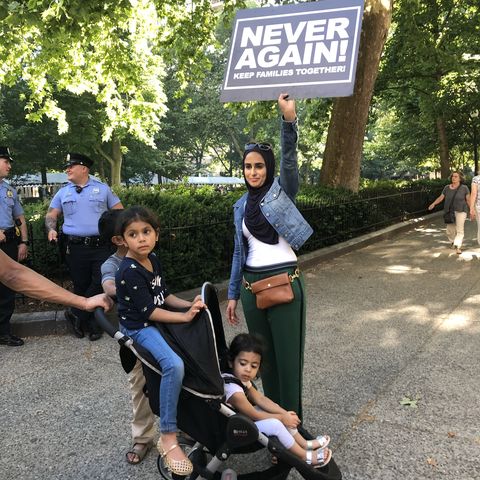 Images: June 19th protest in Phildelphia while Mike Pence spoke nearby at GOP fundraiser, taken by Robert Naseef and used with permission

This recording Of Immigrant Children Forcibly Separated From Their Parents Is Hard To Listen To, But You Need To

Tags: Immigration , Donald Trump , Jeff Sessions , Families Belong Together
Support Feminist Media!
During these troubling political times, independent feminist media is more vital than ever. If our bold, uncensored reporting on women’s issues is important to you, please consider making a donation of $5, $25, $50, or whatever you can afford, to protect and sustain BUST.com.
Thanks so much—we can’t spell BUST without U.