Amandla Stenberg Comes Out As Gay, "With A Romantic Love For Women" 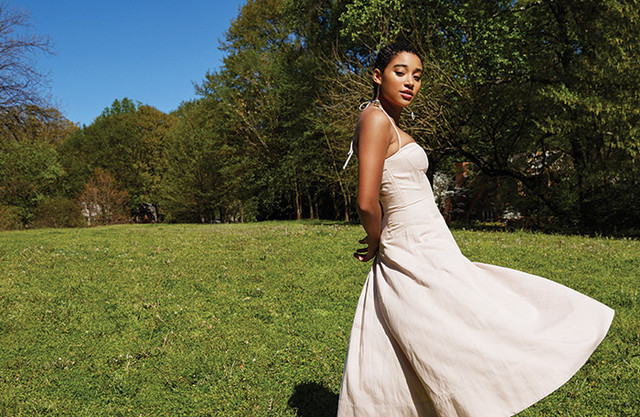 Stenberg identifies as nonbinary and uses both she/her and they/them pronouns; she requested we use she/her pronouns when writing about her in our 2017 cover story, so we'll continue to follow her request here.

In happy news this Pride month, Amandla Stenberg revealed that she identifies as gay. In an interview with fellow queer-identifying celebrity King Princess, otherwise known as Mikaela Straus, Stenberg opened up about the “profound sense of relief” that she felt when she came to the understanding that she is “not bi, not pan, but gay,” Wonderland. reports. She said:

I had a few big Gay Sob moments when I realised I was gay. One might assume that they were mournful sobs, but actually quite the opposite in my lived experience. They were joyful and overwhelmed sobs – socialisation is a bitch and a half and kept me from understanding and living my truth for a while. I was so overcome with this profound sense of relief when I realised that I’m gay – not bi, not pan, but gay – with a romantic love for women. All of the things that felt so internally contrary to my truest self were rectified as I unravelled a long web of denial and self deprivation.

What is so important about this interview is the happiness with which Amandla speaks about her sexual identity. She states how her sexuality is “a part of myself I was born with and love deeply.” She tells King Princess that after she got over her past and how she felt forced to repress her feelings, she “found the freedom to live my best life waiting for me.”

Stenberg also discussed how her sexuality has allowed her to experience "a deep well of unbounded and untouchable love free from the dominion of patriarchy."

The actor and activist also went on to discuss the role of the media in helping people realize their sexualities, stating that if she had seen more examples of black gay women when she was young she would have been given the opportunity to understand her own sexuality earlier. She states that now, “seeing myself reflected in [black gay women in media] has been a huge aid in seeing myself as whole, complete, and normal.”

Amandla Stenberg On Her Gender, Her Activism, And Why She'll Never Have A Smartphone: BUST Interview

“Everything, Everything” Director Stella Meghie: “See The Kind Of Movies You Want To See Get Made” BUST Interview