Who Is Millicent Fawcett? Learn About The Suffragist In Today's Google Doodle 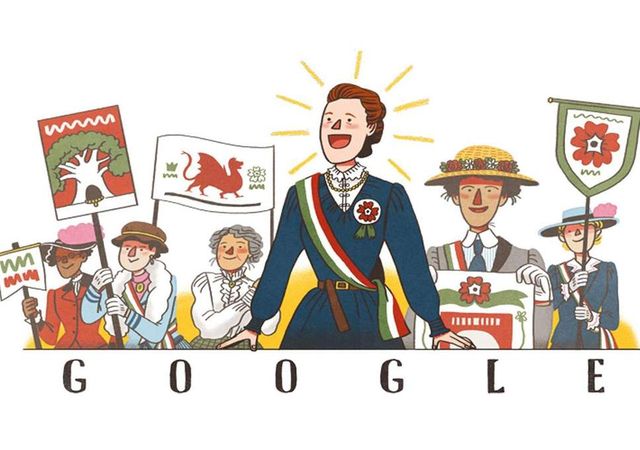 Google is celebrating the 171st anniversary of suffragist Millicent Fawcett’s birthday with a Doodle. But, who is she?

Fawcett was a feminist from a young age. During her childhood, Fawcett’s sister Elizabeth Garret Anderson—who later became Britain’s first female doctor—introduced her to Emily Davies. Davies was a trailblazing British feminist fighting for the right to vote and women’s right to university access.

When she was 19, Fawcett heard a speech by the radical Member of Parliament, John Stuart Mill, who was an early supporter of universal women’s suffrage. Inspired by his politics, Fawcett became involved in his campaign and was the secretary of the London Society for Women’s suffrage.

By 1867, Millicent had gotten married and had a daughter, but this did not stop her lifetime of activism. In 1868, she joined the London Suffrage Committee and spoke at the first public pro-suffrage meeting which was held in London. Fawcett formed the National Union of Women’s Suffrage Societies in 1897, which was the largest organization of its kind, and it founded as being a non-violent group of activists. Fawcett was the president of the organization until 1919. She also established the International Women’s Suffrage Alliance to bring together women all over the world who were fighting for the right to vote.

Her other notable achievements include helping to found the all-women Newnham College at Cambridge University' lobbying for the criminalizing of incest and child abuse; lobbying for the repeal of the Contagious Disease Act, which had a negative impact on sex workers; and investigating Britain’s use of concentration camps in South African during the Boer War.

She died in her home in 1929—one year after all women over 21 were granted full voting equality in Britain. 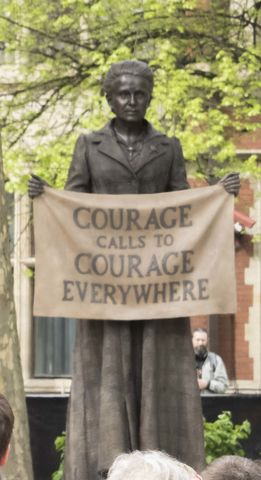 Millicent Fawcett was recently honored with the unveiling of a statue in Parliament Square in London. In that statue she is holding up a piece of one of her most famous quotes “courage calls to courage everywhere, and its voice cannot be denied.” via Wikimedia Commons

"Beyond Suffrage": The Journey Of Women Activists From Suffrage To The Resistance

How Women Are Using Color To Protest In 2018

Tags: suffragette , suffrage , votes for women , Millicent Fawcett , google , feminism
Support Feminist Media!
During these troubling political times, independent feminist media is more vital than ever. If our bold, uncensored reporting on women’s issues is important to you, please consider making a donation of $5, $25, $50, or whatever you can afford, to protect and sustain BUST.com.
Thanks so much—we can’t spell BUST without U.