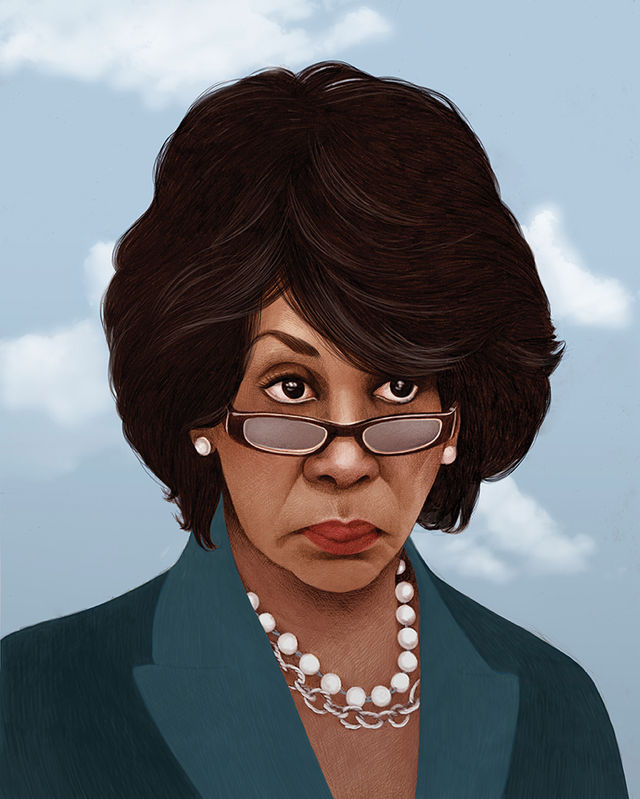 Congresswoman Maxine Waters currently serves as the U.S. Representative for California’s 43rd district. But in these troubled political times, she also serves as a beacon of hope, a force for change, and a powerful voice for the #resistance.

Representative Maxine Waters, the former chair of the Congressional Black Caucus and the senior-most black congresswoman in the House, has been speaking truth to power for over 25 years. When the intrepid lawmaker is not making headlines for being one of the lone righteous voices advocating for the impeachment of Donald Trump, she’s taking action on Capitol Hill and in her home district—South Central, Los Angeles.

A modern-day oracle who has been described as “always on the right side of history” by author and trans-advocate Janet Mock, Waters is a visionary who has championed the ideas and leadership of next-generation thinkers throughout her career. Long before she gained internet notoriety for “reclaiming her time” while questioning Trump’s double-talking Treasury Secretary Steven Mnuchin, she was an advocate for divestment against apartheid-era South Africa, a sage stateswoman who opposed the Iraq War, and has remained an unflinching force against injustice.

On a Friday morning in September, I caught up with the policymaker over the phone. Before we got started, I asked her if I could join the chorus of millennials who affectionately refer to her as “Auntie Maxine” out of admiration and respect, and she obliged. The Missourian-turned-Californian, now 79, then shared her pro-tips for running for office, campaigning for issues that matter, laughing at haters, and getting Trump out of the Oval Office.

Your high school classmates in the ’50s predicted you’d become Speaker of the House during a time when it was hard to imagine a woman of color in that position. What leadership strengths have you always had that you think helped you in your work and life?

I came from a large family. I was one of 13 kids and we were always in a friendly competitive situation where we were competing for our mother’s attention, and who was going to wear what clothes and when. We always participated in sports. I attended the community center in the evenings and almost every day in the summer. I played basketball and volleyball and I’m a good swimmer. Those activities gave me the ability to meet challenges, feel confident enough to get people to listen to me, feel strong enough to speak up to people in power, manage difficult situations, and never back down just because I am a woman.

How did you become politically active?

I’ve always been interested in politics. My mother, although she was uneducated, was always interested. She followed the news and the ward chairmen who made the rules in St. Louis. I learned from her involvement in politics. After I moved to California, I started working at Head Start [a pre-school program for low-income families] after the federal government adopted a “war on poverty” initiative to help create opportunities for people who were working towards a better life. I became an assistant Head Start teacher and we lobbied to ensure we got the resources we needed, like supplies and better pay for teachers. This brought me into contact with elected officials and led me to become a better organizer. During those days, the people who organized around education and welfare rights were mostly African-American women who were bold and outspoken, and who went to city hall and school board meetings. I fell in love with them and what they stood for. I internalized what I learned from them.

Later I went to work for a city councilman and became his chief deputy. And then when a legislator in Sacramento decided to retire, I was urged by women to run for that office. We organized a campaign that was run by women, and we did creative and innovative things because we were running against the establishment, we were running against the men, and the seat I was running for had already been identified by the establishment as one for a man to run for. We went up against them, and that was the first office I was elected to, the California State Assembly, back in 1976.

What does feminism mean to you?

I served for 14 years [in the California State Assembly], and during that time I became involved in the feminist movement. I was involved in the National Women’s Conference that was created when President Carter was elected. All these women, led by Bella Abzug and Gloria Steinem and Patsy Mink, got together to exercise influence on the Carter administration. I met Gloria Steinem at that conference and she invited me to serve on the Ms. Foundation board. Working for the Ms. Foundation, I had the benefit of seeing proposals coming in from various women’s organizations. I took some of those proposals to the California legislature, and that helped me develop policy around the ideas that were being shared. Serving on the boards of both the Ms. Foundation and on the Essence Magazine board taught me a lot about negotiation and how to analyze public policy. Now I’m grounded and know a lot about who I am. And I try to use my voice to say things I believe in, even when it is not popular.

You have said you will not be intimidated and you always prevail. That inspires me and many other women—specifically black women—every day. I’ve been told I am too angry, too loud, and too much for refusing to make myself small to make others feel comfortable. How do you keep going in the midst of attacks, threats, and insults to your dignity and humanity?

First of all, women should try very hard to get in touch with themselves. Who am I? What do I really like? What would I like to do? Who are the people I respect and look up to and what qualities do they have that I can internalize? Build confidence, get in touch with yourself, get grounded, examine yourself and be who you want to be. Put yourself in places where people are doing what you want to do. African-American women particularly will be called aggressive. They will talk about your looks and will say anything. But once you have confidence and you like yourself, it doesn’t matter what other people are saying. And often when you look at the people who are saying it, you will start laughing, and you’ll understand more than anything that they don’t have the right to say what they are saying. When you can laugh about people who have the audacity to criticize you, you are almost there. People who criticize you want to shut you down, want you to go away, and don’t know how to deal with you intellectually. I get criticized. The right wing has organized to try and shut me down. It doesn’t matter to me. I keep right on going.

You spoke at the historic Women’s March, and you also partnered with their team on the Women’s Convention whose theme, “Reclaiming Our Time,” was inspired by your words. Tell me about being part of the Women’s March movement.

I was thrilled to be involved with the Women’s March following the inauguration. It was inspiring. It was exciting. I was a part of the early feminist movement where we were considered “bra burners” and “man haters” and on and on. I’ve always been concerned that there’s been a gap between what we were doing back then, and now. It seemed as if there was a move to encourage women to have careers in corporations where the rules were: you dress well, you do well, you speak well, and you don’t make any waves because you don’t want the men thinking you hate them. There was a big lull in the feminist movement but it has now been reinvigorated. That march with over 750,000 women sent a strong message that women do care. We care about freedom of choice and the ability to have all different kinds of careers. It was a great experience for the country and for women.

Your commitment to fighting for the impeachment of Donald Trump is steadfast and unapologetic. How can everyday people join the fight?

People say he should be impeached, but I don’t have people adopting resolutions of impeachment and sending them to the House and the Senate. Just think, if there are organized efforts, and you get people to sign in on a resolution of impeachment from women’s organizations, labor unions, and churches, it would have a great impact on both the House and the Senate and with both Democratic and Republican leadership. They need to see these letters and organized efforts to support impeachment coming in. Obstruction of justice and collusion are the basis of why we want impeachment, and others are adding Joe Arpaio [the former sheriff who Trump pardoned] and the lack of response in Puerto Rico to the list. We have put together our resolution on impeachment, and it includes the basics of the emoluments [the clause of the Constitution that restricts members of the government from receiving gifts from foreign states without the consent of the United States Congress]. Let’s keep spreading it around to House and Senate leadership, both Democrat and Republican.

Maxine Waters On Donald Trump And Bill O'Reilly: "They Need To Go To Jail"

Maxine Waters: "I Am A Strong Black Woman And I Cannot Be Intimidated"

Maxine Waters Refuses To Quit Her Fight Against Trump