This Activist Group Is Fighting For Equality In The Witchiest Way 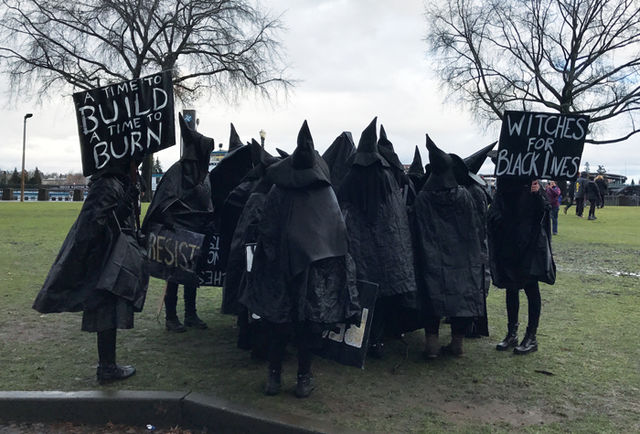 Pointy hats, black cloaks, and face-covering veils — the anonymous activists in W.I.T.C.H.’s (Witches’ International Troublemaker Conspiracy from Hell) Portland, OR, chapter strike a macabre and powerful visual chord whenever they rally to “take down the heteronormative, cisnormative, white-supremacist patriarchy and the capitalist system.”

“There’s definitely a hunger for connection to witchcraft that’s evident in pop culture and on social media,” says an unnamed source within the group. “We hope to divert some of that energy toward social justice.” Portland’s incarnation of W.I.T.C.H. formed in November 2016, inspired by a 1960s feminist activist group of the same name that, among other things, glued the locks of the New York Stock Exchange shut. But while the original W.I.T.C.H. focused almost exclusively on feminism, today’s members assemble to support a range of causes, including protecting the environment, immigration rights, and Black Lives Matter. “It’s been 50 years, but here we are still fighting for access to abortion and birth control, equal pay, justice for rape survivors, and other feminist issues,” says their spokeswoman. “Meanwhile, every day, black people are being murdered by police, ICE is destroying families, trans women live in fear for their lives, and slavery is still legal in the United States through the prison industrial complex.”

W.I.T.C.H. PDX uses ritual, theatrics, and performance art to draw attention to intersectional causes which, they say, lie outside the bounds of mainstream feminism. “We find a lot of power in the symbol of the witch,” says their spokeswoman. “It’s a way of reclaiming the outcast status this system puts on those of us who don’t fit into it.” For more information or to start a branch of W.I.T.C.H. in your area, visit witchpdx.com.

"Sabrina The Teenage Witch" Is Returning In New, Goth Form