Linda Sarsour On The Women's March And What's Next For The Resistance: BUST Interview 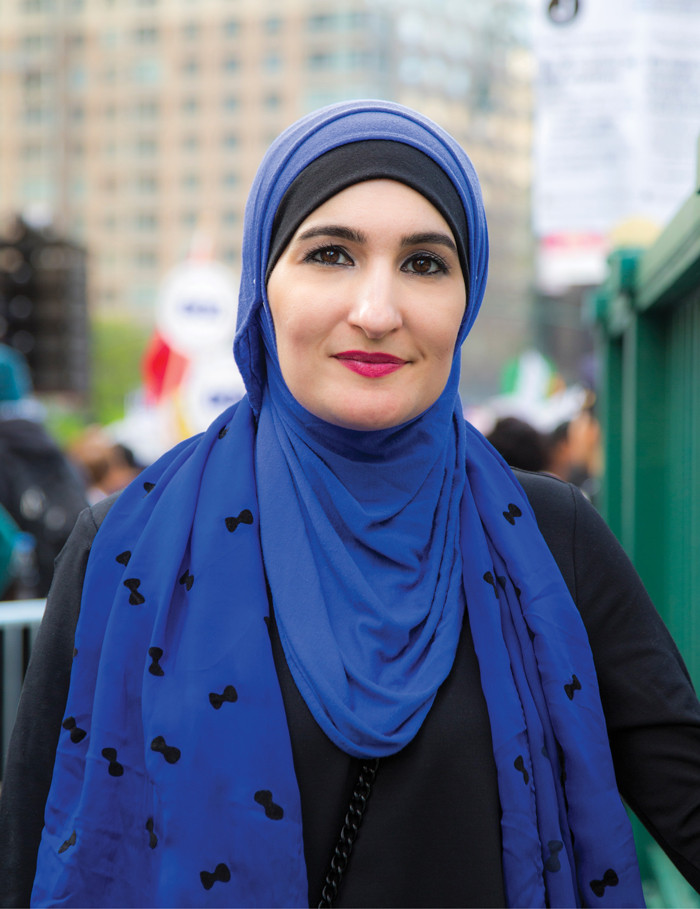 Social justice activist and Women’s March co-chair Linda Sarsour gets real about hard conversations with her kids, what’s next for the movement, and why the resistance is female

You may not know Linda Sarsour by name, but it’s likely you recognize the 37-year-old civil-rights champion as one of the most visible co-chairs of the Women’s March on Washington. The Brooklyn native, a daughter of Palestinian immigrants, began her career in activism by joining the Arab American Association shortly after 9/11, while her three children were small, eventually becoming their executive director. And advocating for the Muslim community—she was instrumental in getting N.Y.C. public schools to observe two important Islamic holy days—was just the beginning. She’s a defender of women’s rights, a political progressive (she endorsed Bernie Sanders), and a criminal justice reform advocate as well.

As one of the Women’s March national organizers, I spent months working together with Sarsour, and quickly came to see her as the backbone of our movement. At a time when simply wearing a hijab in public is a revolutionary act, she is incredibly outspoken, making her a lightning rod for sensationalized headlines, online trolls, non-stop vitriol, and overblown controversies that try to undermine the work she does. While weathering these storms, she comes through consistently to lead and nurture. I have been enraged by the amount of hateful rhetoric she has been subjected to—she’s been unfairly accused of everything from anti-Semitism to anti-feminism—but even more painful has been witnessing the terrifying level of threat (including death threats) that she and her family have had to face. Sarsour always advocates for vulnerable communities, so it was no surprise that a large group of progressive groups launched an #IMarchWithLinda campaign to show their solidarity.

As our country grapples with extreme Islamophobia (emboldened by our current administration), Sarsour is constantly showing up not only for her own community (she helped raise funds for the burial of Nabra Hassanen, the teen murdered after leaving a Virginia mosque), but also for many others, continuously organizing for fair minimum wage, police accountability, voter engagement, women’s rights, and a myriad of other causes. She is a tireless problem solver and unflagging advocate on behalf of marginalized people. At the Women’s March, we often cited the famous Coretta Scott King quote, “Women, if the soul of the nation is to be saved, I believe that you must become its soul.” In my mind, Sarsour truly embodies this soul. Here, we sat down as friends and fellow mothers, and spoke about things Sarsour rarely gets to talk about in the press. It was a pleasure.

What is something you wish folks knew about you that no one ever asks?

I don’t get to talk about my kids enough in the press. My son is about to go to college, I have a daughter who is a junior in high school, and I have a daughter who is in seventh grade. They are the reasons I do this work. So often, people see me as this activist speaking on behalf of this whole group of people, when in reality, I’m trying to protect my children.

How does being a mom inform the work you do? How do you talk to your kids about this stuff?

Being a mom informs every part of my work. It’s why I come to the movement with a lot of love in my heart. I come to the movement seeing other people’s children as my own children. And the work I do requires a lot of hard conversations with my kids. My daughter asked me many times growing up, “Why do they hate us?” And I say to her, “No, not everybody hates us. They don’t hate you. They just don’t understand a lot of parts of you.” Being able to take how kids are feeling and contextualize that in a way that makes them feel good about themselves is important. Why do I stand up for black lives? Why do I support immigrants who are undocumented? Because it helps my kids understand that these are our neighbors, our family, our community. I invest in those hard conversations. I think it’s important.

So the big burning question is, where do you see the resistance going?

The Women’s March was the catalyst. We brought every single issue to the forefront and showed the whole world that we can say, “Black Lives Matter,” we can support our undocumented brothers and sisters, we can stand up for LGBTQIA rights and women’s rights, and we can protect our Muslim brothers and sisters all at the same time—and we can continue that work moving forward. The resistance is female. It’s led by women. It is full of radical love. It is full of fierceness and it’s gonna be consistent. We’ve already proved that. There is so much more to come.

What does it mean when you say the resistance is female?

Women bring a lot of love and language that brings people together. We have seen the power when women lead. We are always negotiators, consensus builders, storytellers, and those skills are in fact what are fueling the resistance and making it stronger right now.

The Women's March Is Building An Intersectional Movement In Detroit

Tags: Linda Sarsour , Sarah Sophie Flicker , Women's March , Women's March on Washington , resistance , resist , interview , BUST interview , activism , feminism
Support Feminist Media!
During these troubling political times, independent feminist media is more vital than ever. If our bold, uncensored reporting on women’s issues is important to you, please consider making a donation of $5, $25, $50, or whatever you can afford, to protect and sustain BUST.com.
Thanks so much—we can’t spell BUST without U.